The Fitbit Sense and Fitbit Versa 3 launched at the same time and look almost identical, but there are some important differences to know when you’re choosing the right one for you.

The key difference is that the Fitbit Sense has two extra health-monitoring features: a sensor for tracking electrodermal activity, which is an indicator of stress, and an ECG sensor, which can detect an abnormal heart rhythm that should be investigated by a doctor.

If you’re interested in taking control of your general health, or controlling your stress levels, the Sense is probably the right watch for you. If, on the other hand, you’re more interested in having a stylish watch for tracking everyday workouts, monitoring your sleep and delivering app notifications to your wrist, the Fitbit Versa 3 might have all the features you need (for a considerably lower price).

Need more info? Read on for all the differences between the Versa 3 and the Sense, so you can choose the best Fitbit for you.

The Fitbit Versa 3 and Fitbit Sense were revealed at a virtual conference in August 2020, and went on sale globally in late September.

The Fitbit Sense and Fitbit Versa 3 look almost identical, with the same square face, aluminum case, and soft silicone strap (other bands are available, and fit both devices). The only noticeable difference is a small indentation on either side of the Fitbit Sense’s screen, indicating where to place your hand to use the electrodermal activity sensor (more on that shortly).

Otherwise, the only differences are the default watch faces (which can be changed through the Fitbit app) and the choice of colors. The Fitbit Versa 3 comes in midnight/soft gold, black/black and pink clay/soft gold. The Fitbit Sense is available in  carbon/graphite and lunar white/soft gold.

One of the main differences between the two watches is the Fitbit Sense’s stress measurement sensor, which measures changes in your skin’s conductivity (electrodermal activity, or EDA), which can be indicative of physical or emotional stress.

To use it, hold your palm over the watch’s face and sit quietly for a minute. Once the time has elapsed, you’ll see how many EDA responses were recorded; the more responses, the more stress. You will also be prompted to record your mood, and the Fitbit app provides a space for you to enter any factors that have might influenced your mood or stress level. 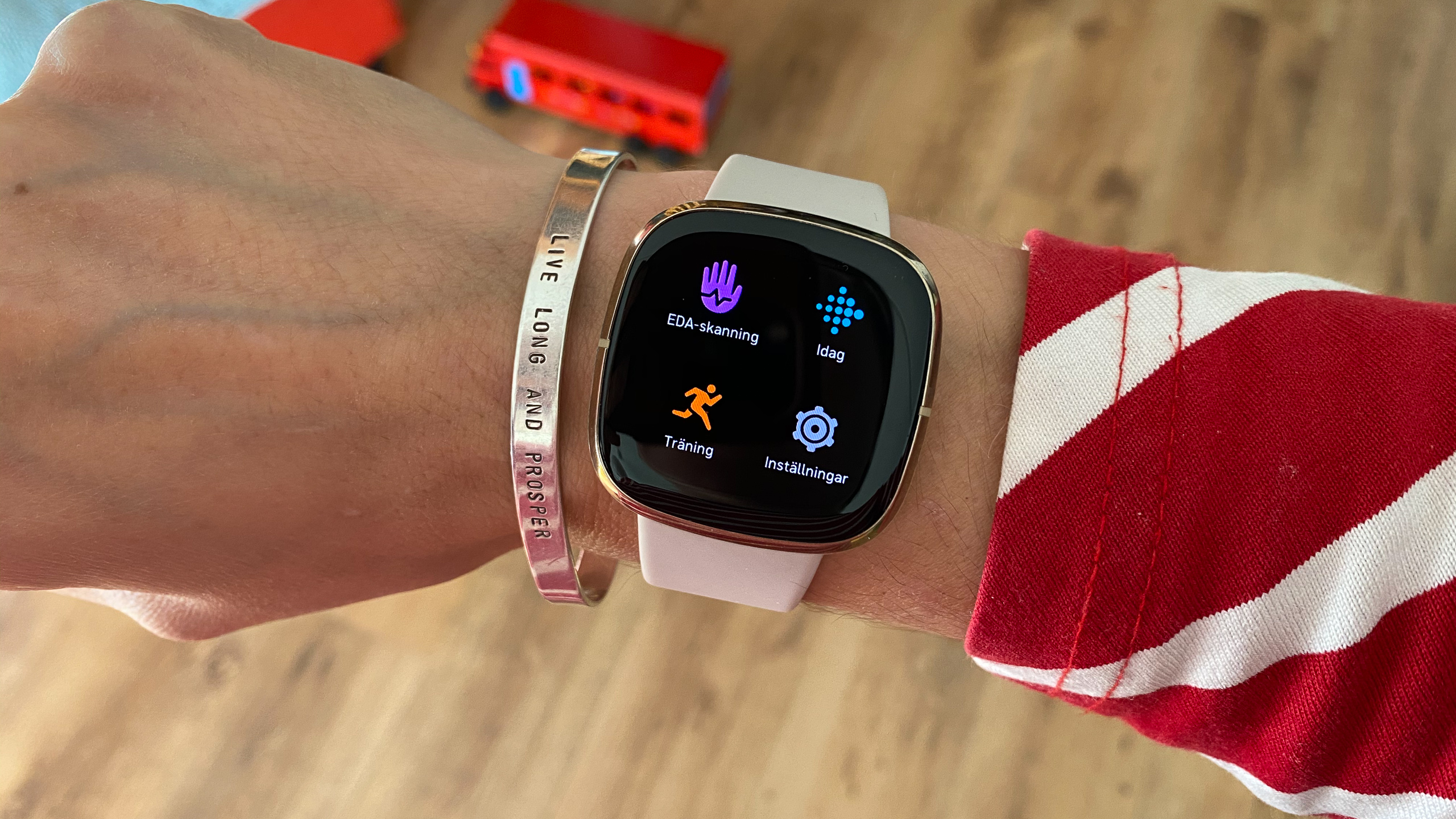 Both watches feature 20+ goal-based exercise modes, plus on-board GPS and GLONASS so you can track runs and bike rides without carrying your phone. The watches will also track your heart rate and step count throughout the day.

The Fitbit Sense and Versa 3 both have SpO2 sensors to measure blood oxygen saturation overnight. Low SpO2 can be a sign of problems like sleep apnea that should be investigated by your doctor.

Both watches will monitor your sleep stages throughout the night (light, REM and deep) and give you a report each morning showing how long you spent in each stage. The Fitbit app can provide you with tips to help you get a better night’s rest. 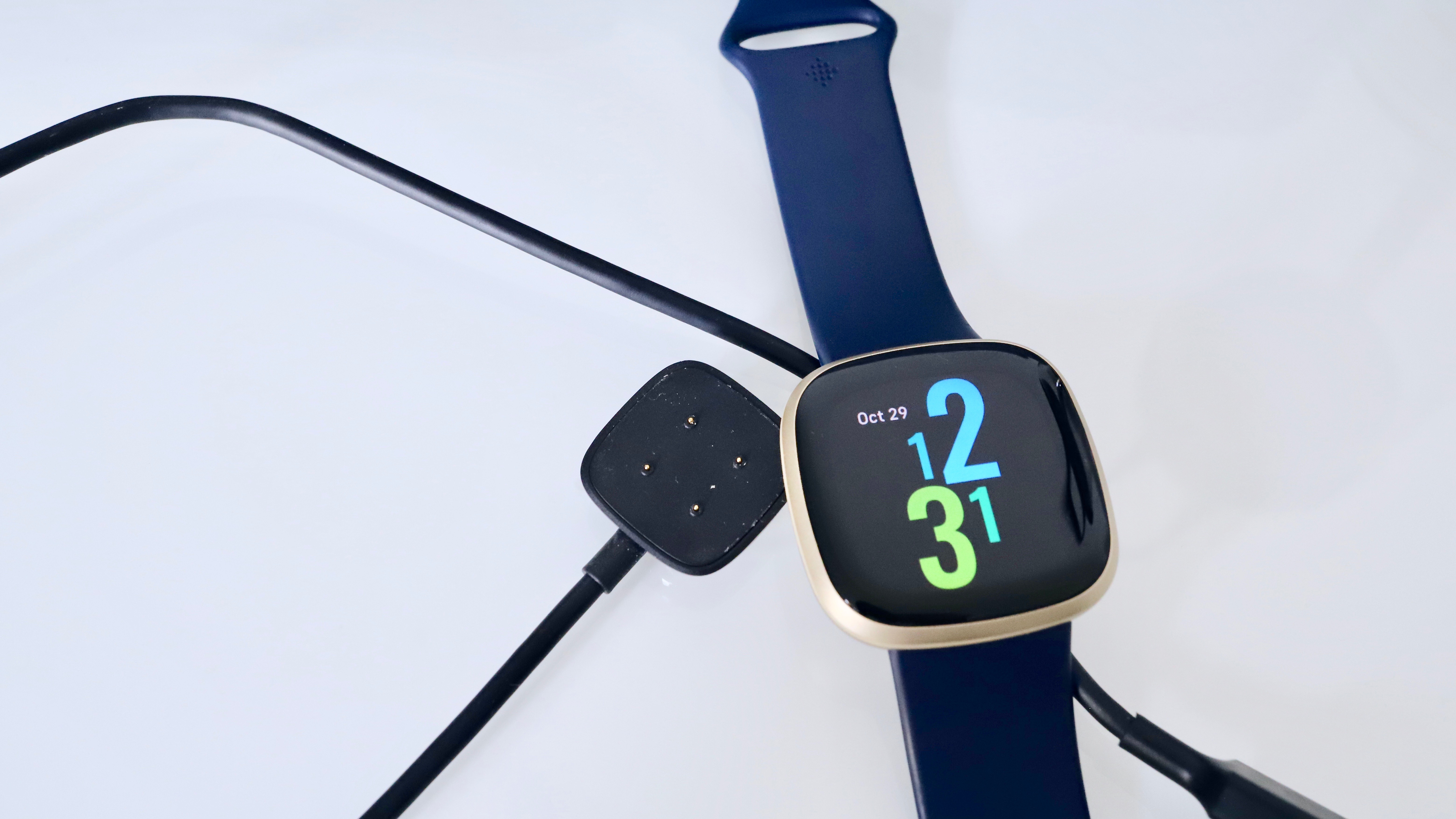 Both the Fitbit Sense and Versa 3 last around six days on a single charge (Image credit: TechRadar)

In terms of everyday smartwatch features, the Fitbit Sense and Versa 3 are pretty much identical. Both allow you to stream music and podcasts directly from Deezer, or control your Spotify playlist from your wrist. You can also receive app, text and call notifications through both devices, and make voice calls when your phone is nearby,

Both the Sense and Versa 3 support voice controls through Amazon Alexa and Google Assistant, and allow you to make contactless payments through Fitbit Pay.

You can download extra apps and watch faces for the Sense and Versa 3 through the Fitbit app.

Fitbit quotes both the Sense and Versa 3’s battery life at six days with normal use, and our reviewers found that the be accurate. Using on-board GPS will drain the battery more quickly, so you’ll need to charge your watch more frequently if you work out regularly.

This article is part of TechRadar’s Get Fit in 2022 series – a collection of ideas and guides to help get your new year’s health goals off to the right start, whatever your current level of fitness.

Faster downloads, better streaming: why a gamer’s New Year’s resolution should be a network upgrade

Faster downloads, better streaming: why a gamer’s New Year's resolution should be a network upgrade

Washington Watch: Biden talks up his efforts to tame high prices, as analysts see ‘rough’ midterm elections for him unless inflation abates