Horizon Forbidden West is all the rage. The most recent Sony exclusive to hit PS4 and PS5, Aloy’s latest adventure has been heaped with praise across the board. Its story is rich, its world is beautiful, and its technical design is just dazzling. In our review of the game, we reckoned its facial animations alone were worth shouting about, and said it’s a video game that looks lovely and plays brilliantly.

That’s especially true if you’re booting it up on a PS5. While the PS4 version will see you right, you’ll only be able to fully appreciate the detail of Horizon Forbidden West’s gigantic robotic dinosaurs or the speed at which you can fast travel across the map when playing on a next-gen system. Ratchet and Clank: Rift Apart might have used the PS5’s speedy SSD for some impressive dimensional shifting, but Horizon Forbidden West feels like the first game to truly push the whole system to its potential.

That’s both exciting and a bit of a bother. For those of us that haven’t yet been able to grab a PS5, the game’s next-gen features are all but redundant, standing as a painful reminder of what we’re missing out on. If you’re like me, when you play a game, you’ll want to play it in the best state possible, with no shortcuts and no missing features. That means Horizon Forbidden West’s PS4 version doesn’t look too appealing, what with its graphical downgrade, slower loading times, and lower framerate.

So, what should you do? How can you get your Horizon fix while avoiding Forbidden West as you wait to get hold of a PS5? The answer is simple. Don’t turn to video games at all, but instead look to the tabletop in the Horizon Zero Dawn board game. 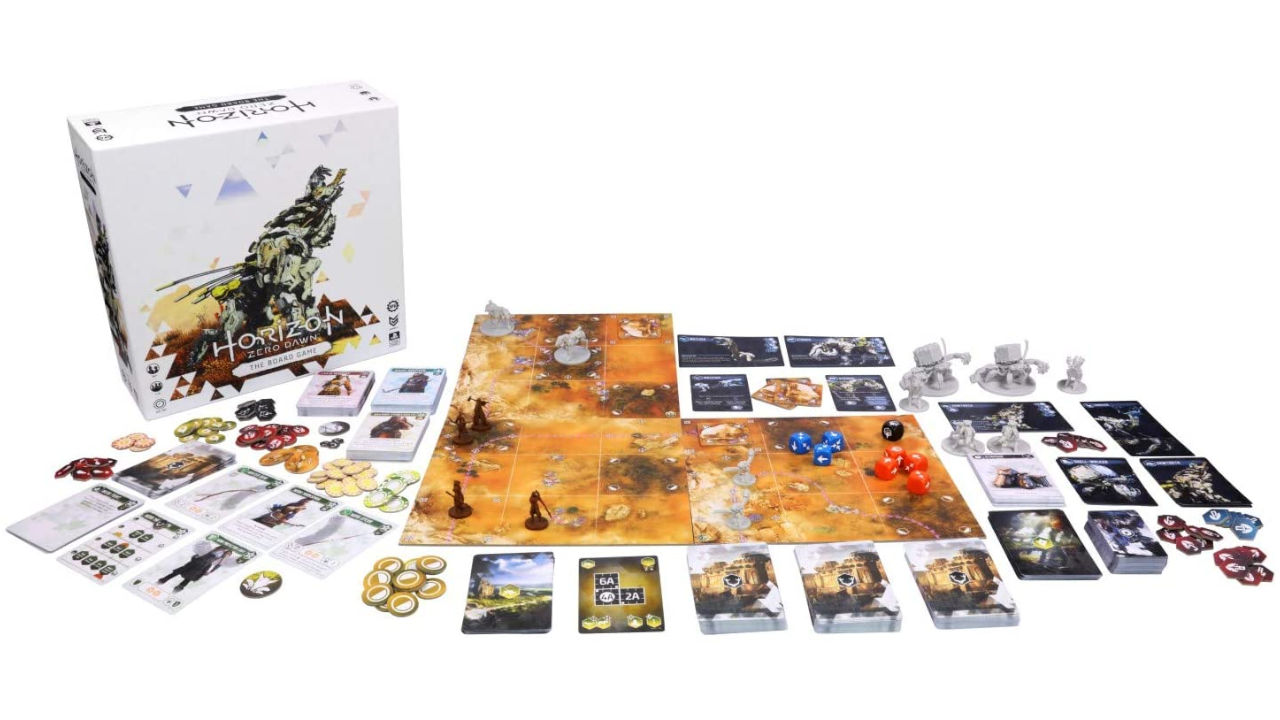 Kickstarted back in 2018 and released for retail last year, the Horizon Zero Dawn board game is one of many licensed titles under the wing of publisher Steamforged Games. A semi-co-operative, tactical miniatures game, it sets itself a high bar, trying to adapt the original game’s core combat loop into a tight 90-minute brawl that imitates the Hunters Lodge side quests from the original game.

The setup is simple. You and up to three buddies will take control of a band of aspiring hunters challenged to track a dino machine, follow its movements, and eventually wrestle it to the ground in a flurry of arrow volleys, slingshots, and spear attacks. Between missions you’ll be gaining new skills and learning abilities, as well as upgrading equipment in a process that’s reminiscent of the video game’s light RPG elements.

“Much like the original video game, fights naturally split into phases, as you sneak around enemies, plant traps, divert them into the most opportune position, before finally launching the attack.”

Each hunt plays out as a standalone encounter. You’ll randomly select a batch of robot beasties to stalk across a modular board, before using your character abilities to track, distract, and defeat your prey in a tough action economy. Much like the original video game, fights naturally split into phases, as you sneak around enemies, plant traps, divert them into the most opportune position, before finally launching the attack with the element of surprise firmly on your side. Whittle down the machines’ health down to zero, while protecting your character and compatriots, and hunt is yours.

Horizon Zero Dawn: The Board Game draws from its source material wonderfully. Machines follow patrol routes just as they do in the game, characters can hide in small grass to avoid alerting enemies, and attacks are directed at specific components of the machines, which can be torn off to disable their weaponry. You’ll broadly be working in tandem with your fellow hunters, but whoever lands the killing blow will earn a dollop of Glory Points to net additional rewards at the end of the mission. It adds a competitive edge to the hunt, letting you swoop into the action at the last second to claim the kill for yourself and backstab your buddies.

Make no mistake, the Horizon Zero Dawn board game doesn’t try to recreate the original video game wholesale. It’s not a sprawling adventure, it doesn’t follow a sweeping narrative, and it doesn’t even star Aloy (unless you bought the Kickstarter-exclusive version of the game that came with two extra Aloy character miniatures). Like all the best board game adaptations, it zooms into a specific feature of Guerrilla Games’ original, adapting that concept for the tabletop, rather than reverse-engineering the entire video game in what would undoubtedly be an ill-fated attempt.

However, while it might be focused, it’s not light. Its 50-page rulebooks speaks to the game’s weight, and while it might not be the most complex dungeon-crawler to release in the last few years, it’s certainly not family oriented. After playing a match, you’ll likely find it runs more smoothly, as you memorize the turn order and basic beats of each fight. But the enemy step, in which the opposing machines must be moved and activated in response to the players’ actions, can take a little longer to get used to. 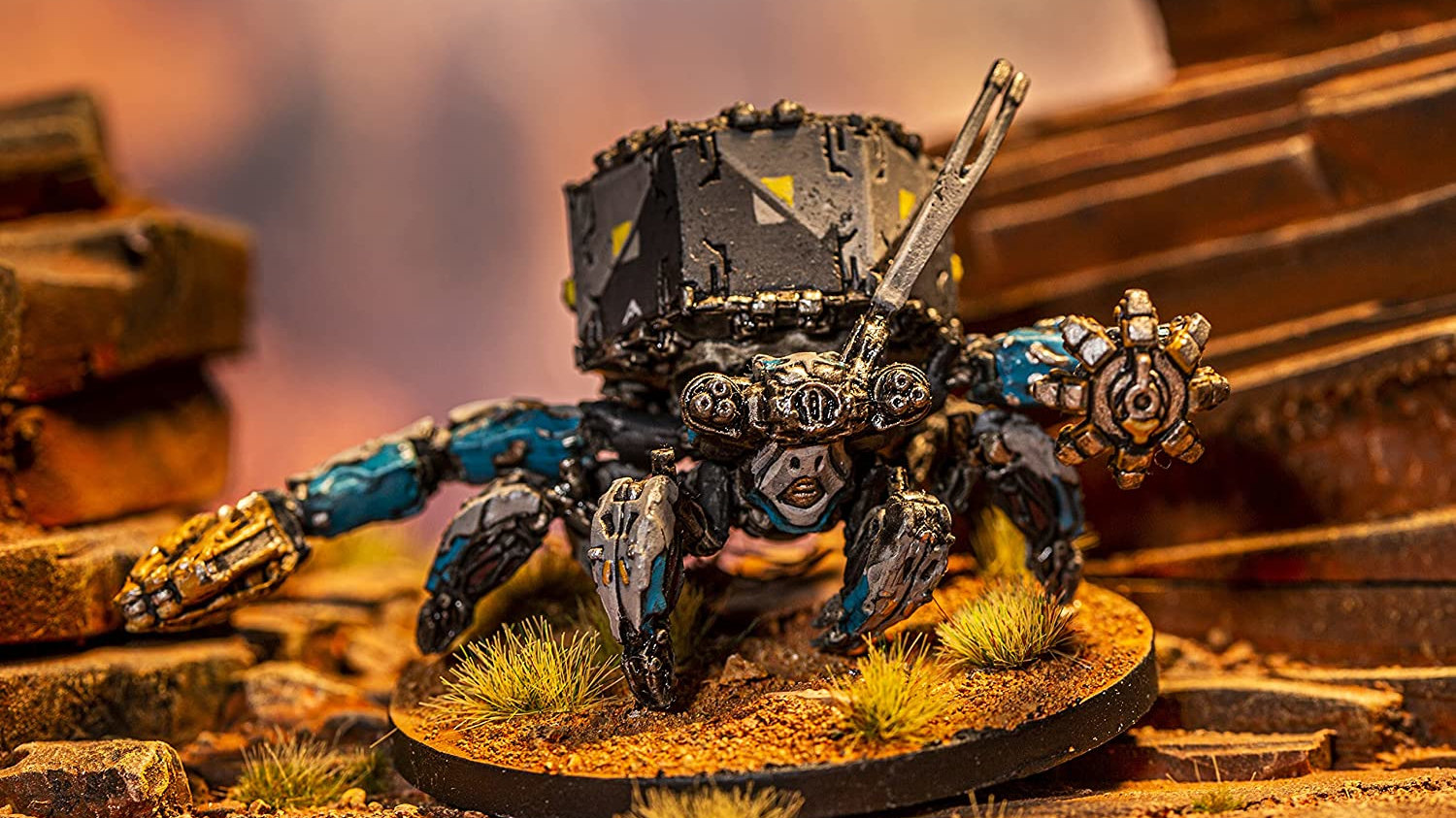 But this isn’t just a knockoff board game, it’s a licensed board game that was funded through Kickstarter in the last few years. That combination usually results in one thing for certain: the game will include a bunch of gorgeous plastic miniatures supposedly designed to heighten the immersion of the game, but really created to look incredibly pretty and convince potential Kickstarter backers to part with their cash.

“It’s made me more excited to dive back into Aloy’s apocalyptic world of machines, reminding me just how finely tuned the game’s stealth combat can be.”

It’s a solid business model, and one that’s surely worked here. The miniatures included in the Horizon Zero Dawn board game are glorious, recreating the video game’s towering robo machines in brilliant, plasticky detail. The base game includes several Watchers, Grazers, Striders, Scrappers, a couple of Shell-Walkers, and two Sawtooths as endgame enemies, and  which all make for lovely desk display models, besides their function as game components.

Of course, if you’re after a specific machine, you’re going to have to shell out quite a bit extra. An expansion pack containing a Behemoth, a couple of Tramplers, and a few Broadheads will set you back $54.95 / £54.99 / about $AU 76.50, so don’t go expecting to collect the whole Horizon range. But maybe you think spending $59.95 / £54.99 / about $AU83.40 for a single, massive Thunderjaw to sit on your desk is worth it just for the odd looks your coworkers will give you. 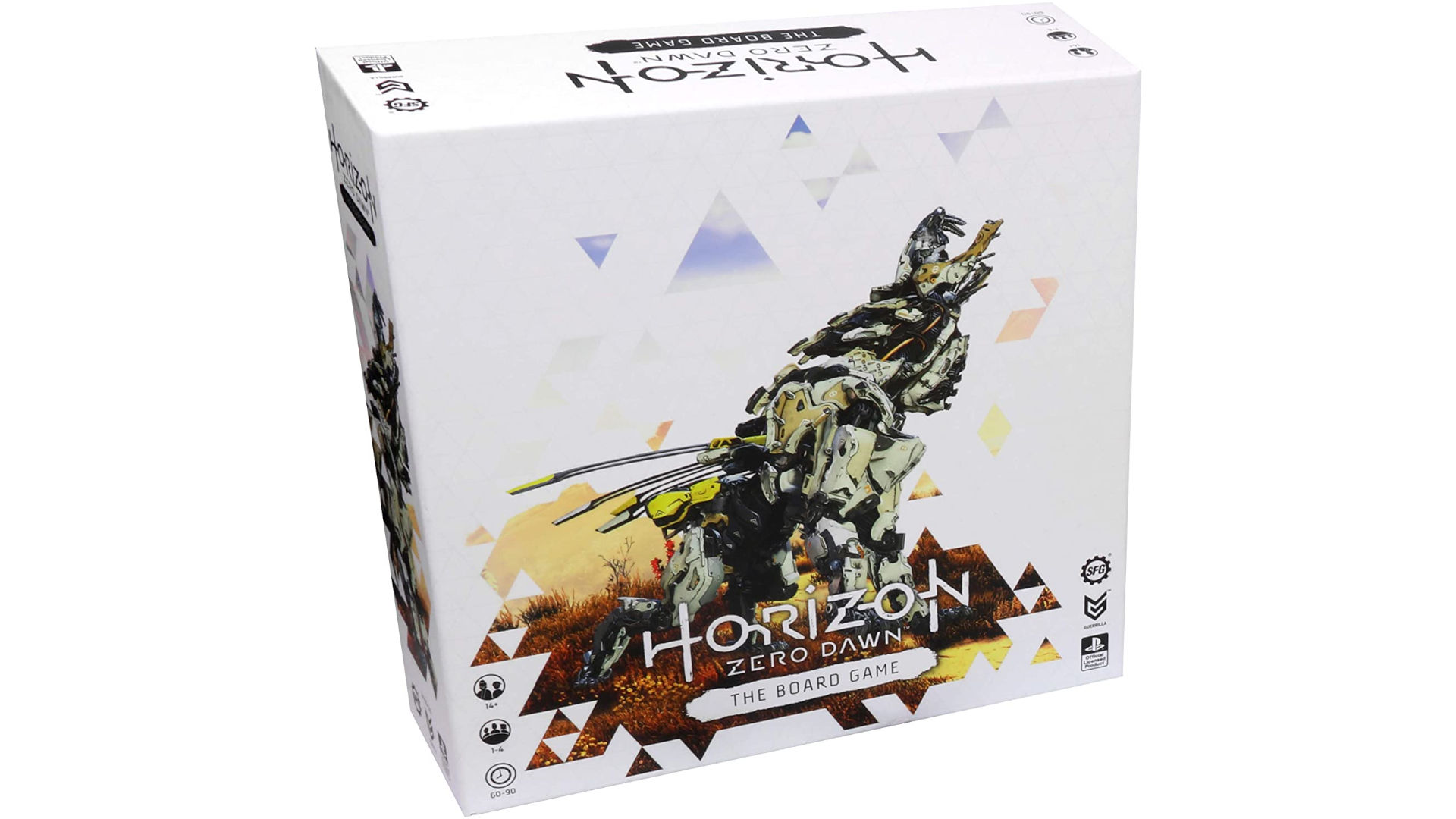 Would I rather play Horizon Forbidden West? Well, yes, but only because I’ve already spent some time with the Horizon Zero Dawn board game. Its setup time might not beat the PS5’s load speeds, and its miniatures might not boast the same graphical fidelity as the game’s character models, but it does a remarkably good job of recreating the core Horizon experience on the tabletop.

If nothing else, it’s made me more excited to dive back into Aloy’s apocalyptic world of machines, reminding me just how finely tuned the game’s stealth combat can be. Give it a go while you wait for a PS5 to land in your lap, and you’ll probably come away even more keen to try Forbidden West.

Xiaomi itself has disproven that last-minute Xiaomi 12 specs leak

Spotify’s doubling down on its Clubhouse-style live audio feature