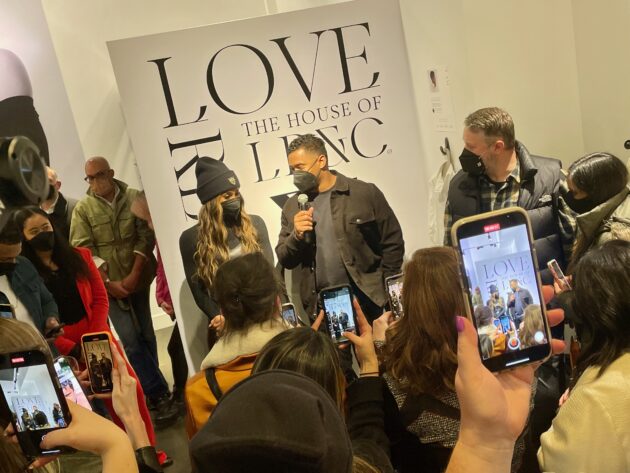 Russell Wilson and Ciara address a crowd of partying shoppers at their new clothing store in Seattle, The House of LR&C, on Tuesday night at University Village. (GeekWire Photo / Kurt Schlosser)

Seattle Seahawks quarterback Russell Wilson and music superstar Ciara took it to the “House” on Tuesday night — The House of LR&C, actually — as they partied to celebrate the opening of their first fashion store.

True to form, Wilson couldn’t help but drop some football analogies as he thanked the team that helped build the new company and the supporters who ventured to the University Village shopping mall to toast its success.

“Just to be here with you all is an exciting day for us,” Wilson said. “To be able to hop out of the car and walk about 50 yards — I know my down and distances — and throw a deep out-route to this amazing facility. To know that we have a store here, it’s such a blessing.” 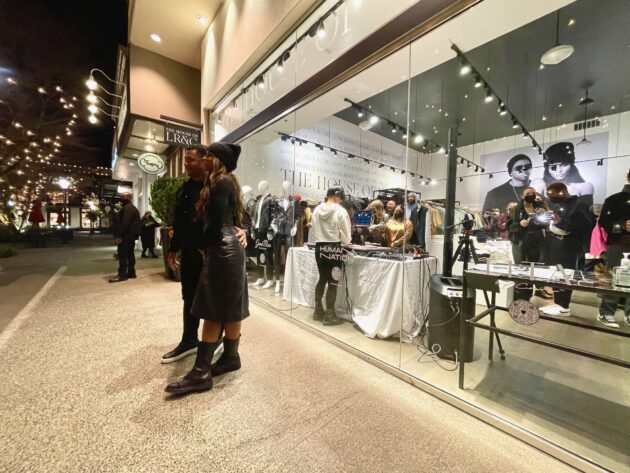 Wilson also passed to his wife and entrepreneurial partner, as the two toasted their effort to build something that would promote sustainability and give back to causes that the two of them have championed, including their Why Not You Foundation, a Seattle nonprofit dedicated to education, children’s health and fighting poverty. The new store gives 3% of net revenue back to Why Not You.

“This is bigger than fashion,” Ciara said. “It’s not just about that tangible part of it, it really is about that long lasting impact.”

The House of LR&C — which stands for Love, Respect & Care — launched in 2020 and the first brick-and-mortar location serves as a home to several of the couple’s fashion brands, including Good Man Brand (menswear); Human Nation (gender inclusive streetwear); LITA by Ciara (contemporary women’s brand); and Wilson’s 3Brand (kids apparel).

The store opened earlier this month and features retail-tech touches that have become popular as more brands bridge the gap between what in-store and e-commerce shoppers expect. The store is heavy on the use of Flowcodes, a type of QR code designed to optimize customer engagement, taking shoppers on their smartphones to everything from size charts to fashion videos to in-store augmented reality experiences. 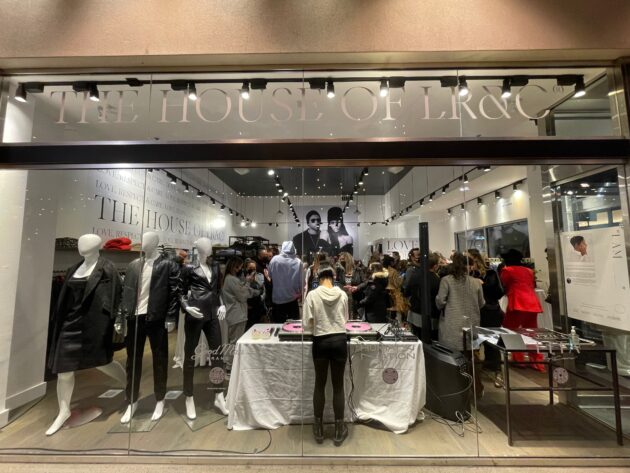 A DJ spins tunes in the front window of The House of LR&C during a private party for the opening of the store. (GeekWire Photo / Kurt Schlosser) 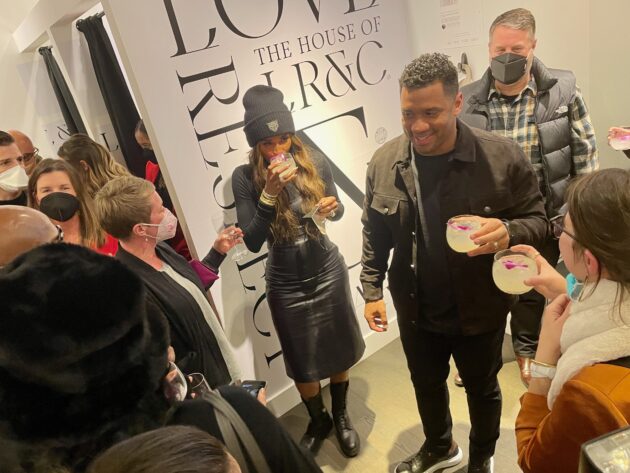 On Tuesday night, shoppers bopped around the store and sipped champagne and cocktails as a DJ spun tunes near the front windows. Most of those shoppers had their smartphones out, to scan Flowcodes on merchandise or near displays — or to snap images and selfies with Wilson and Ciara.

Wilson’s own team of multimedia professionals from his Seattle brand management and production company West2East Empire also moved around the store shooting video and posting quickly to social feeds. That team includes Josh Cashman, the sports geek who caught Wilson’s attention three years ago with his quirky videos on Twitter and landed himself a job making content for West2East.

The House of LR&C is one of several business ventures for Wilson and Ciara. The company is raising up to $15 million to fuel growth and its revenue has grown by around 70% over the past year and is now at eight figures.

Keep scrolling for more photos from the store opening party: 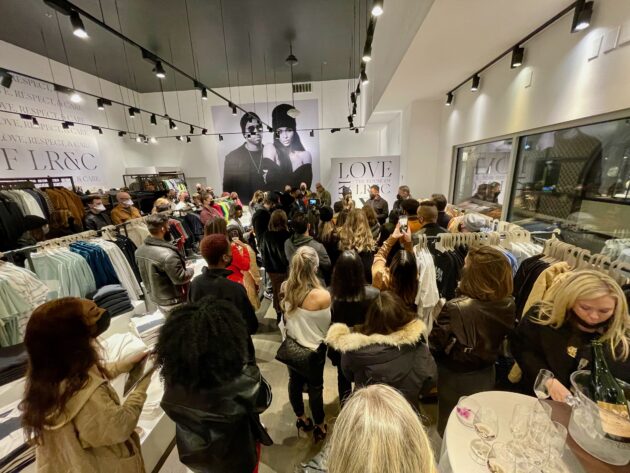 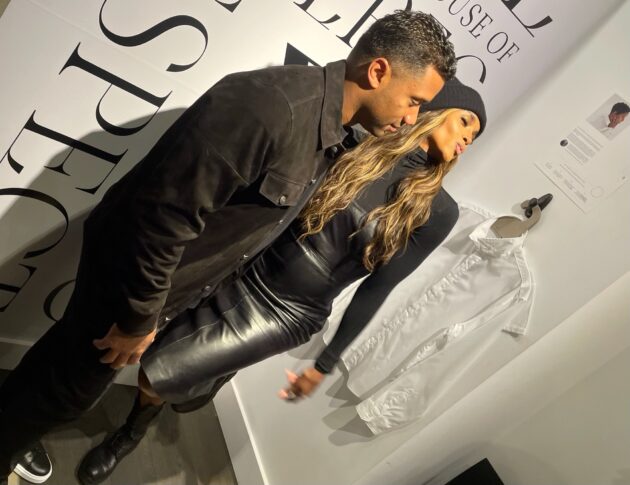 Russell Wilson and Ciara — dressed in their own fashions — pose for pictures. (GeekWire Photo / Kurt Schlosser) 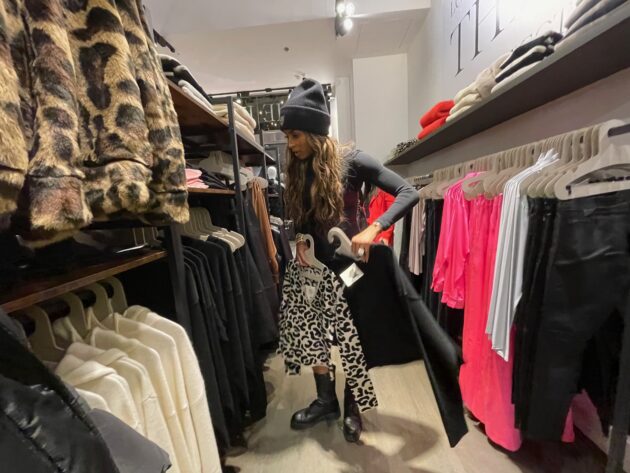 Ciara grabs items from her own LITA line at The House of LR&C. (GeekWire Photo / Kurt Schlosser) 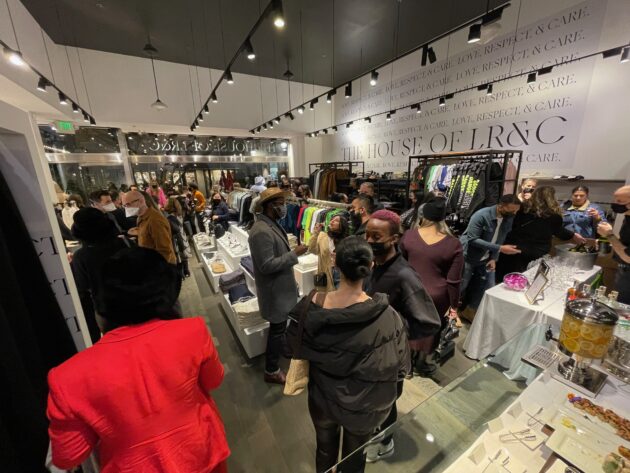 The party scene in the store. (GeekWire Photo / Kurt Schlosser) 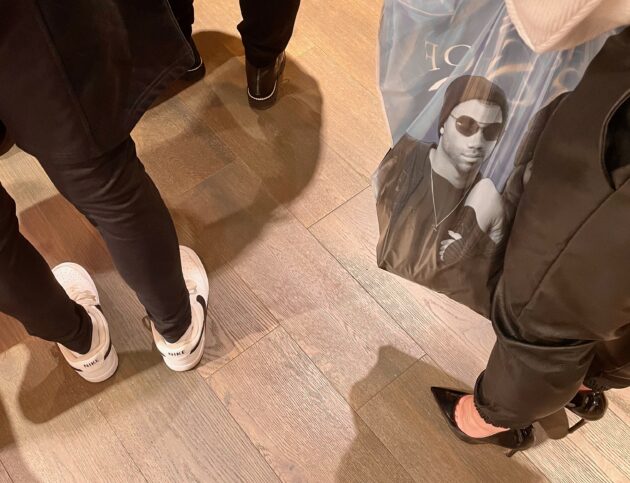