It could well be your university or your pension fund

THE FIRST law of thermodynamics states that energy cannot be created or destroyed, just transferred from one place to another. The same seems to apply to the energy industry itself. Pressed by investors, activists and governments, the West’s six biggest oil companies have shed $44bn of mostly fossil-fuel assets since the start of 2018. The industry is eyeing total disposals worth $128bn in the coming years, says Wood Mackenzie, a consultancy. Last month ExxonMobil said it would divest its Canadian shale business; Shell put its remaining Nigerian oilfields on the block. But much of the time these outmoded units are not being closed down. Instead they are moving from the floodlit world of listed markets to shadier surroundings. 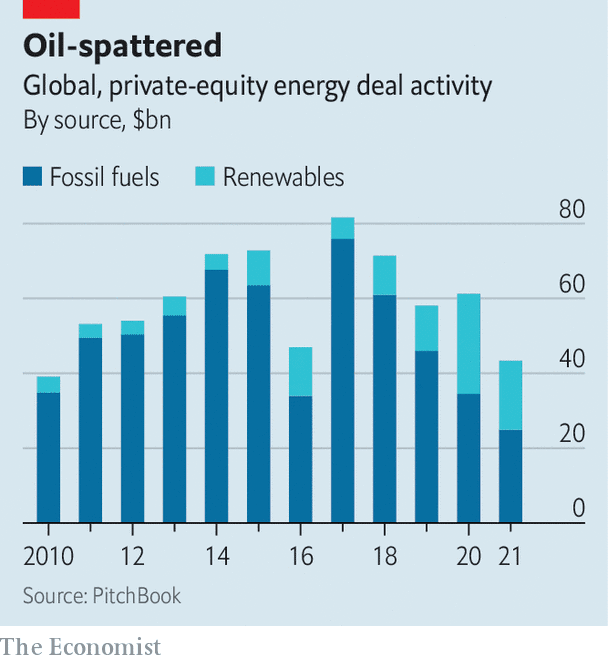 Many are ending up in the hands of private-equity (PE) firms. In the past two years alone these bought $60bn-worth of oil, gas and coal assets, through 500 transactions—a third more than they invested in renewables (see chart). Some have been multibillion-dollar deals, with giants such as Blackstone, Carlyle and KKR carving out huge oilfields, coal-fired power plants or gas grids from energy groups, miners and utilities. Many other deals, sealed by smaller rivals, get little publicity. This sits uncomfortably with the credo of many pension funds, universities and other investors in private funds, 1,485 of which, representing $39trn in assets, have pledged to divest fossil fuels. But few seem ready to leave juicy returns on the table.

PE’s love affair with oil is not new. Between 2002 and 2015, rising global demand for the fuel pushed its price above $100 a barrel, prompting funds focused on “upstream” assets—exploration and production, especially fracking wells—to mushroom. But then Saudi Arabia and its allies, eager to crush American shale, flooded the market, causing drilling firms to go bust and deals to sour. Buyout funds targeting fossil fuels posted ten-year internal rates of return (IRRs) of -0.7% at the end of June 2021, reckons Preqin, a data firm.

But the wind has shifted. As demand for oil and gas persists while dwindling investment in production limits supply, prices are rising again. Shell predicts IRRs of 20% for investments in upstream projects, against 10% for renewable ones. Buyout funds, which often have a ten-year life, can hope to make their money back in half the time, most of it from the operating cash flows the acquisitions generate rather than from reselling assets. They can source capital cheaply: in contrast to the majors, which have an annual cost of equity of about 10%, they typically finance energy deals with 80% debt, at interest rates of 4-5%. And discounts imposed on “brown” assets by the stockmarket, linked to sustainability factors rather than financial ones, are causing a lot of mispricing on which private funds thrive.

PE managers have also been canny in changing their strategies. Many are no longer marketing energy funds except those with a focus on renewables. Instead, upstream assets are being lumped with others into funds labelled “growth” or “opportunistic”, which cover a range of industries. Private-debt funds snap up oil and gas loans from banks. The biggest shift has been a swoop on “midstream” assets (chiefly pipelines) by private-infrastructure funds. Because their revenues are contracted and paid for by big clients—energy majors and utilities—they are deemed very safe, and also generate attractive IRRs in the high teens. Some firms do everything. In June a fund manager owned by Brookfield, which is based in Canada, acquired joint ownership of the entire portfolio of North American oil and gas loans of ABN AMRO, a Dutch bank. In July Brookfield agreed to pay $6.8bn for Canada’s fourth-largest pipeline company—a day after touting a $7bn fundraising round for a green “transition” fund.

PE firms say they can be trusted to manage those assets well. Because they own controlling stakes and escape the constant gaze of public markets, they see themselves as being in a unique position to improve efficiency and reduce emissions. But the incentives to pocket dividends first and worry about the rest later are growing. Global private-capital “dry powder”—money raised by funds that has yet to be spent—has hit a $3.3trn record. With so much to spend, managers want to do a lot of deals, which in turn means many don’t have time to craft considered decarbonisation plans for assets.

Investors seem in no rush to tighten the taps. A recent survey by Probitas Partners, which helps private firms raise funding vehicles, shows investors have almost no appetite for oil funds today. But few have policies that exclude case-by-case transactions by broader funds. Using data from PEI Media, The Economist has looked at eight PE firms that have closed fossil-fuel deals in the past two years. The investors in some of their latest energy-flavoured vehicles include 53 pension funds, 23 universities and 32 foundations. Many are from America, such as Teacher Retirement System of Texas, University of San Francisco and the Pritzker Traubert Foundation, but that is partly because more institutions based there disclose PE commitments. The list also features Britain’s West Yorkshire Pension Fund and China Life.

Over time, some investors may decide to opt out of funding their portion of fossil-fuel deals. But a third, yet more opaque class stands ready to step in: state-owned firms and sovereign funds operating in the shadows. Last month Saudi Aramco, the Kingdom’s national oil company, acquired a 30% stake in a refinery in Poland, and Somoil, an Angolan group, bought offshore oil assets from France’s Total. In 2020 Singapore’s GIC was part of the group that paid $10bn for a stake in an Emirati gas pipeline.

Could banks act as a restraining force? Big lenders in Europe are soon to face “green” stress tests; many have announced net-zero targets. Their appetite for upstream deals is “diminishing rapidly”, says a Wall Street banker. Yet for big deals, bond markets remain open. Smaller deals can tap private-debt markets. And although Western banks shun loans to midstream projects, Asian ones do not. Liquidity still abounds. Last month a group of investors led by EIG, an American buyout firm, hired Citigroup and JPMorgan Chase to help it refinance the $11bn loan it took in June to buy Saudi pipelines. No matter how deep you dig into the capital structure, the laws of thermodynamics still seem to apply.

The promise of former eastern-bloc economies is mostly unfulfilled

The promise of former eastern-bloc economies is mostly unfulfilled

Azure may have finally toppled AWS in the global cloud battle

The Margin: ‘There’s no reason to test if you have no symptoms,’ and 2 other findings from the woman instrumental in first identifying omicron

What’s Worth Streaming: What will streaming services bring in 2022? Here are 5 trends to watch