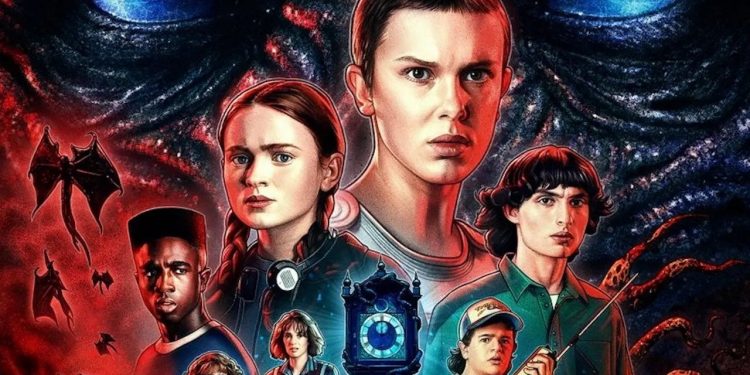 As much as we’d like to harp on about the rest of this week’s offerings – which include Chris Pratt’s new Prime Video action series, The Terminal List, and a second season of top-draw Hulu comedy Only Murders in the Building – we’re fairly sure that the closing chapter to the penultimate season of arguably the best Netflix show around is the arrival set to drum up the most excitement among subscribers.

Still, it doesn’t have to be a Stranger Things-exclusive weekend, and below, we’ve rounded up seven of the biggest new movies and TV shows available to stream on the likes of Netflix, Prime Video, HBO Max and more over the next few days.

Let’s kick off with the big one, shall we? The final two episodes of Stranger Things’ long-awaited fourth season are now available to stream on Netflix.

Without wishing to stray into spoiler territory, we were mightily impressed with volume 1 of Stranger Things season 4, describing it, in our review, as “an absorbing, action-packed and horror-fuelled entry” in the series. Episode 7’s cliffhanger ending did, however, leave us with 11 questions that we hope volume 2 will answer, and we’re excited to rejoin the beloved Hawkins gang on their quest to defeat mysterious baddie Vecna.

We know that the Duffer brothers’ mega-popular Netflix series will be returning again for a fifth and final season – but that doesn’t mean every fan-favorite Stranger Things character will make it out of these two new episodes unscathed. Brace yourselves: it could get ugly (and not just because the season finale is two-and-a-half-hours long).

After joining forces for noisy blockbuster The Tomorrow War, Chris Pratt and Prime Video continue their working relationship with The Terminal List, which is now streaming on Amazon’s platform in its entirety.

This eight-episode thriller series, based on the novel of the same name by Jack Carr, charts the exploits of James Reece (Pratt), a hardened Navy SEAL operative who, after surviving a deadly ambush on his platoon, becomes hell-bent on uncovering the ugly truth behind the unexpected attack.

Reviews for The Terminal List have been decidedly mixed so far, but most critics have labeled the series an enjoyable, action-packed adventure – “your Dad’s new favorite show” seems to be the general consensus, which is something of a back-handed compliment.

Only Murders in the Building season 2 (Hulu, Disney Plus Star)

One of the best new shows of 2021, Only Murders in the Building returns for a much-deserved follow-up season this weekend on Hulu in the US and Disney Plus Star in the UK.

Critics have praised Only Murders in the Building’s new episodes for being bigger, bolder and smarter than their predecessors – so the show’s returning fans should find plenty of hapless hijinks to enjoy here.

Now available to stream on Hulu in the US and Disney Plus Star in the UK.

It was only a matter of time before Baymax, one of Disney’s most lovable and underrated animated characters, bagged themselves a standalone series on Disney Plus – and so it has come to pass with the imaginatively-named Baymax! (exclamation point included).

The Big Hero 6 star is the focus of six short episodes (the longest is just 10 minutes) in this easy-to-watch family show, which follows the misadventures of the titular doctor-bot as he waddles through San Fransokyo in search of those in need of medical assistance.

Scott Adsit returns as the voice of Baymax, with Maya Rudolph, Ryan Potter, Jaboukie Young-White and Emily Kuroda also lending their talents to new and existing characters. If you’re looking for a lighthearted laugh this weekend, this is the series for you.

Now available to stream on Disney Plus.

Regina Y. Hicks and Wanda Sykes’ hit Netflix comedy, The Upshaws, returns for the first half of its second season this weekend.

Sykes herself reprises her role as the foul-mouthed Lucretia alongside series mainstays Mike Epps and Kim Fields in this explicit sitcom, which centers on a working class family that struggles to navigate the ups and downs of everyday life in Indiana.

As is typical of Netflix shows, all eight episodes of The Upshaws season 2 part 1 are available to stream in one fell swoop right now, with the season’s second half expected to drop later this year.

Marvel Studios Assembled: The Making of Doctor Strange in the Multiverse of Madness (Disney Plus)

Having arrived on Disney Plus last month, Doctor Strange in the Multiverse of Madness gets Marvel’s Assembled treatment this weekend.

Thanks to a customary cocktail of talking heads and unseen footage, this behind-the-scenes documentary feature lifts the lid on the technical wizardry involved in bringing the Sorcerer Supreme’s actual wizardy to life in the recent MCU Phase 4 movie.

If you’ve seen any of the previous Marvel Studios Assembled films, you’ll know what to expect from this one – but we imagine it’ll still be cool to see how Benedict Cumberbatch is transformed from English thespian into lunchbox hero.

Now available to stream on Disney Plus.

If you’re into your harrowing-but-fascinating historical documentaries, then Chernobyl: The Lost Tapes is for you.

If you thought the Emmy Award-winning show was a tough watch, Chernobyl: The Lost Tapes will open your eyes to the true horrors of the generation-defining accident. This documentary was released at the end of last week, and is now available to stream via HBO Max in the US and Sky and Now TV in the UK.

Now available to stream on HBO Max in the US and Sky and Now TV in the UK.

: One country topped GoFundMe’s 2021 list of most generous nations for the third year in a row — and it’s not the U.S.