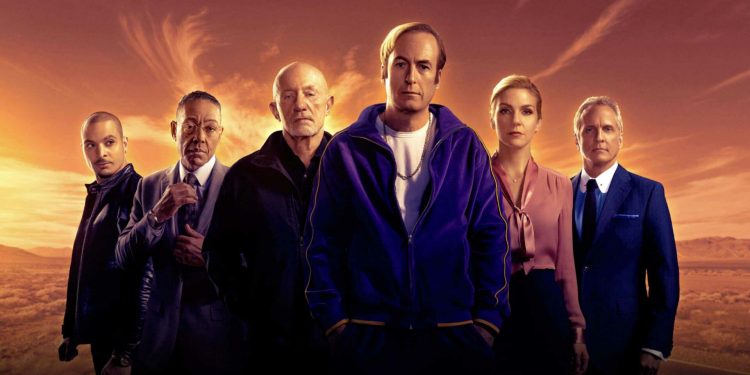 Suffice to say, last week’s understated streaming arrivals provided a refreshing break from the onslaught of blockbuster television (think Stranger Things, Obi-Wan Kenobi and The Boys) we’ve enjoyed of late – and while normal service hasn’t quite resumed this weekend, there are definitely a few more big-name titles in the mix as we move through July.

The most noteworthy of this week’s entertainment picks is the return of Better Call Saul season 6 on AMC Plus and Netflix, whose final few episodes are joined by a new season of Hulu’s What We Do in the Shadows and a handful of feature-length productions, like Don’t Make Me Go on Prime Video.

Below, we’ve rounded up seven new movies and TV shows available to stream on the likes of Netflix, Prime Video and HBO Max over the next few days.

The second half of Better Call Saul’s sixth and final season has begun streaming on Netflix (unless you’re in the US, in which case you’ll find it on AMC Plus), giving fans one last opportunity to bask in the slippery genius of Bob Odenkirk’s morally-corrupt defense attorney, Saul Goodman.

Season 6 part 2 finds the titular character reeling from the events of part 1’s gripping finale (no spoilers here!), as the show itself continues its descent into Breaking Bad territory. We already know that both Walter White (Bryan Cranston) and Jesse Pinkman (Aaron Paul) are set to appear in Better Call Saul’s upcoming episodes, but showrunners have promised fans that “whatever happens next, it’s not gonna go down the way you think it is.” Ominous.

Episode 8 of Better Call Saul season 6 is streaming now on AMC Plus and Netflix, with the remaining five entries scheduled to land weekly every Monday (or Tuesday, depending on your region) through August 16.

Now available to stream on AMC Plus in the US and Netflix in the UK.

Set in the year 2036, this eight-part show – imaginatively named Resident Evil – follows a troubled young woman, Jade Wesker (Ella Balinska), as she fights to survive in a post-apocalyptic world overrun by infected creatures. Lance Reddick (The Wire) also stars as Dr Albert Wesker, Jade’s father and head honcho at the Umbrella Corporation, otherwise known as the most powerful organization left on Earth.

If you’ve ever played a Resident Evil game or watched one of the franchise’s myriad movie adaptations, you’ll know what to expect from this one – critics have described it as “eight hours of mindless, blood-soaked zombie fun,” which is (probably) a compliment.

Nathan Fielder’s Comedy Central series, Nathan for You, grew into something of a cult classic following its relatively quiet premiere in 2013, and now the titular funnyman returns to the screen with six-part docuseries The Rehearsal.

More of an extended social experiment than a bona fide comedy show, the series follows Fielder as he attempts to help ordinary people rehearse a major life moment by building a simulation of reality around them. It’s essentially The Truman Show, but those involved have volunteered to take part in the illusion with the hope of perfecting an equivalent event in real life.

Sure, that all sounds totally ridiculous and not particularly entertaining, but The Rehearsal has been near-universally praised for being “uncomfortably funny, sneakily poignant and conceptually bananas.” The series isn’t yet streaming in the UK, though we’d expect it to debut on Sky and Now TV in the not-too-distant future.

Everyone loves a good Jane Austen novel adaptation, and Netflix has decided to throw its hat in the ring this weekend with Carrie Cracknell’s Persuasion.

Unfortunately, Netflix’s latest attempt at period drama has been lambasted by critics. “Persuasion is an all-time disaster,” wrote one reviewer, while another proclaimed that “everyone involved should be in prison.” Ouch. Still, it might be a laugh to see just how bad it is?

Road movie (and tear-jerker) fans, this one’s for you.

Now streaming on Prime Video, Don’t Make Me Go stars John Cho (Cowboy Bebop) as a terminally ill father who decides to use the little time he has left to bond with his teenage daughter (Mia Isaac) on a cross-country trip from California to New Orleans.

Granted, that synopsis doesn’t sound particularly uplifting, but the movie – directed by Hannah Marks and produced by Amazon Studios – has been described by critics as “heartbreaking and heartening in equal measure.” Just make sure you’ve got some tissues on hand if you decide to watch this one.

What We Do in the Shadows season 4 (Hulu)

Jemaine Clement’s beloved mockumentary comedy horror series (which is based on the 2014 film of the same name) returns this weekend for its fourth season, continuing the misadventures of several flat-sharing vampires in Staten Island.

New episodes of What We Do in the Shadows will air on FX every Tuesday – the first two are available to stream now – before dropping on Hulu the following day. UK viewers, fear not: we expect this one to land on BBC iPlayer sometime soon.

Now available to stream on Hulu in the US.

James May: Our Man in Italy (Prime Video)

In light of the success of Clarkson’s Farm (a second season of which is on the way soon), another member of The Grand Tour’s popular presenting trio, James May, heads up his own Prime Video series this weekend.

Across six episodes, James May: Our Man in Italy follows the British presenter as he explores the ins and outs of the titular European country. “There’ll be plenty of cheese, culture, cars, beautiful countryside and more,” according to Amazon, along with – we suspect – plenty of hapless hijinks.

Critics have labeled the series “an amiable food and wine-filled meander at Amazon’s expense”– and given the surprisingly wholesome nature of Clarkson’s Farm, we’re inclined to recommend this one to anyone in need of an easy watch this weekend.

Millions of WordPress sites are being scanned for potential attacks

What’s Worth Streaming: What will streaming services bring in 2022? Here are 5 trends to watch