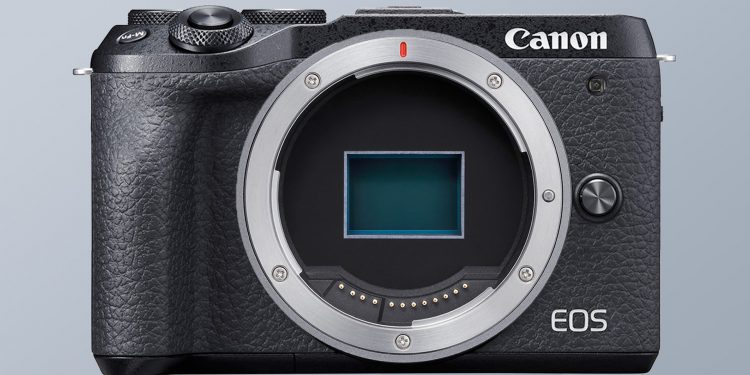 Canon has only just announced the new Canon EOS R7 and EOS R10, its first two RF-S mount cameras with APS-C sensors. But rumors are already swirling that a Canon EOS R100 model is en route with an even lower price tag than the EOS R10. And in these trying financial times, that could be very good news indeed for hobbyist photographers.

According to the latest rumors, the EOS R100 will sit below the EOS R10 and become a new entry-point for buyers who want an affordable mirrorless camera. In theory, it could be like a Canon EOS M50 Mark II, but using RF family lenses rather than the now less exciting EF-M type.

The RF series of lenses was initially made for full-frame cameras, but more recent RF-S lenses have now been made specifically for those with APS-C sensors. Rumors suggest that more of these RF-S lenses are en route, which would be good news for the EOS R100.

The Japanese website Asobinet predicts the camera will arrive in the first half of 2023. While the site describes its source as “unreliable”, the usually reliable Canon Rumors says “we do think a camera body under the Canon EOS R10 is very likely”. We’ve combined the latest speculation with our thoughts on what we’d like to see from what’s expected to be Canon’s cheapest RF-mount camera.

It seems feasible that the Canon EOS R100 could cost a similar amount with a kit lens (like the new RF-S 18-45mm F4.5-6.3 IS STM below), or have a body-only price of a couple of hundreds dollars less.

Some suggest it could be as low as $599, matching the current EOS M50 Mark II. That’s a best-case scenario, though, and we would not be too surprised if the new model is a little more expensive.

The Canon EOS R100’s job is to modernize the EOS M50 Mark II a little, to solve a few of its glaring video weaknesses, and offer more casual photographers a lens system that doesn’t feel like a dead end. Here’s what we hope to see from the camera.

There are two obvious routes that the Canon EOS R100 could take, and both have been mirrored by a pair of Sony’s affordable cameras.

Like the Sony A6100, Canon could produce a camera with all the usual bits of hardware, like an electronic viewfinder, but incorporate lower-end specs. Or it could strip the thing back more comprehensively in order to appeal specifically to content creators on a budget – like the Sony EV-Z10.

The latter would be arguably be more interesting. But the Canon EOS R100 name strongly suggests it will be more of a classic all-rounder APS-C camera like the Canon EOS M6 Mark II.

Lower-cost, pro-style cameras are usually smaller and lighter than more expensive ones, but the ways to trim down the design from the EOS R10’s mold are not immediately obvious. That camera does not have any official water or dust proofing, it does not use a bulk-adding IBIS system, and it weighs an approachable 429g with battery and SD card. That certainly isn’t heavy. The large RF-S lens mount won’t help either – the body can only get so small.

However, Canon could trim down the grip and potentially use a slot-in EVF like the Canon EOS M6 Mark II. This would eliminate the lump on the top of the other R-series models. And bundles with and without the EVF would let Canon further reduce the entry price – although you can bet you’ll pay over the odds if you decide to buy it afterwards.

Using a lower-quality shell would also help lower weight and reduce costs slightly. We complained about the EOS M6 Mark II’s build quality in our review, but if that’s required to get the Canon EOS R100 to the right price, the sacrifice could be worth it.

Canon may also choose to simplify the controls a little, perhaps removing the Canon EOS R10’s dial by the shutter button – because if the design is as compact as we hope, there will be little room in the hand grip for it.

The best argument for a removable, optional, viewfinder in the EOS R100 is that the EOS R10 has just about the lowest quality level that provides a good experience. It has a 2.36-million dot EVF, equivalent to 1024 x 768 pixels.

A 1.44-million dot EVF is the step below, which amounts to 800 x 600 pixels. While the Sony A6100 uses an EVF of that resolution, that camera was released in 2019 — four years before the expected R100 release. Times change and expectations rise.

Cameras like the Sony A6100 (above) place the viewfinder in the top-left hand corner, to reduce the camera’s height and offer a rangefinder-style look. (Image credit: Sony)

An ideal outcome for the Canon EOS R100, however, might be a rangefinder-style EVF placement, where it sits to one side of the camera, rather than at its centre.

This would give the camera the sleeker shape of the EOS M6 Mark II, without getting rid of the EVF altogether or demoting it to an awkward  ‘optional extra’ that sits in the hotshoe. However, this is not a typical Canon style and raises the question of whether there’d be room to fit it into the camera, when available body space is already reduced by the larger RF lens mount.

We initially thought the cost might be prohibitive too – a 2.39M-dot EVF at $599? But then we remembered the EOS M50 Mark II has that very resolution at the same price. The necessary cut here will be magnification, meaning the EVF’s image is going to look relatively small compared to that of a higher-end camera.

The Canon EOS R100 is likely to use the same sensor as the EOS R10, a 24MP APS-C size chip. As such it will take stills of comparable quality to that camera.

This also means the camera will have a very similar autofocus system, as the AF points are right there on the sensor. Canon calls this AF system Dual Pixel CMOS AF II. The Canon EOS R10 has 651 points when using standard autofocus, or 4,503 when manually selecting single-point AF positions.

Considering the Canon EOS R100 is also likely to have the Digic X processor, there’s little reason for it to lack the eye, face, body, vehicle and animal tracking of the EOS R10.

Of course, Canon could choose to leave out some of the secondary object recognition modes in order to create a clearer delineation between the R10 and R100.

4. Performance and buffer: is 14fps realistic?

The one current suggestion about the Canon EOD R100’s performance, as per the leaks published by Asobinet, is that it will shoot at up to 14fps. This would be far faster than the 8fps of the FujiFilm X-T200, and noticeably quicker than the 11fps Sony A6100.

Still, those speeds are a little slower than the 15fps (mechanical shutter) and 23fps (electronic shutter) speeds of the Canon EOS R10 – so not entirely unrealistic.

You are also unlikely to be able to shoot for too long before filling the Canon EOS R100’s buffer, after which the camera slows to a crawl as it flushes out the data.

You’ll likely be able to shoot for a couple of seconds maximum when shooting raw files, or a handful when capturing JPEGs, but that should still be enough to snag some in-focus shots of the family dog.

An Asobinet leak suggests the Canon R100 will be able to shoot 4K video at 30 frames per second, but not 60fps.

This would match APS-C competitors around the same price. The FujiFilm X-T200 is limited to 4K/30p, while the video-focused Sony ZV-EV10 can only shoot at 24p and 30p. At some point, entry-level APS-C cameras will start to offer 4K/60p, but the Canon EOS R100 seems unlikely to be the camera to make that leap.

What we want to see is 4K/30p and 4K/24p without a crop, meaning the footage is oversampled from 6K’s worth of data. There should also be solid electronic/software stabilization for those looking to casually shoot video at 1080/60p.

We also want to be able to use PDAF (phase-detect) autofocus at 4K. As much as anything else, this is about consistency of experience. The user shouldn’t have to spend time wondering why AF performance suddenly gets so much worse when you start shooting 4K video.

The Canon EOS R100 is not, however, going to be a camera laser-focused on content creators. Canon’s step-up EOS R10 model lacks a flat Log shooting mode, so the R100 is also unlikely to have one. And it may lack that camera’s HDR PQ mode, which shoots in YCbCr4:2:2 10-bit color.

However, much of the intended audience for the R100 is going to de dumbfounded by terms like Log and 4:2:2. Its job is to be easy to use and affordable, and by elevating video capabilities above those of the EOS M50 Mark II, Canon should be able to make the EOS R100 a compelling option for those who want mirrorless on a budget.

: Vita Coco partners with Diageo amid growing competition in the canned cocktail category

: Vita Coco partners with Diageo amid growing competition in the canned cocktail category

In One Chart: What happens when the S&P 500 climbs more than 25% in a year? This chart shows midteen gains usually follow.