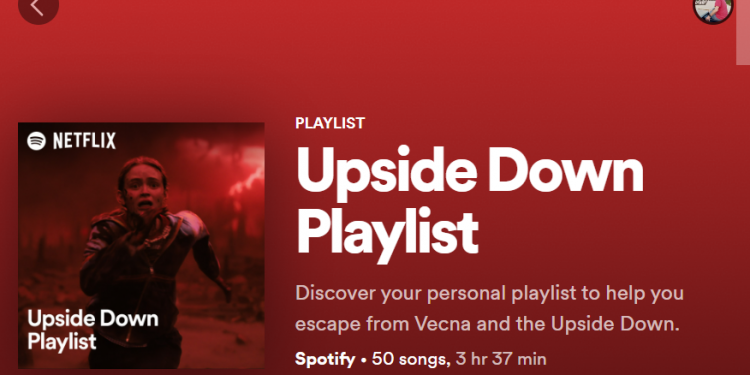 With Stranger Things Season 4, volume 2 landing on Netflix today, it might be a good idea to figure out your own personal “saviour song,” the one that will deliver you from the clutches of Vecna. Spotify can help with that.

To backtrack a bit – to Stranger Things Season 4, volume 1, specifically – in episode 4 the gang discovers that music can supercharge Max, allowing her to break free from the clutches of Vecna and escape the Upside Down. The song that makes this happen is Kate Bush’s ‘Running Up That Hill (A Deal with God)’, a track that charted in the Billboard Top 100 upon its initial release in 1985, but has since climbed to the number 1 spot in the UK and number 4 in the US upon the airing of that episode of the popular Netflix show.

With 465 million ‘Running Up That Hill” streams (and counting) on Spotify, the service took notice and partnered with up Stranger Things, which subsequently tweeted a link to an Upside Down playlist on its official Twitter account:

wanna know what songs would save YOU from vecna? head to your Upside Down Playlist on @Spotify to find out🎧 the first Song on the list = your savior song 🎧 [https://t.co/rZ10wCJ6tA] pic.twitter.com/N3KOU3ohSKJune 29, 2022

By clicking that link, Spotify users can check out an Upside Down playlist topped by a personal saviour song as determined by the service’s algorithms. Does it work? Well, sort of. My own saviour song as determined by Spotify is ‘Simba Lines’ by something called Baked Shrimp. I had never heard it before and, after a brief listen, determined it should instead be at the bottom of my list or, better yet, cast into the Upside Down.

The second song, Iggy Pop’s ‘Lust for Life’, was more my speed, and absolutely would provide the burst of energy required for me to evade the ruthless Vecna. So Spotify isn’t 100% off.

Competition in the music streaming world is fierce, with Apple Music and Amazon Music Unlimited steadily chipping away at Spotify’s dominance along with smaller services like Deezer, Tidal, and Qobuz. Given that situation, Spotify is constantly adding new features – everything from podcasts, to the recently announced audiobooks, to a new Karaoke mode where users can sing along to tracks and the service listens in and rates the performance on a scale of 1-100.

Despite these efforts, Spotify, which has recently seen a big dip in its paid subscriber base, doesn’t exactly stack up as a good value compared to its competitors. A main sticking point is the no-show of Spotify HiFi, a lossless CD-quality tier that the company originally announced back in February 2021. As the company continues to keep that promised upgrade on the back burner, Apple Music and Amazon Music have added both lossless and high-res audio to their basic under-$10 subscription plans, while Tidal offers lossless audio at the same price. Spatial Audio is another compelling feature found on all three of those competing services, and it’s one that Spotify has yet to even mention as a potential upgrade.

What Spotify does have to offer that differentiates it is a free ad-supported service tier, though quality on that is limited to a paltry 160kbps (on the mobile app, 120kbps on desktop). Its $9.99/month Premium tier, in contrast, maxes out at 320kbps.

Between its free ad-supported tier, clever features like Karaoke mode, and sly marketing partnerships such as the one with Stranger Things, Spotify could manage to stay relevant and keep its listener base stable, even as its paid-service competition provides superior offerings. When you add these all up, the cumulative result might just be Spotify’s very own saviour song.

Cancelling Amazon Prime is now easier, but only in Europe

Biosensor startup Monod lands $6M and spins out of Univ. of Washington’s Institute for Protein Design

The Fed’s flawed plan to avoid a recession