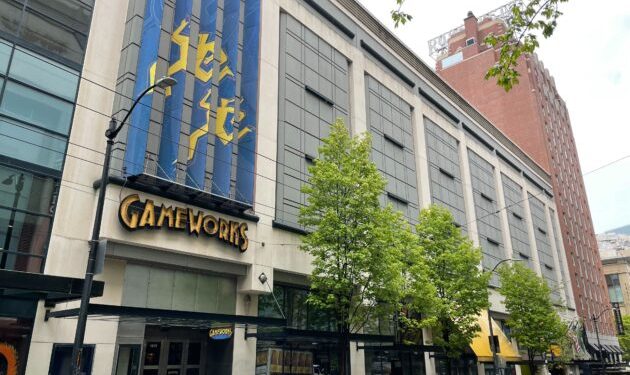 GameWorks Seattle is getting ready to reboot this summer.

The downtown barcade, which was a tentpole of the region’s geek community until its COVID-19-induced closure in December 2021, is under new management and could reopen as soon as July.

News of a potential GameWorks revival initially spread via social media on Friday morning. The Capitol Hill Seattle Blog was first to report that a new license application had been filed for GameWorks on Thursday, with Greg Stevens and Howard Brand as the applicants.

Edit: A relative of Brand’s has also posted to an open Facebook group for former GameWorks employees, saying on May 4 that the barcade would be open again in “1-2 months.”

According to Stevens, who was the CEO of the nationwide GameWorks chain from 2011 to 2018, the revived GameWorks Seattle will serve as a “focal point” for an overall revival of the restaurant/arcade chain.

“From a passion perspective, what we did with the GameWorks brand, and where we had it positioned, we were really disappointed with what happened next,” Stevens told GeekWire. “It was like, ‘What a shame,’ but also, it was an interesting opportunity.”

Stevens said they wanted to bring the brand back to life because they believe it resonated with communities, and because they liked what GameWorks was.

He and Brand are currently the sole sources of funding behind the reboot, with no plans to seek outside investment, or pursue expansion beyond Seattle, until at least six months after the Seattle location reopens.

The GameWorks chain of entertainment centers was initially founded in 1996 as a joint venture between Japanese video game developer Sega and the film studios Universal Studios and DreamWorks, with initial involvement from Steven Spielberg. The Seattle location on 7th Avenue near Pike Street was its first location, opening in March 1997.

GameWorks cited the slow economic recovery post-pandemic as the primary reason for shutting down its remaining U.S. locations. In addition to Seattle, GameWorks venues were located in Austin; Philadelphia; Schaumberg, Ill.; South Miami; and the Mall of America in Bloomington, Minn.

In addition to its main business as a bar, restaurant, and video arcade, GameWorks Seattle also hosted numerous events for the Seattle gaming community. This included regular esports tournaments, a weekly play session for fighting-game fans on the second floor, a monthly meetup for local Twitch streamers organized by the Seattle Online Broadcasters’ Association, and its appearance in post-apocalyptic virtual form in the award-winning 2020 video game The Last of Us Part II.

A Krusty the Clown pillow in the window at GameWorks Seattle, where other random merchandise could be seen on shelves and in boxes in the darkened venue. (GeekWire Photo / Kurt Schlosser)

According to Stevens, the deal by which he and Brand reacquired GameWorks Seattle also included all of the venue’s assets. This includes its entire collection of arcade machines, none of which were ever sold off.

“Every single piece of equipment is there,” Stevens said. “That was one of the key things we wanted to make sure of. I don’t want to say it’ll be seamless, but it’ll be like it was.”

GameWorks Seattle will reopen with the same events, a similar if not identical menu, and even many of the same employees, many of whom Stevens said reached out in hopes of coming back.

“Our focal point was Seattle,” Stevens said. “It’s been there 20-plus years, and we know it resonates in the community. There’s a strong, loyal following. It was all about how we bring it back to life.”

When asked about the logistics of reopening a business in downtown Seattle in 2022, considering issues the city has had with crime over the past few years, Stevens was optimistic.

“I’m not a Seattle resident, but I’m aware of what’s going on,” Stevens said. “I was kind of expecting it to be a lot worse, and was pleasantly surprised. I was out walking around and felt very safe.

“I think of this as a resurgence,” he added. “Saying in some ways that we believe in downtown Seattle. The life cycles the area has gone through… there are ups and downs, but mostly it’s trending in the right direction.”