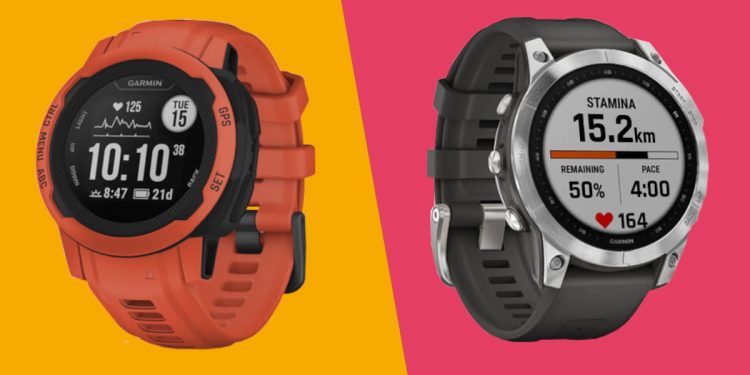 If you’re in the market for a new sports watch, the Garmin Instinct 2 and Garmin Fenix 7 are two devices that are definitely worth your attention. They’re two of the best Garmin watches around – but which one is best for you?

One of the most obvious differences is price – the Fenix 7 is much more expensive than the Instinct 2 – but that doesn’t mean that the Fenix is necessarily better for all wearers and activities.

If you’re into multiple sports, enjoy competing, and want to train smarter to smash your personal records, the Fenix 7 is likely the best watch for you. It’s packed with advanced training tools, and its color display means it’s excellent for navigating new routes on foot or by bike.

However, if you’re hard on your watches and need something rugged and durable, the Instinct 2 would be a better choice – it’s lighter and slimmer than the original Instinct, but still seriously tough, and will shrug off scrapes and knocks. It also has exceptional battery life, particularly if you opt for one of the solar variants.

If you’ve made your mind up already, we’ve rounded up the best deals on the Garmin Fenix 7 and Instinct 2 right here. Otherwise, read on to get the full lowdown on these two great multi-sports watches.

Neither the Garmin Fenix 7 or the Garmin Instinct 2 is an individual watch – they’re whole series with a range of different sizes and specifications, including standard and solar models. To make them easier to compare, we’ve put together tables showing the various specs and features of both ranges.

The Instinct 2 comes in two case sizes (40mm and 45mm), and is available in both standard and solar editions, the latter of which have photovoltaic cells to keep the battery topped up between charges. There’s a standard version, as well as various special editions with additional features to suit specific activities.

The Fenix 7 comes in three sizes (42mm, 47mm, and 51mm), and comes with either standard glass covering the face, solar glass, or sapphire solar crystal, which is tougher and more resistant to scratches. It’s worth noting that the 51mm Fenix 7X only comes in sapphire solar or solar variants.

The Garmin Instinct 2 is available in various special editions, including one specifically for surfers (Image credit: Garmin)

The Garmin Fenix 7 is a more expensive watch than the Instinct 2, but the exact price will depend on which model you choose.

Both the Garmin Fenix 7 and Garmin Instinct have tough fiber-reinforced resin cases, and come fitted with a soft silicone strap as standard (with a quick-release mechanism so you can easily swap it for something different).

The Fenix 7, however, has a smarter look thanks to a brushed metal layer covering the bezel and lugs. The 47mm and 52mm versions also have external screws on the lugs, while the 42mm model has a more minimalist look with internal fixings.

As mentioned above, the Fenix 7 comes with a choice of three case sizes, while the Instinct 2 has two.

The Garmin Fenix 7 comes in three sizes, including the streamlined Fenix 7S, which has a 42mm diameter case (Image credit: Garmin)

Both the Garmin Fenix 7 and Instinct 2 have memory-in-pixel displays, which aren’t as bright as OLED and have a slower refresh rate, but use less power which results in longer battery life.

The Fenix 7 has a color touchscreen display, which means it works well for displaying graphs, charts and maps. If you’re looking for a watch that will help you navigate new running, cycling, or walking routes, it’s a solid choice. The blue backlight does muddy the colors a little though.

The Instinct 2 has a monochrome screen, with a small cutout that can show useful stats like your current calorie burn or step count, and displays useful contextual information as you’re navigating through menus. It’s even more efficient than the Fenix 7’s display, but it also has a lower resolution. Although you can upload routes to the Instinct 2, following them is difficult due to the lack of detail.

The Instinct 2’s display isn’t touch-sensitive; instead, all watch operations are carried out using the buttons around the edge of the case.

The Garmin Instinct 2’s monochrome display is clear and bold, though not ideal for displaying maps (Image credit: Future)

All Fenix and Instinct watches have excellent battery life, but the Instinct 2 has the edge – particularly if you opt for one of the solar models. In fact, Garmin claims you could get indefinite battery life in smartwatch mode if you give your watch sufficient sunlight (the company gave the example of a lifeguard working at a beach). Even if you’re not soaking up the sun all day, you can still expect battery life that runs into weeks rather than hours or days.

As with any sports watch, using features like GPS, music playback, and SpO2 tracking will use more power and reduce battery life.

Larger watches have longer battery life due to their biggest batteries (and solar cells), while smaller models have shorter battery life.

In terms of everyday smartwatch features, the Garmin Fenix 7 has the edge over the Instinct 2. Both watches will display app, text, and call notifications on your wrist, allow you to reject calls with a text message if you’re an Android phone user, and let you control music playback on your phone. They also let you see your calendar, and provide weather forecasts on your wrist.

However, the Fenix 7 also has on-board storage for music (the exact amount varies depending on which model you choose), plus Garmin Pay for making contactless purchases. You can also use Garmin Pay on various public transport networks.

It’s worth noting that neither watch has a microphone for taking calls or using your phone’s voice assistant. For that, you’ll need the Garmin Venu 2 Plus.

Both the Instinct 2 and Fenix 7 are excellent sports watches, with a huge range of sports tracking profiles (particularly for runners, swimmers, and cyclists), and multi-sports modes so you don’t have to stop tracking during events that include more than one discipline.

The Fenix 7 also has a host of extra training tools to help you monitor your fitness and see the results of your workouts. These include training load focus, training effect (aerobic or anaerobic), and training load over the last seven days with guidance on whether you’re maintaining your current fitness level, improving, peaking, or detraining. You also get a real-time stamina monitor, which shows how much energy you have remaining for the rest of your workout and help you judge whether you can afford to push harder, or need to dial back a little to avoid getting over-tired.

Cyclists will benefit from a cycling-specific street map (with popularity ratings for routes), and compatibility with Varia radar systems. Swimmers can log drills, get pacing alerts, and record their critical swim speed.

Whichever watch you choose, you’ll also get Garmin’s all-day heart monitoring with abnormal heart rate alerts, stress tracking, and Body Battery monitor, which shows how much energy you have to tackle the day ahead (and how it drops during the day based on activity and stress).

You’ll also get sleep monitoring, with a sleep score each morning, a breakdown of sleep stage, and tips on how to sleep better in future. Both watches also have an SpO2 monitor, which can track blood oxygen saturation constantly, just throughout the night, or via spot checks.