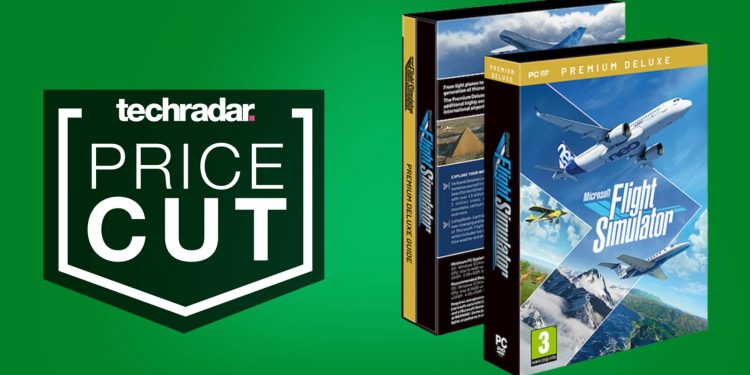 If you’ve been holding off on picking up Microsoft Flight Simulator then now could be the perfect opportunity.

As part of Amazon’s Prime Day deals, Microsoft Flight Simulator has had its price slashed in both the UK and US, meaning you can soar the skies for less. In the UK, the Standard Edition is down to just £46.98 while those in the US can save $15 on the  Deluxe, Premium Deluxe, and Standard Editions. (Not in the UK or US? Scroll down for deals in your region).

It’s worth noting all these deals are for digital editions of the game but they will work across Xbox Series X, Xbox Series S, and PC.

Microsoft Flight Simulator: Deluxe Game of the Year Edition (Xbox Series X|S, PC): $89.99 $74.99 at Amazon
Save $15 – If you fancy a few more bells and whistles than the Standard Edition has to offer, then it’s worth considering the Deluxe GOTY Edition which comes with everything included in the Standard Edition plus an additional five airplanes and five handcrafted airports.View Deal

These aren’t the lowest prices we’ve seen for Microsoft Flight Simulator and we imagine that we’ll see even bigger discounts during Black Friday 2022, but they’re not to be sniffed at if you’ve been eyeing the Xbox and PC exclusive, especially as it’s one of the best Xbox Series X games available right now.

It’s a great time to pick up Microsoft Flight Sim as the Top Gun: Maverick DLC was recently released (which is free to those on Xbox Series X|S and PC), adding high-speed challenges and new liveries that make you really feel like Tom Cruise as you fly through the skies.

What’s more, an extended 40th Anniversary Edition of Microsoft Flight Simulator is set to release in November, which adds new aircraft from across the series and will be free for those who already own the base game.

If that’s not tempting enough, we’re also seeing some excellent deals on Thrustmaster flight sticks right now that will take your flight sim experience to another level. Check them out, below:

Save $40 – This bundle includes everything you need to up your game when it comes to flight combat games. If you’re wanting to take the dive into sim games but don’t want to (seriously) break the bank this is a good way to go. Though, we have seen this bundle go for more than $100 less in the past.

Save $40 – If you’re not looking for something as comprehensive as the FCS Flight Pack, this is an excellent entry point to Flight SIm peripherals. If you enjoy using it, expect to upgrade in the not too distant future. If you don’t, well, you didn’t drop $400 on a hobby that didn’t take off.

Save $55 – If you already have a flight stick and are looking to expand your sim setup then a throttle quadrant is a good next step. This gives you find control over your plane’s engines. This is the cheapest we’ve seen this peripheral appear on Amazon.

Save $20 – The TCA Sidestick is a great first peripheral to pick up if you’ve been getting into Microsoft Flight Simulator. You can pick up additional add-ons, like pedals and throttle, but this is a good way to test the waters of your hobby.

Thrustmaster T.Flight Hotas 4 – Joystick and Throttle for PS5 / PS4 / PC: £99.99 £59.99 at Amazon
Save £40 – So, we have actually seen this Hotas set go for £10 less in the past, but if you’re looking to up your game when it comes to flight combat then this is a great entry-level joystick and throttle, and this is still a substantial saving.View Deal

Thrustmaster TCA Yoke Pack Boeing Edition: £414.99 £379.99 at Amazon
Save £35 – Do you need an officially licensed Boeing yoke and throttle quadrant that’s a 1:1 replica of the Boeing 787 airliner? Probably not. Would you like one? I can’t speak for you but it would make for quite an exciting Microsoft Flight Simulator add on. We’ve seen this go for slightly less in the past, but a 20% discount isn’t to be sniffed at.View Deal

Thrustmaster TCA Officer Pack Airbus Edition: £159.99 £127.99 at Amazon
Save £32 – If you’re looking to up your Microsoft Flight Simulator game, this is a good sidestick and throttle quadrant setup. You can invest a lot in these peripherals, but if you’re just getting into the hobby, Thrustmaster is a respected brand. However, this bundle has gone for less in the past, so consider holding off until Black Friday.View Deal

Thrustmaster TCA Sidestick Airbus Edition: £64.99 £49.99 at Amazon
Save £15 – One of the best peripherals you can buy to invest in your flight sim hobby is a sidestick, these give you much finer control of your aircraft. If you’re dipping your toe into the water, this is a good place to start. This sidestick has gone for £42 in the past but this isn’t a terrible price. View Deal

No matter where you live, you’ll find all the lowest prices for Microsoft Flight Simulator from around the web right here, with offers available in your region.