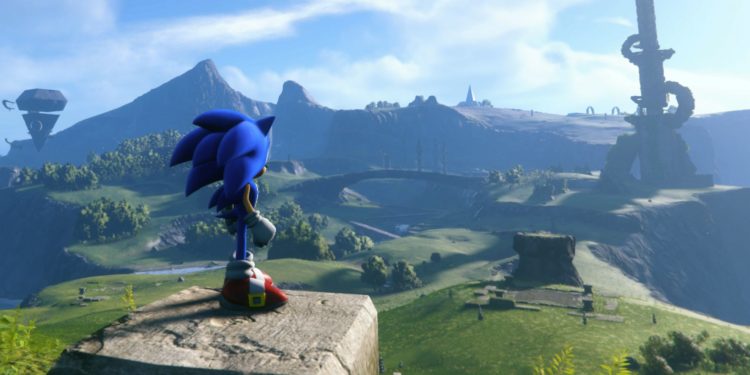 While we still know little about Sonic Frontiers, the first open-world adventure for the super-fast hedgehog, there is a good reason to hope it will be something special: one of the main writers on the title is Ian Flynn, a big name in the Sonic community, and chief writer on Archie Comic’s Sonic the Hedgehog series and lead writer on IDW Publishing’s Sonic the Hedgehog comics.

Flynn’s path to Sonic Frontiers gives hope Sonic fans (or any fans, really) can, with perseverance, luck, and talent, one day help create the thing they love.

Flynn’s love of Sonic started when his dad brought home a Sega Genesis and Sonic the Hedgehog 2. A passion for the cartoons and comics quickly followed. “They got me hooked young,” Flynn tells us.

Throughout college and working on his English degree, Flynn remained a fan of the blue hedgehog. But on the other side, he panicked: “‘What does one actually do with an English degree?’ I asked myself.” So he decided to try and mix his passions and write a Sonic comic.

What does one actually do with an English degree?

Submitting unsolicited manuscripts to comic companies isn’t the norm for landing a job in the industry – not that there is a standard route – and it didn’t immediately pay off. Speaking to (now defunct) website Dreamflint back in 2006, Flynn explained how he sent in scripts for four years before then-editor of the Archie Comic’s Sonic The Hedgehog series, Mike Pellerito, gave Flynn a shot. Flynn told us how he started by writing data files – pages that appeared in the comics and gave detailed breakdowns of characters and locations –  though he then moved on to penning test scripts.

Flynn rose fast; within a few months he had become the lead writer of the Sonic the Hedgehog series, a position he held for over a decade.

Going to the source

“There was always the hope,” Flynn says, talking about working on a Sonic game. “After all, I beat the odds and landed my dream job with the comic, so why not hope lightning would strike more than once?”

Still, Flynn wasn’t short of Sonic work – in addition to writing the main book, he also took on writing duties for comics based on the Sonic X and Sonic Boom television series. “Both books took a more comedic approach than the main series,” Flynn explains. “Sonic X was more out of a need to stand out, but also as a way of finding the fun in a series that was under much tighter restrictions. Sonic Boom followed in the footsteps of the cartoon rather than the games and was extra silly.”

Sonic Boom, in particular, opened up a surprising new avenue for Flynn. Showrunner Bill Freiberger had communicated with then-editor Paul Kaminski to have some of the cartoon’s writers contribute to the comic, and vice versa. “[Freiberger] coached me on how to write for TV versus comics and workshopped some pitches with me,” Flynn says. “In comics, there’s a very narrow pipeline from me to the artists. The editors and licensors have input, but the comic script is the blueprint for the art team. With TV, you have directors, storyboarders, animators, voice actors, and their directors, all influencing the final product. The TV script is structurally similar but doesn’t need to be as precise in its moment-to-moment descriptions. It’s less of a blueprint and more of a strongly suggested set of directions. I’m a big fan of the current voice team, so it was a thrill to hear my script realized by them.”

Then one day, everything fell apart.

End of an era

I was gutted and more than a little terrified.

Despite having preliminary plans for issue #300 and beyond, all Archie Sonic comics abruptly ceased production in 2017, with no explanation given. This was a gut punch to fans and the books’ creatives alike, Flynn included. “I was gutted and more than a little terrified,” he recalls. “It was my regular gig, a reliable source of income, and my dream job. All of that was gone in the blink of an eye. And right before Christmas. If there was a new book, I hoped I might be involved in some capacity and point out all the talented folks I had worked with, but there were no guarantees.”

It wasn’t long after Archie Sonic’s cancelation that IDW announced it had gained the publishing rights to Sonic comics. The fans immediately jumped on the bandwagon to try and get Flynn on board. Then-editor Joe Hughes reached out to Flynn and asked if he was interested. “The answer was a thankful and emphatic ‘Yes,’” Flynn says.

At this point in his writing career, Flynn’s written for multiple Sonic comics across two different publishers, game tie-in stories, and cartoons. His fans have clamored for years for Sega to let him work on one of the games, and, at last, that opportunity has come.

“The working relationship between IDW and Sega is a bit different than the Archie days,” Flynn says, “which opened up different avenues of communication. I can’t say for certain who took notice of me when, but the offer was made [to work on Sonic Frontiers], and I gave another emphatic ‘Yes.’”

The chance to work on a significant Sonic title is “Surreal,” Flynn says. “Daunting, even. There are a lot of expectations and assumptions, and all I can do is my best and hope folks enjoy the experience. The team has been a pleasure to work with, and I hope to do it again one day.”

There's been yet another massive crypto heist