The brutal logic behind measures targeting the central bank 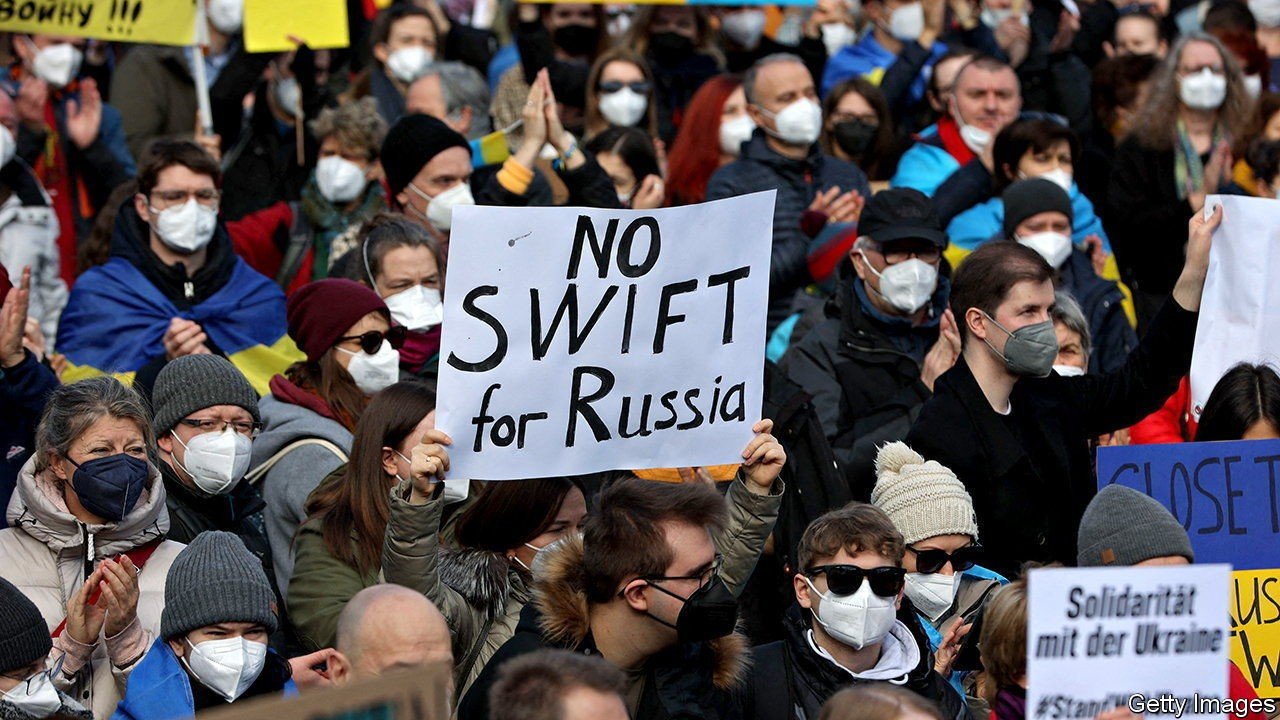 EVER SINCE Russia seized Crimea in 2014 Western sanctions have failed to bite or act as a credible deterrent against Russian aggression. The new measures targeting Russia’s financial system announced by America, the EU and other allies on February 26th change that. They have come too late to prevent an invasion of Ukraine but they are capable of triggering financial mayhem in Russia because they target its central bank and may lead to the freezing of its $630bn of foreign-exchange reserves. This could trigger a run on Russia’s banks and currency, and will cause shudders in global markets and a further spike in energy prices. It may also trigger Russian retaliation. On February 27th Russia said the sanctions were “illegitimate” and that Russia’s nuclear forces had been put on a heightened level of alertness in response. The West’s deployment of this economic weapon will also be watched with slack-jawed shock in China, which has $3.4trn of reserves and which will now be rethinking how to resist Western pressure in the event of a war over Taiwan.

Up until now Western sanctions have been long on macho rhetoric about crushing Russia but short on clout. For example, the penalties on oligarchs and their offshore wealth have led some tycoons to call for an end to the bloodshed, but not changed decision-making in the Kremlin. Meanwhile limits on Western technology and industrial exports to Russia will take months or years to have an effect. Even American sanctions announced on February 24th against Sberbank and VTB Bank, which together hold 75% of the Russian banking industry’s assets, were a serious but not killer blow, particularly since energy transactions were exempted. Russia’s “fortress” financial system looked capable of withstanding the economic weapons that the West dared to use.

The salvo on February 26th goes much further. Many of the headlines in America and Europe have dwelled on the decision to cut off some Russian banks, probably Sberbank and VTB, from SWIFT, the global cross-border payments messaging system. In fact the SWIFT decision is incremental rather than a game-changer. It will make all counterparties, not just Western ones, wary of dealing with these firms. If they choose to do so, they will have to resort to using email and phone to communicate, adding a layer of hassle.

Instead, the really big step is to target the institution at the heart of Russia’s fortress economy, the central bank. It holds $630bn of foreign reserves, equivalent to 38% of Russia’s GDP in 2021 (the sanctions may also cover a sovereign-wealth fund with further holdings). Officials in the Biden administration say that they, acting with Europe, will prevent the central bank from using these reserves to undermine the impact of sanctions. As part of the fortress strategy Russia has shifted the composition of its reserves away from dollars: as of June 2021, it held only 16% in greenbacks, versus 32% in euros, 22% in gold and 13% in Chinese yuan. However, it is likely that the majority of its holdings of securities, bank deposits and other instruments, regardless of the currency they are denominated in, are held in accounts with financial institutions or in jurisdictions that will enforce Western sanctions. That means some, or even much, of Russia’s national war chest can be frozen.

Responding to the new measures the central bank said on February 27th that it had all necessary resources and instruments to maintain financial stability. But the implications are daunting. If the central bank does not have instant access to the reserves it will be hard for it to intervene in the currency market by using foreign cash to support the sagging rouble, as it has done in the past few days. The central bank may be unable to offer foreign-currency liquidity to banks that are under sanctions, in turn increasing the probability that they may default on their foreign-currency obligations to counterparties. And it will be unable to act as a middle-man for such banks, making or receiving foreign payments with foreign counterparties on their behalf, which is one theoretical way of evading sanctions.

That all points to an intensifying panic in Russia’s financial system. So far the damage from the war has been severe but tolerable. The currency has fallen by 10% year-to-date, the stockmarket by 35% and the share prices of the biggest banks by over 50%. As of February 25th the cost of insuring against a Russian government default was on a par with Turkey. Now the pressure is likely to intensify. Ordinary Russians may lose confidence in the banking system, although providing their withdrawals are denominated in roubles the central bank can offset this by offering rouble loans to the banks. Thanks to its oil earnings, Russia runs a current-account surplus, earning more from abroad than it buys from abroad. But if there is panic and capital flight, without access to its reserves, it could be forced to introduce tight capital controls to prevent a currency collapse. It may also choose to temporarily close the financial markets (short-selling of shares has already been banned).

So far, while there have been some signs of Chinese banks steering clear of dollar-denominated transactions with Russian firms, there has been little sign that China or many other Asian countries intend to enforce Western sanctions. But now, with a higher risk of default on foreign-currency obligations by Russian banks, firms and the government, all of their counterparties, not just Western ones, will be more wary of them.

The new measures are sufficiently severe that they may be treated by Russia as something close to an act of war, and lead to it retaliating. On February 27th it said that it had put its nuclear forces on a “special regime of duty”, which means a heightened level of alertness. This is designed to signal that the Kremlin does not believe that there is a neat boundary between economic and conventional warfare. The West may now have to alter its nuclear posture in response. There are other ways for Russia to retaliate. One path is intensifying cyber-attacks on Western institutions. Another is for it to limit gas supplies to Europe. Up until February 25th the supply of gas from Gazprom through Ukraine had been boosted back to normal levels, according to Bloomberg. But Russia could now taper down supply. This would have only a moderate financial impact on Russia (oil exports are far more important to its economy) but would lead to higher energy prices and consumer bills in Europe. In this scenario the West would still have other economic weapons with which to escalate, including blocks on consumer internet services or sanctions on Russian oil.

Whether the West’s newfound resolve succeeds in inflicting a devastating blow on Russia’s economy before Russia inflicts a devastating military blow on Ukraine remains to be seen. But the new measures will inflict heavy damage on Russia. And they also represent a rubicon that will fundamentally alter how sanctions and the global economy work. That is because plenty of other countries that pursue foreign policies that America does not agree with hold large sums of reserves. The largest of all is China, much of whose vast savings are held in Western financial instruments or through Western firms. It will be watching and learning from Russia’s financial squeeze, and how Russia retaliates, and trying to assess how it can avoid becoming crushed by the West’s financial vice. ■

For more expert analysis of the biggest stories in economics, business and markets, sign up to Money Talks, our weekly newsletter