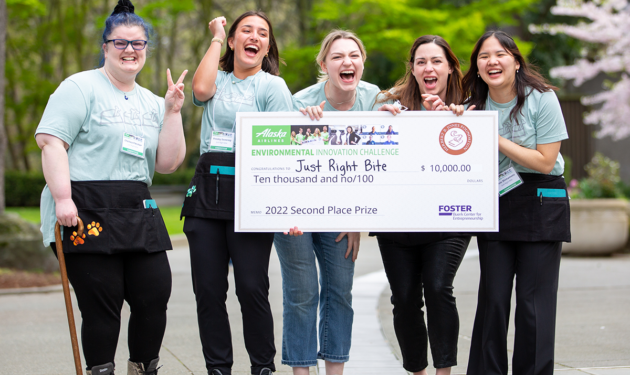 You may have heard of insect-based food for humans.

Now the sustainable alternative is expanding to pets.

Just Right Bite, a startup led by six women from the University of Washington, won the $10,000 Herbert B. Jones Foundation Second Place Prize at the 2022 Alaska Airlines Environmental Innovation Challenge earlier this month for its insect-based pet food product.

“It started with me just making treats in my kitchen,” Morse said.

Morse, a student in the master of science in entrepreneurship program at UW, was joined by her peers in their autumn quarter 2021 environmental challenge practicum to pioneer a startup that focused on sustainability. Chelsea Fletcher and Hannah Walls-Scott gravitated toward Morse through their common vision.

“We don’t think that we should have to compromise on being sustainable and being kinder to the planet in order to feed our pets,” Fletcher said.

With $595 in prototype funding from the Buerk Center for Entrepreneurship, Just Right Bite began testing different measurements of insect-based flour to create the first pet treat in their own kitchens. After months of trial-and-error, the team brought its prototype for pets (and humans) to try at the competition.

The team of undergraduate and graduate students leveraged their expertise to craft a brand image and prototype for Just Right Bite. The bright colors and branded stickers drew attendees to their display.

Just Right Bite will pitch its product in the upcoming Dempsey Startup Competition where it could win up to $25,000 in prize money.

Fletcher continues to refine Just Right Bite’s product to increase shelf stability. The team aims to get their product out to customers as it grows as a brand.

“We’re looking at our options and our vision and deciding which route is appropriate for us and what we want to achieve,” Morse said.

Apple is now using more recyled products than ever – even gold

OnePlus is about to launch a phone with 150W fast charging