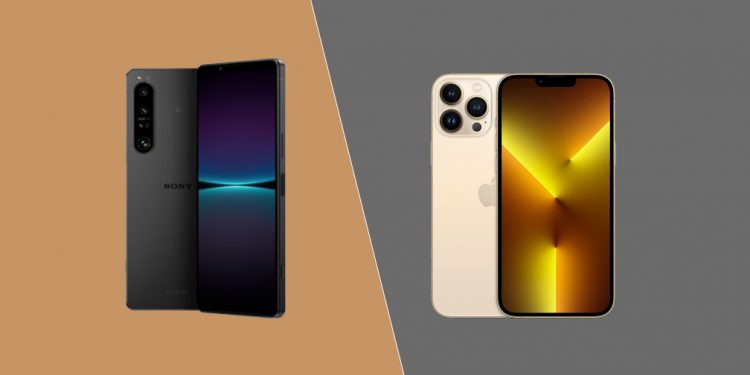 But when it comes to creating a phone that pros and media types love to use, Apple is the king of the hill. Its iPhone 13 Pro Max is in the running to be dubbed the best flagship phone in the current market because of its all-round excellence.

Does Sony have the key to access that same exclusive club? Let’s take a look.

There’s no word on Australian availability just yet, but we’re not holding out hope for any. Sony usually doesn’t sell its phones in the region.

All in all, it’s a win for the iPhone 13 Pro Max in terms of both price and availability.

With the iPhone 13 Pro Max, Apple has also stuck with the design language of its previous phone. Like the iPhone 12 Pro Max, the 13 has a flat stainless steel frame and equally flat front and rear surfaces.

A key reason for the Sony Xperia 1 IV’s height is its tall forehead and chin bezels. Unlike virtually every other current flagship, it houses its selfie camera above the screen rather than in a display notch.

The iPhone, of course, has the mother of all screen notches eating into the top edge of its display. Apple claims to have reduced the size of the notch by 20%, but it’s still a bit of an eyesore.

Sony always packs its phone edges with points of interest, which explains the physical camera button and the 3.5mm headphone jack – these should appeal to photographers and audiophiles respectively.

Around back, the iPhone 13 Pro Max organizes its camera sensors in a square configuration; Sony’s are configured in something like a vertical lozenge.

You can get the Sony Xperia 1 IV in Black, White, or Purple. Over in iPhone-land, there’s a wider range of color options: Graphite, Gold, Silver, Sierra Blue, and Alpine Green.

Both phones are suitably dust and water-resistant. The iPhone 13 Pro Max has an IP68 rating, while the Sony Xperia 1 IV gets an even more thorough IP68/IP65 certification.

There’s Gorilla Glass Victus protecting the screen of the Sony;Apple has fitted the iPhone with its Ceramic Shield, which is made by embedding ceramic nanocrystals into the glass by way of a high-temperature crystallization process.

This means that the Sony Xperia 1 IV is the only current flagship that can play back 4K content natively. That’s clearly what Sony is aiming for here, together with that 21:9 aspect ratio and unbroken canvas.

Both displays refresh at a maximum of 120Hz, so they’re equally fluid.

Sony has increased the brightness of its display by 50%. It remains to be seen if that helps it compete with the punchy iPhone panel, which remains one of the best in the business.

Both of these phones pack triple 12MP camera systems, and both manufacturers are known for their natural color science. But that’s about where the similarities end.

Apple and Sony take fundamentally different approaches to photography. The iPhone is all about the fire and forget experience, unburdened by fiddly menus and the need to think through one’s framing.

Sony’s Xperia 1 line is all about pro-level control, with an in-depth camera app that mirrors its high-end Alpha line of cameras, and a physical two-stage camera shutter button on the right-hand edge.

The big advancement with the Xperia 1 IV is with that telephoto system. This time around, you get a continuous zoom between 70mm and 125mm, roughly equating to an optical zoom that can fall anywhere between 3.5x and 5.2x. That’s a first.

This is led by a large (and, at f/1.5, wide open) main sensor that can capture some seriously impressive images in all lighting conditions, aided by an uncannily steady, sensor shift stabilization system. Even the ultra-wide can take sharp nighttime shots this time around, too.

Hardware aside, a large part of the fantastic image quality comes down to Apple’s leading image processing technology, which helps produce excellent results with minimal input. Sony’s phones have never been able to achieve the same, though it does offer unmatched control over your shots.

Apple’s cameras have always had an edge over the competition in video recording, but Sony is looking to make progress with the Xperia 1 IV. The Sony’s latest phone captures 4K 120fps slow-mo recording to the iPhone’s 4K/60fps; and Sony has also imbued the Xperia 1 IV with wider dynamic range and a Videography Pro mode for live streaming.

The iPhone 13 Pro Max has its own video tricks, including a Cinematic Mode that enables you to apply Portrait-like bokeh effects to your footage and adjust the point of focus in post.

Both phones have 12MP selfie cameras, but the Xperia 1 IV’s is the larger sensor of the two.

We all know the story by now. Android phones can keep one-upping themselves on performance, but they’re still going to fall short of Apple’s latest.

We haven’t been able to put the Sony Xperia 1 IV through its paces just yet, but we can confidently tell you now that it won’t be as fast as the iPhone 13 Pro Max. That’s because it’s running the exact same Snapdragon 8 Gen 1 chip that powers most of its rivals, from the Xiaomi 12 Pro to the Oppo Find X5 Pro.

And in all of our testing and benchmarking, those phones fall comfortably shy of the iPhone 13 Pro Max. The key to that is Apple’s latest custom A15 Bionic chip, which is a monster.

Benchmarks aside though, you won’t notice the performance difference between the latest iPhone and any Snapdragon 8 Gen 1 phone. Both chips are way more capable than they need to be for any modern task, from juggling multiple apps to playing high-end 3D games.

The Sony Xperia 1 IV packs double the RAM of the iPhone 13 Pro Max, for what it’s worth (12GB vs 6GB). Still, this isn’t a great deal, given the fundamental differences between the ways iOS and Android handle resources.

Sony has bumped the capacity of its flagship battery up to 5,000mAh. That’s a healthy size for a flagship Android phone, and is much larger than the iPhone 13 Pro Max’s 4,352mAh cell.

Like we just said, though, iOS and Android handle their hardware resources very differently, and we’d hope for rough parity between the two.

The Sony Xperia 1 IV will need to pull the cat out of the bag to match the iPhone 13 Pro Max, though. With the Xperia 1 III, we tended to have around 10% or so left in the tank at the end of a long day. With the iPhone 13 Pro Max, we had a third of a tank left. Hopefully Sony’s brute force capacity increase, alongside the new Snapdragon 8 Gen 1 and software improvements, will close that gap.

Neither phone is among the most impressive when it comes to charging speeds. Sony has equipped its latest phone with the same 30W wired charging support as before, while the iPhone 13 Pro Max can take a similar 27W.

When rivals are boasting 80W, 100W, and even 120W charging, those specs aren’t too great. Still, both manufacturers claim their phones can charge to 50% in just 30 minutes.

Neither manufacturer includes a charger in the box, but at least Apple gives you a cable.

It remains to be seen if those updates are enough to close the 1-point review score gap between its predecessor and the iPhone 13 Pro Max. We were seriously impressed with Apple’s latest for its superb fire-and-forget camera, its excellent battery life, and its peerless performance.

One thing seems certain – Sony is always going to hold a place in the hearts of a certain type of fan obsessed with serious photography, audio fidelity, and proper video playback. But can it mix it with the iPhone in the mainstream this time around?

The Lord of the Rings: Gollum is still on track for its ‘fall 2022’ release window

The Lord of the Rings: Gollum is still on track for its 'fall 2022' release window

iPhone 13 Pro vs OnePlus 9 Pro: Which phone is more deserving of the Pro name?