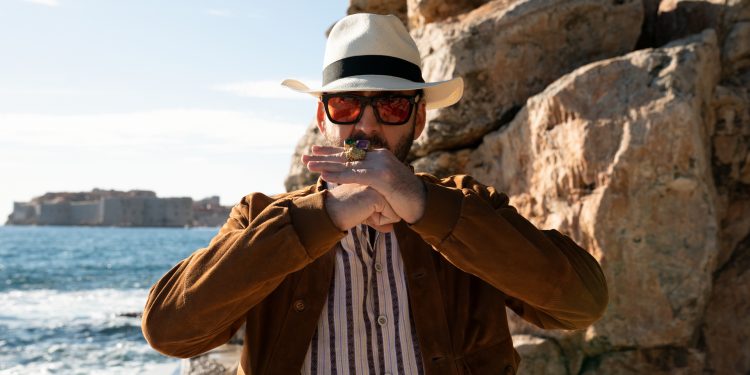 “This must be what it feels like to be a Nick Cage superfan,” I thought to myself during one particular scene in The Unbearable Weight of Massive Talent, aka the actor’s latest movie.

If you’ve seen any of the film’s trailers, you’ll know the scene I mean. It’s the one where Javi Gutierrez – played by The Mandalorian star Pedro Pascal – shows Nick Cage his, well, extensive Nick Cage memorabilia collection. From those Face/Off golden pistols and the chainsaw from Mandy, to a Con Air script and even a Nick Cage sequin cushion, Javi’s exhibition is certainly a sight to behold.

Ordinarily, I’d consider such a collection to be a little creepy or borderline obsessive, even if it’s in keeping with the film’s tongue-in-cheek exploration of Nick Cage’s illustrious acting career. Yet, for some reason, I found myself smiling as I watched Javi walk Cage through the assembled items, all the while reflecting on the thought I opened this article with.

And that’s an odd feeling for me to have experienced. Not because I’m dead inside, but – and this may shock you, given I’m a journalist who covers movies for a living – because I’ve never seen a Nick Cage film before.

I’ll give you a moment to pick your jaw up off the floor. You read that right: I’ve never watched a Nick Cage film in my life. And I wasn’t ashamed to admit it.

That is, until I watched The Unbearable Weight of Massive Talent. Because, whether by divine intervention, the film’s heart-warming tribute to Cage as an actor and person, or simply thanks to how enjoyable it was, I’m now determined to catch as many Nick Cage movies as humanly possible.

Taking the bunny out of the box

Nick Cage has a whale of a time in this metaphysical action comedy flick. (Image credit: Lionsgate)

Okay, I’ll preface the rest of this article by saying that I lied. Somewhat, at least. I’ve seen Nick Cage deliver scene-stealing performances as Big Daddy in 2010’s Kick-Ass and Spider-Man Noir in 2018 superhero film Spider-Man: Into the Spider-Verse. In my mind, though, I don’t consider these to be definitive Nick Cage films. He isn’t the lead in either flick, so they don’t technically count as me watching a Nick Cage movie.

Additionally, I know all about those Nick Cage memes and famous film quotes. I’m also well aware of his movies, ranging from fan favorites like Con Air, The Wicker Man and Face/Off, to lesser-known indie flicks such as Pig and Color Out of Space.

Still, I’ve never felt obliged to take in one or more of his films. That’s not down to a lack of respect – clearly, Cage is a talented individual. Simply put, there are thousands of other movies I’ve wanted to watch instead, such as the latest Marvel movie or an old Christmas classic like It’s a Wonderful Life. Sure, I could have made time to watch a Nick Cage movie but I just, well, haven’t.

The Unbearable Weight of Massive Talent, though, has changed that. And, clearly, I’ve been missing out. On a lot.

Before I go any further, a brief film synopsis: the metaphysical action-comedy stars Nick Cage as a satirical, washed-up version of himself who’s struggling to find a balance between his personal and working life. His estranged wife and daughter are tired of his lack of familial commitment, while his lack of acting opportunities has led to spiraling debts.

Out of desperation, Cage reluctantly accepts a $1 million offer to attend the birthday party of Pascal’s Javi, a billionaire and Cage superfan. It isn’t long, though, before Cage gets more than he bargained for – the actor finding himself embroiled in a CIA-led plot to rescue someone’s kidnapped daughter from Javi, a supposedly notorious arms dealer.

Suffice to say, The Unbearable Weight of Massive Talent is a Nick Cage fan’s dream. There are numerous references to his previous roles, over-the-top acting on Cage’s part, and a touching story that doesn’t deliver anything new but feels enriched by Cage’s presence.

It also helps that Cage appears to be having a delightful time portraying a fictionalized version of himself. Cage turned down the role three times before writer-director Tom Gormican convinced him to take it by writing Cage a personal letter. Gormican’s determination paid off, as Cage is on ludicrously top form; his eclectic acting range on full display across the film’s one hour 40 minute runtime. It may be stating the obvious, but nobody else could have played a parodical version of Cage in the manner that the man himself does – and The Unbearable Weight of Massive Talent is all the better for it.

Tired, wired, and deserving of appreciation

Not even Nick Cage is immune to the delights of Paddington 2. (Image credit: Lionsgate)

Films that put their stars in ridiculous situations are the kind that regularly pique my interest. And boy, does The Unbearable Weight of Massive Talent go to some surreal but laugh-out-loud places.

How about the fact that Cage is coerced by the CIA to help them conduct a rescue operation in a criminal gang’s heartland? Or that Cage and Javi take LSD, become paranoid that they’re being followed, and embark on a hilarious mission to escape their supposed pursuers? What about Cage disguising himself as an Italian mob boss to infiltrate a rival gang? Or – and this is the weirdest, funniest of the lot – Cage making out with a younger, imaginary version of himself from his Wild at Heart days?

These are just four examples of how enjoyably daft The Unbearable Weight of Massive Talent is, and yet Cage goes along with them all; delivering marvelous performances in each scene as if it’s the last time he’ll ever act. He puts his heart and soul into every one and, as someone who isn’t a Nick Cage diehard, his performance got my thinking. If he’s given 100% effort in a film that pokes fun at his expense, how good is he in other roles, no matter how serious, dramatic, or comedy-focused they are?

Caring about his audience

Nick Cage cares about his fans – and they can equally care about him. (Image credit: Lionsgate)

It’s not just Cage’s acting career – or work, as he regularly describes it – that’s made him such a popular figure among film aficionados. By all accounts, he’s one of the most charitable Hollywood stars, donating millions of dollars and supporting various good causes.

He’s also a family man. Cage turned down roles in The Matrix and Peter Jackson’s Lord of the Rings (per People.com) to help raise his son Weston in the late 1990s/early 2000s – a real-life event that appears to have somewhat influenced The Unbearable Weight of Massive Talent’s plot.

By his own admission, Cage is well aware of his messianic status for Cage-ophiles, too. He’s in on the Nick Cage memes and self-deprecating jokes (as a recent New York Times interview reveals). And, after a recent Reddit Ask Me Anything (AMA) involving the actor and his fanbase went viral over how wholesome it was, it’s clear that the affection and respect between Cage and his followers flows both ways.

As an outsider, I can definitely see the appeal of being a Nick Cage fan, as well as the mythos surrounding him. He’s an actor who gives his all in every movie he’s cast in, regardless of whether it’s a blockbuster, an indie film, or a B movie to help pay off his debts. He’s an eloquent individual with an interesting take on a topic or a wild story to tell. He’s an altruistic person with a good heart and the right morals. And, based on the relationship he has with his fans, he doesn’t take that support for granted.

It’s not often that a movie can completely change my opinion of someone, but The Unbearable Weight of Massive Talent has gone a long way to turn me into a devoted Nick Cage follower. If nothing else, I’ll certainly be checking out a few more of his films before I reach a concrete decision. The question is, which one should I watch first?

The Unbearable Weight of Massive Talent is out now in theaters worldwide.