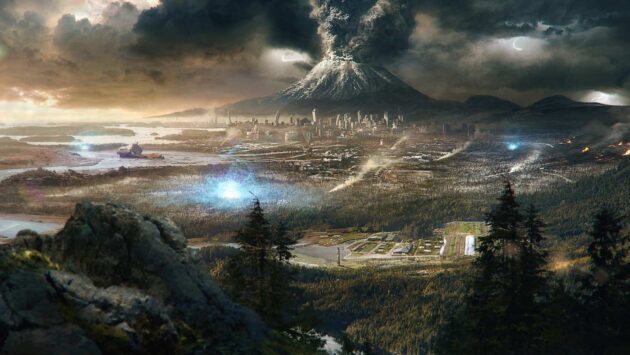 It’s a few hundred years in the future, and Seattle is not okay. (Liithos Image)

The creative director of 2019’s Days Gone announced Thursday that his next project is Ashfall, a Web3 game set in a post-apocalyptic Pacific Northwest.

John Garvin was previously the studio director at the first-party PlayStation developer Bend Studio, in Bend, Ore., from 1997 to 2019. While there, Garvin worked in PlayStation franchises that included Syphon Filter, Resistance, and Uncharted. He left Bend Studio in December 2019 after Days Gone had shipped.

Garvin is now the creator and director of Ashfall, which is under development at the new San Diego-based studio Liithos, founded by Garvin alongside PlayStation veteran Michael Mumbauer and Alex Russman, the head of the Metaverse fund at the HBAR Foundation, which governs the decentralized, ostensibly carbon-negative Hedera network.

Ashfall is planned for release on PC, consoles, and Hedera, with no firm release date. It’s set hundreds of years in the future in the rough vicinity of post-climate apocalypse Seattle, where flooding, wildfires, and the ignition of the volcanic Ring of Fire have all teamed up to wreck the place.

On top of that, pockets of dark energy called the Trace have appeared, which offer a new source of power at the price of many cities’ destruction and the further destabilization of weather patterns.

Against this backdrop, Ashfall is billed as initially being a narrative-driven single-player adventure game, but will subsequently use Web3 tech to evolve in both multiplayer PVE and “player vs. environment” directions, as well as user-generated content and a player-driven economy.

“Our goal is to create a truly next-gen, open world experience,” Garvin said in a statement to VentureBeat. “As always, our focus is on creating beloved characters, captivating stories and evolutionary gameplay and a world worth exploring, not just in games, but other media as well.”

This is a great example of how we’re approaching this IP differently than any game I’ve worked on … we’re bringing everyone along AS we create the world, story and characters … Michael is doing an amazing job of finding AAA talent from all over the world! https://t.co/1XckdUj3uq

Ashfall is being built as a transmedia franchise. The official Liithos site’s digital storefront offers a digital comic book, also named Ashfall, written by Garvin with art by Brett Booth (Teen Titans, StormWatch, Justice League of America), planned for release in September 2023. The comic has an asking price of $100, which includes a “Founder’s Token” NFT.

Where Should I Retire?: This Ecuadorean city in the Andes has perfect weather — and you can retire there for as little as $1,500 a month