Seattle U students tackle real-world computer and engineering projects for Amazon, F5 and others 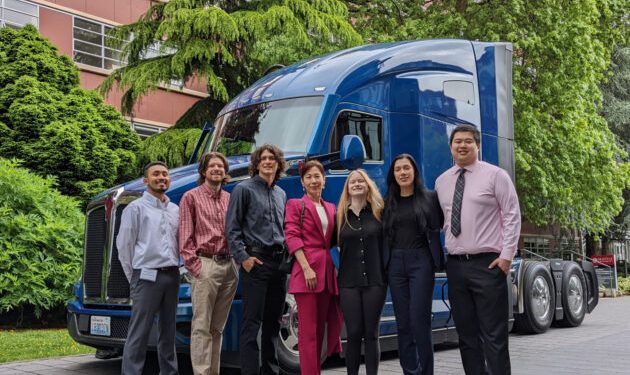 Technology moves so fast, it can be difficult to teach computer science and engineering students the very latest in their fields. So Seattle University tries to make sure its grads “learn to learn.”

On Friday, students presented year-long projects done in partnership with Northwest organizations — from corporations including Amazon, Microsoft and F5 Networks to community groups, government departments, and small businesses such as Seattle City Light, a nonprofit called Mari’s Place for the Arts, and Redmond Dudes Baseball — to help solve their computer science and engineering problems.

Now in its 35th year, Seattle U’s Project Center assigned roughly 180 seniors and master’s degree students to 40 teams to work on the projects.

Students are “faced with a technological challenge that they don’t know the answer to,” said Rachael Brown, director of the Project Center.

Senior Mason Adsero was on one of three teams that partnered with Kenworth Truck Co., a subsidiary of Bellevue, Wash.-based PACCAR. Their project used machine learning to develop a more efficient process for managing the customization of trucks to meet customers’ needs. They trained their model on Kenworth’s engineering database and used Tableau software for visualizing the results. They met via Zoom almost weekly with liaisons from Kenworth.

It was a tech stretch for the students.

“It was pretty overwhelming at first,” said Adsero. “We were all in deep water.”

But the team members said they were successful in creating a working model that they’ll be handing over to Kenworth.

In addition to exploring new tech challenges, the students said that the projects were an opportunity to work in teams; communicate and receive feedback from partner organizations that act as customers; do project management; set schedules and goals; and practice giving presentations.

“It gives them an experience that makes them a more well-rounded professional before they even graduate college,” Brown said.

“It gives them an experience that makes them a more well-rounded professional before they even graduate college.”

Each team had at least one liaison from the partnering organization or “sponsor” plus a faculty advisor.

Larger sponsor organizations pay a fee to participate in the program, while smaller businesses or nonprofits engage for free or pay a smaller amount. The sponsors are able to keep software, devices and other intellectual property created by the effort.

Amazon has collaborated with the Seattle U students since 2001.

The company sponsored six teams this year. That included multiple cloud projects, such as one to classify AWS Partner Network data and another that built a tool for developers to manage workflow, as well as creating technology for monitoring its data centers’ servers.

So does the company actually use the products generated by the students?

“Generally speaking and most often, the students’ projects are proof of concept and do help us determine if a particular program has promise and how it could be executed,” Herdener said.

Profiles of all of the projects can be found here. Keep reading for descriptions of three more teams:

Beavers build dams in some inconvenient places for humans, causing flooding of farmlands, homes and roadways. A three-student team studied the impact of devices called pond levelers to regulate the amount of water stored behind a dam, and the ability of salmon to navigate the dams at different water levels.

The team built their own devices for remotely monitoring water levels every 15 minutes and deployed them at four dam sites. While the students successfully collected data, there were still unanswered questions for the project, so Seattle U applied for and received a grant to continue the work over the summer.

Seniors Ruby Rañoa and Lailan Uy said the project was difficult but rewarding.

“When you plan for field work, you think it’s going to go well,” Uy said. But whatever can go wrong will. “When you get out there, you have to problem solve a lot,” she added.

Officials with Seattle’s St. James Cathedral were eager to work with students to develop plans to reduce their energy use and work toward carbon neutrality. The Catholic church participated in the Seattle U program a decade ago to take initial steps towards energy efficiency.

“The real impetus for this year was recognizing the climate crisis is ramping up, and how can we as a cathedral better care for our resources and the earth,” said Patrick Barredo, St. James’ director of social outreach and advocacy.

Officials with the 115-year-old cathedral had regular Zoom meetings with the students. The team visited the site on multiple occasions, poured over utility bills, analyzed existing equipment and measured the interior spaces.

The students will provide St. James with a final report, and officials said their first step will be installing a new control system to optimize heating of the facility. Future plans could include switching over to electric heat pumps and kitchen appliances, and perhaps installing solar and electric vehicle charging sites.

The hope, Barredo said, is the cathedral will be a model for other churches.

Daniel Lee’s six-student team took on the task of developing monitoring hardware, software and a test platform for Kenworth for measuring the efficiency of its electric truck batteries.

The experience provided lots of learning opportunities, Lee said, including “project management and scheduling because we all have busy schedules and we needed so many pieces to come together at once.”

But that wasn’t all. The seniors also learned “quickly solving problems that came up because we had a few fires and explosions from the electronics,” he said. The team worked through their challenges and created a prototype that could be a model for use with different vehicles.

“It was really nice,” Lee said, “being able to apply everything we’ve learned throughout our four years into an actual product that would actually make a difference, eventually.”

: Want to donate crypto to charity? Ask these 5 questions first