Sennheiser’s next Dolby Atmos soundbar leaks on Amazon, and it looks wild 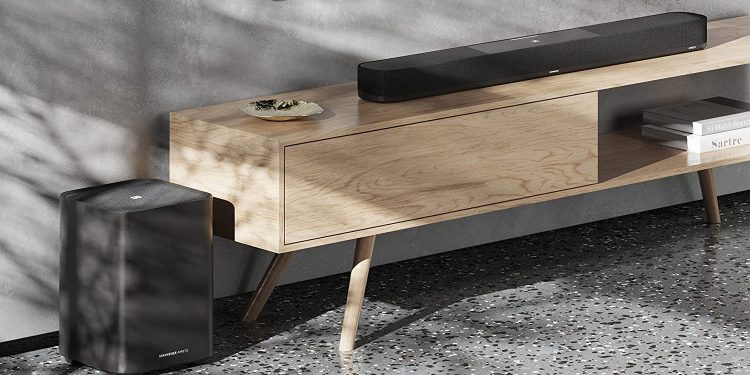 Well, there’s no need to wait for IFA 2022 to find out about Sennheiser’s next soundbar in its awesome Ambeo family: you can read about it on Amazon right now. Or, at least, you could at the time of writing – we’ll explain all the key features below in case it disappears before you see it.

Noticed by user djsimmz and posted to AVSforum, the new Sennheiser Ambeo soundbar features seven full-range drivers to deliver 3D sound, plus two four-inch subwoofers within the bar to make it an all-in-one device with great bass.

3D sound was the trick the original Sennheiser Ambeo 3D was so famous for, but it was massive and massively expensive. It’s still a favorite among home theater enthusiasts (and writers) who tried it, but these days the best soundbars are so much cheaper and still deliver excellent 3D Dolby Atmos sound, so it’s hard to recommend to many people here in 2022.

Which is where the new version comes in, presumably. We can’t see a price at the time of writing, but djsimmz notes a price of $1,500 – which would make it very high-end for a soundbar, but that’s not out of line with high-end one-box options such as the Sony HT-A7000 or Devialet Dione at all.

Here’s the Sennheiser Ambeo Soundbar Plus – note its basically all fabric grille. There’s a lot of sound that’s got to get out, after all. (Image credit: Amazon)

But here’s where the new Ambeo gets wild. It doesn’t have to be a one-box soundbar. As mentioned above, Sennheiser will evidently also sell the Ambeo Sub, which will be a small subwoofer unit with a single up-firing eight-inch driver. Whereas the soundbar alone will be able to reach bass depths of around 37Hz, the sub will take you down to around 27Hz, according to the Amazon listing.

Sure, adding one wireless sub is nothing weird. So how about the fact that you’ll be able to add up to four of the Ambeo Subs to work with your soundbar? And remember there are two subwoofers in the soundbar itself, still!

The listing says that the Ambeo system will auto-calibrate the sound of the subs to match their positioning in your room, so you’ll get a great bass balance from the whole setup.

There will also be an app that will enable you to customize sound modes and more for the whole setup. Dolby Atmos and DTS:X are both supported, along with the 360 Reality Audio format, which is rarer. For music, you can stream over Bluetooth, Apple AirPlay, Spotify Connect, Tidal, and Chromecast.

The ability to add multiple subs to your setup might sound odd, but it’s a sign that Sennheiser is making this new Ambeo to meet high-end expectations, despite being a soundbar-based system.

The thing about low-frequency sound is that, assuming it’s properly calibrated and isn’t shaking the walls, it doesn’t actually travel very far compared to mid or treble soundwaves.

I recently visited a home installation showroom with an elite home theater setup – high-end laser projector, elaborate Bowers & Wilkins speaker system, comfy chairs for about 8 people… you get it. That system had four subwoofers – one in each corner – because it’s the only way to ensure an even, directionless bass that reaches everyone in the room.

So it looks like Sennheiser is really thinking about the modern home theater lover here. Someone with a large living room and one of the best 4K projectors or maybe one of the best 85-inch TVs, but wants to be able to hide the subwoofers away easily – which you can, because the Ambeo Sub looks around the same volume in size as the sub you get in the ultra-compact Yamaha SR-C30A.

Maybe you don’t want four – maybe you just want two for the ultimate bass experience from your 55-inch TV setup. Or you can just stick with the built-in bass if you prefer things to be tidy.

I think the whole thing sounds genius, and given the pedigree of the Ambeo soundbar’s heritage I’m expecting big things here.

Indeed, you have to wonder if this isn’t going to take some of the wind out of the sails of the much-rumored Sonos Sub Mini – the original Sonos Sub can be used alone or in pairs, so assuming the Sub Mini is real, it had better offer at least the option for two to work together now.