A sign on the door at Amazon Books in Seattle’s University Village shopping mall on Wednesday. (GeekWire Photo / Kurt Schlosser)

Reacting to a plot twist that many did not see coming, book lovers, sellers and Amazon watchers were caught off guard Wednesday by the news that the company is abandoning its bookstores and two other lines of physical retail stores.

“This is shocking news,” said John Rossman, a former Amazon executive and the author of books including The Amazon Way and Think Like Amazon. “This is this is the most surprising thing I’ve heard from Amazon in a long time.”

The reason, Rossman said, is that Amazon seemed to be developing all of these different physical retail brands and channels as part of an integrated, effortless, customer experience. In many cases, he pointed out, the stores have been serving not only as retail outlets but as depots for customer pickups and returns.

Amazon likely decided that it was time to end the experiments with these stores after several years of trying to get the unit economics right, he said. The move suggests that Amazon sees more promise for grocery, in particular, to support a strategy of more frequent customer engagement and purchases. People buy milk more than they buy books.

Does the move say anything about Amazon CEO Andy Jassy’s approach after replacing Jeff Bezos in the role?

“It’s just a fresh set of eyes, and a different perspective,” Rossman said. “I think it could be part of rethinking and re-rationalizing everything, especially these large, capital-intensive investments.” 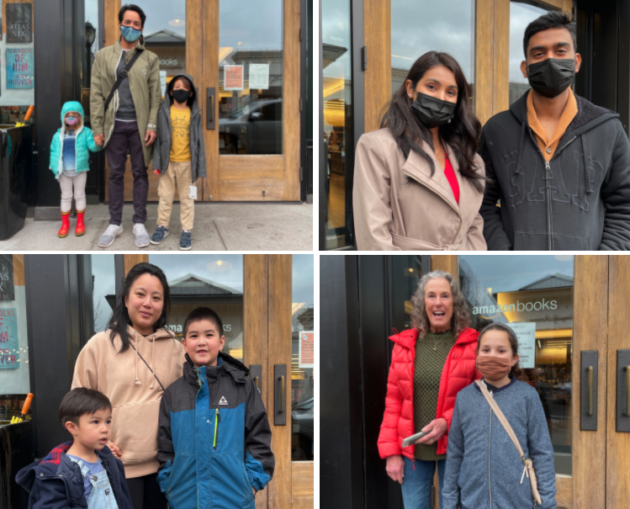 At University Village in Seattle, where the first Amazon Books location opened in 2015, a steady stream of would-be shoppers were met with locked doors on Wednesday. A sign in the widow read, “Sorry we missed you. Our store is temporarily closed. We will reopen Thursday 3/3.”

Several parents were looking forward to the chance to browse physical books with their kids. Amazon Books is the only bookstore in the sprawling shopping mall.

“I love looking at books hands-on before we purchase them. We always seem to pick up at least three books,” said Dorothy Denny, who was with her kids Ethan, 7, and Elijah, 4. “We spend a lot of money on books.”

Bryn Kleiner, 9, was shopping with her grandmother and her mother and had hoped to find a new Baby-Sitter’s Club book that she wanted. She liked the physical store better than shopping online.

Her mom Christa Kleiner said the store was the only reason they drove to U. Village Wednesday. She was one of several shoppers who told GeekWire that they also use the location to process returns for items that they purchased online.

“I try to buy other Amazon products there because it’s not environmentally friendly to have everything shipped,” Kleiner said. “I like their curated selection of games and Top 20 Amazon Finds. We use that store a lot. It makes me sad.”

Priya Vincent and Raj Kumar of Everett were on their monthly date to U. Village where they typically go to lunch and then the bookstore.

“I love going in bookstores to look at books,” Vincent said. “He likes to read online, but I love having the physical book.”

Jonthan Alvarado was headed to the store with his kids Adrian and Celeste. Adrian, who likes graphic novels, said he liked that you didn’t have to “wait until they send a package, you can just grab [a book] and go.”

Alvarado said it’s easier to shop online, and to him, physical retail and bookstores these days feel more like an experience than a necessity.

“This is more like Starbucks Reserve,” he said, comparing Amazon Books to the coffee giant’s fancy roastery locations. “They don’t need to have that. They don’t need all that crazy stuff. It’s like they’re showing off.”

“Physical retail is hard, and grocery expertise doesn’t translate to hard goods. I think they mildly regret the Whole Foods acquisition, as they haven’t integrated it well at all with Amazon Fresh and the two operate pretty independently,” Pachter said. “They clearly hoped for synergy between retail and e-commerce grocery, and it hasn’t worked. I think they pulled the plug on other physical retail because they realize they just aren’t good at it.”

Was this a good move? “Anything that lowers costs without hurting profits or growth is a good idea, so yes, shutting down these retail stores is a good idea,” he said. “I still question their continued Quixotic quest with fashion.”

‘I am somewhat amused by the irony of this news, as Amazon led to the store closures of many competitors in these categories.’

Chelsea Gross, a director analyst at Gartner, called the move a significant pivot in strategy as Amazon shifts the intent of its bricks-and-mortar ambition to build awareness for growth categories such as grocery and apparel rather than expanding reach for categories with existing market share, such as books and electronics.

“I am somewhat amused by the irony of this news, as Amazon led to the store closures of many competitors in these categories,” Gross said. “It seems less to do with the operator and more so the category; even Amazon was unable to take a fresh approach to brick and mortar and sustain the channel.”

In making the announcement, Amazon said it plans to continue operating its Amazon Fresh, Whole Foods Market and Amazon Go grocery and convenience stores, in addition to its Just Walk Out checkout technology. The company will also keep running its new line of Amazon Style fashion stores.

Amazon’s quarterly physical store sales have plateaued in the range of $3 billion to $5 billion for the past several years, not showing the type of growth that the company is accustomed to seeing in other parts of its business.

To move the needle on its own growth, Amazon needs to achieve “significant share in humongous categories,” said Jason Stoffer, a partner at Seattle-based Maveron, a consumer-focused venture capital firm. Grocery and fashion, he said, are “gargantuan compared to books” as physical retail categories.

Amazon 4-star, a chain of stores that featured a curated selection of top-rated products, “felt like a Brookstone or Sharper Image or something, and those were never really good businesses,” Stoffer said. 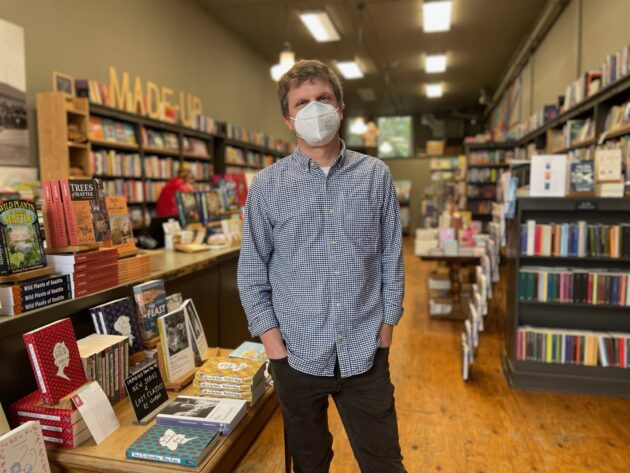 Tom Nissley has gotten a read on Amazon and books from interesting angles — as an editor on the company’s books team from 2000 to 2010, and as the owner of the independent shop Phinney Books since 2014.

Working behind the counter at his shop on Wednesday, he raised two fists above his head when asked for his reaction to the news of Amazon getting out of the physical bookstore business.

“I’m happy at the news,” Nissley said, before adding that he’s never happy when a bookstore closes. But he wasn’t surprised. “It emphasizes that it’s not what they’re good at and it is what we’re good at.”

‘It emphasizes that it’s not what they’re good at and it is what we’re good at.’

He thought the stores, like the company’s website, should have seized on what Amazon was good at, which is being able to provide everything. Instead, Amazon’s super curated, face-out approach to selling books was the opposite of that.

“I always wondered if they would try to do something like Powell’s or something where, ‘Yep, we’re Amazon. We have everything. And now we have it right here,’” Nissley said. “I’m sure the cost would have been immense.”

Nissley liked his job at Amazon, but he said owning a neighborhood bookstore has been wonderful and he’s been well supported.

“I love getting to know the people who buy the books,” he said. “That’s the thing I always missed about Amazon. We could sell 1,000 books by recommending them, but I never met any of the people who bought them.”

Distributed Ledger: Here’s why retail investors will come back to crypto, despite Fed rate hikes, says chief executive at eToro

Top Stories of ’21: Amazon, Microsoft, Meta, COVID, and what’s next for tech in Seattle and beyond