As valuations surge and interest-rate rises loom, can the party last? 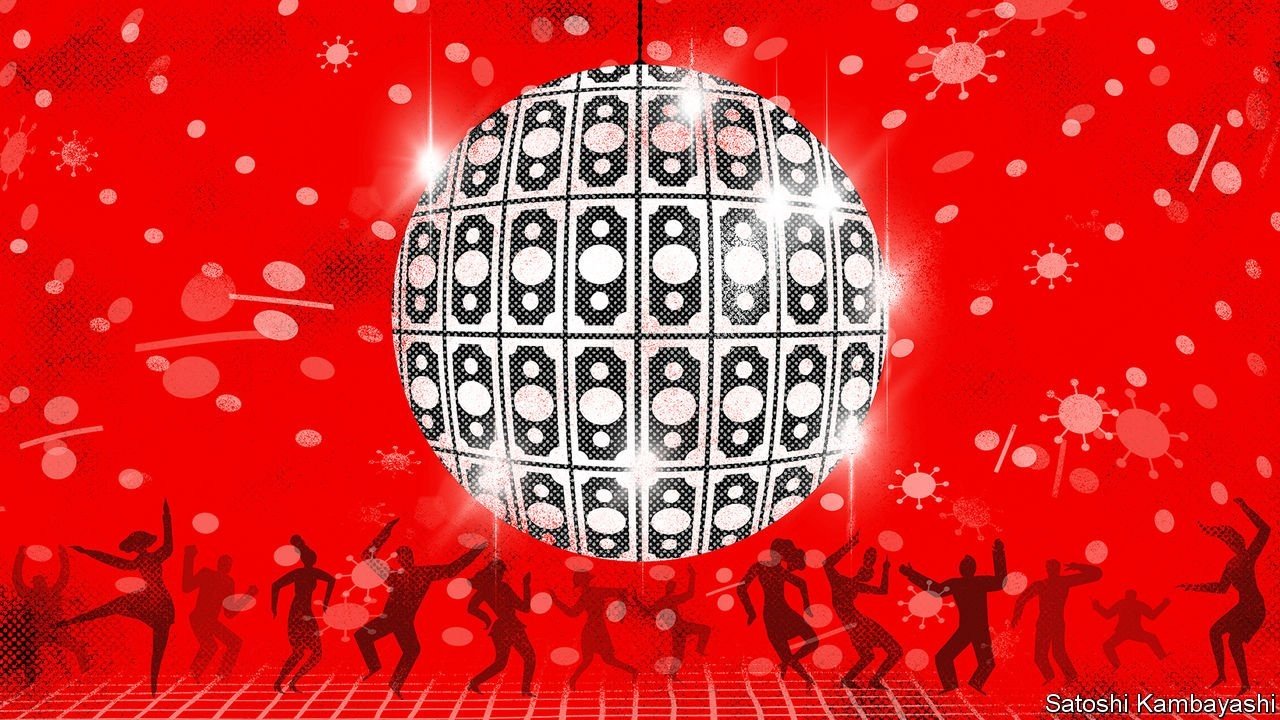 THE BEST pauses in music are those that are least expected. As a banging tune nears its crescendo, just a second of silence, followed by a return of the beat, can send a dance floor wild. Such is the effect covid-19 has had on private markets. In March 2020, when lockdowns sent DJs home everywhere, the beat suddenly stopped. But the pause did not last: after a tepid 2020, this year has been positively revelrous. “To call it a boom feels like an understatement,” says Marcus Frampton of APFC, Alaska’s sovereign-wealth fund. 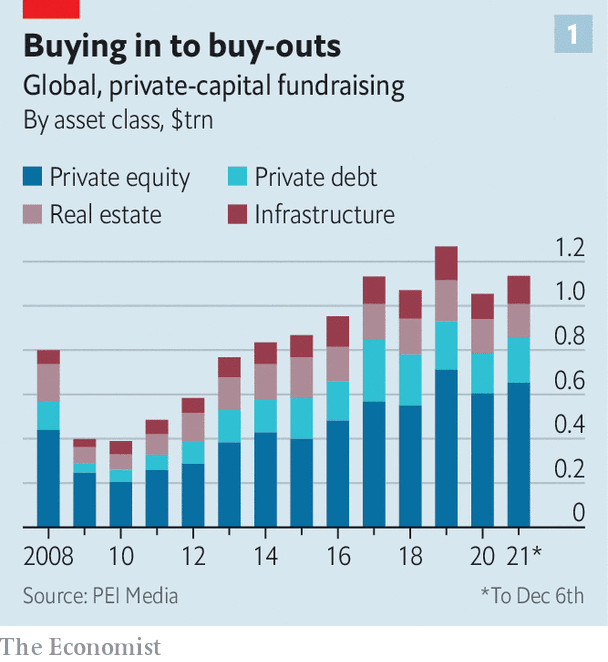 All manner of records are being broken. In the first 11 months of 2021, private-equity (PE) firms sealed over 13,000 deals globally, worth a combined $1.8trn—more than in any previous full year. Private buyers have bought or are eyeing up Sydney Airport, Italy’s phone company, the French football league and Saudi Arabia’s pipelines. Private-capital firms—which include PE shops as well as funds that target credit, infrastructure and property—have raised $1.1trn from end-investors this year, not far off the highest-ever annual tally (see chart 1). The boom is pushing up pay to even more extraordinary levels. On December 10th KKR, a buy-out firm, announced long-term share awards that could net its two new co-chief executives over $1bn each. 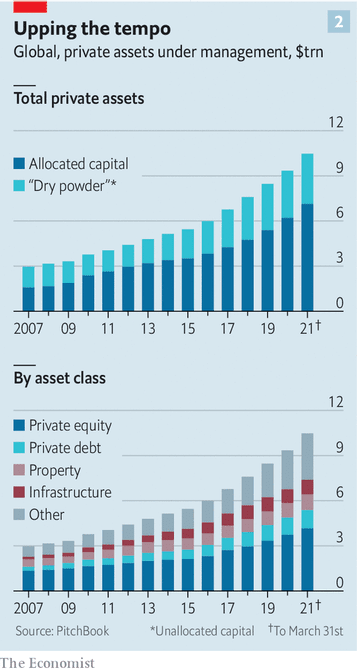 Private assets were once so obscure they were called “alternatives”. The label seems absurd today. Private-capital firms manage a record $10trn of assets, the equivalent of 10% of total assets globally (see chart 2). This includes several types of activity. PE—which consists of taking over companies using debt, juicing up profits and reselling them at a premium—promises racy returns. Infrastructure and, to some extent, property help diversify portfolios. Private credit, meanwhile, lends to smallish firms with a relatively high default risk, earning attractive yields. 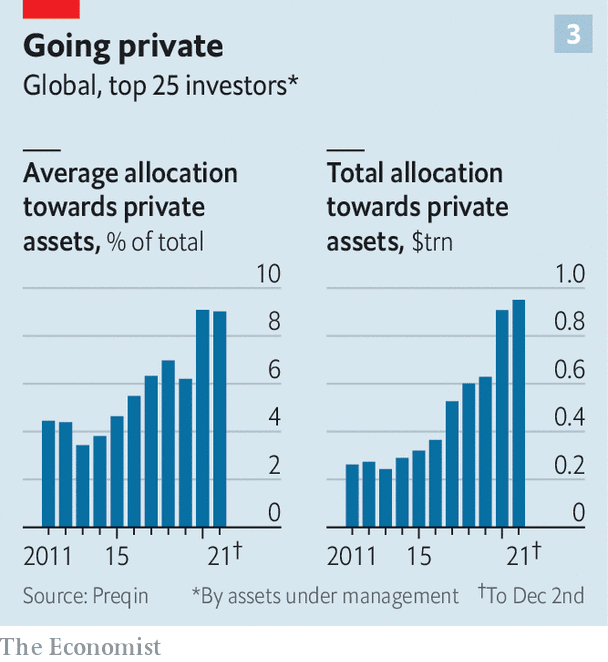 The boom this year reflects both wider exuberance as well as the culmination of a structural shift in finance. In order to meet their future liabilities, institutional investors such as pension funds and insurers must achieve annual returns of 6-7%. With rates at rock-bottom levels they have continued to pile into private assets where, it is argued, returns are more attractive. The Economist calculates that the world’s biggest 25 investors by assets under management—including pension funds, insurers and sovereign funds that together manage $22trn—now have 9% of their assets in private markets, a doubling since 2011 (see chart 3). Australia’s Future Fund, a sovereign-wealth pot of $142bn, allocates 35% of its portfolio towards them; CDPQ, a pension fund in Quebec, nearly 55%.

With capital markets open for initial public offerings, a virtuous circle of activity is taking place: private-capital firms can sell more of their existing assets (to another buyer or by listing them) and return the proceeds to their ultimate investors, who in turn are keen to participate in fresh fundraising for private markets. For Blackstone, for example, the biggest firm of all, asset sales, cash returned and funds raised so far this year have all been roughly double the level of 2020. Greater deal “velocity” means asset managers are deploying capital faster and raising funds more often, says Kelly DePonte of Probitas, a firm that markets such funds to end-investors.

The belief that private returns will be superior reflects a variety of contestable arguments: that investors can earn an “illiquidity premium” for having money locked up in assets that do not trade freely, say, or that private markets are less efficient than public ones, allowing skilled managers to exhibit consistent outperformance. Sceptics think that opaque private markets allow managers to mask high leverage and volatility. For now, the magic formula is working. Some big investors report annual returns in the mid-teens across private-asset classes this year, with those on PE above 50%. By comparison, the S&P 500, an index of American stocks, has produced a return of 24%.

Lured by high returns, some investors are keen to be more directly involved in running private assets, rather than being passive customers of the big private-capital managers. APG, a Dutch pension manager that oversees $703bn, aims to own at least 10-15% of every fund it backs, so as to negotiate veto rights over strategic matters, says Patrick Kanters, its private-markets boss. Many big limited partners also “co-invest” alongside funds directly in portfolio companies, which allows them more discretion over the size of their exposure, and lowers overall fees. Some bypass managers entirely. Co- and direct investments are set to reach $265bn this year, the highest ever amount by far. Large investors in “real” assets, which include property and infrastructure, have become full-fledged developers, enabling them to create their own pipeline of deals—whether student housing or hospitals—and pocket a fat margin.

Yet the scale of the boom is also a source of unease. Valuations are creeping up. In a survey of 71 global institutions carried out by Probitas this autumn, 65% ranked unhealthy competition for deals as the biggest risk, up from 55% last year. Frenetic activity means less due diligence. Limited partners (as the ultimate investors in funds are known) have little time to forge relationships with new managers and diversify their bets. Some are recruiting more staff, triggering what Maxime Aucoin of CDPQ calls a “war for talent”. Meanwhile managers are feeling rushed, too. “Decisions are being made on bigger dollars in fewer days,” notes Steve Moseley of APFC. The amount of “dry power”, the total committed to funds but not yet spent, stands at a record $3.3trn. The pressure to deploy capital means fund managers have less incentive to evaluate potential targets strictly, or to turn down deals.

Alongside frothy behaviour, the other risks are the economy and interest rates. For now a roaring American recovery means that the underlying performance of the firms and assets that private managers own is decent. In November, for example, Blackstone told investors that, for the first time ever, every one of the companies that it owned was experiencing growing revenues. Rising interest rates, however, are a concern, as they can deflate asset prices, impose stress on indebted companies and make it harder to raise debt to finance deals. So far the Federal Reserve’s pivot towards tightening monetary policy has not roiled credit markets: junk-bond yields (a proxy for interest rates on riskier debt) have risen from 4% in September to 4.5% now. But there could be more to come.

Changing the tune
Flush with cash amid a deal frenzy, what is the industry to do? One option would be to liquidate portfolios, that is, to sell more assets than it buys, in effect trying to cash in some chips when prices are high. As yet, however, this does not seem to be happening. Take the figures for three big managers, Blackstone, Carlyle and KKR. So far this year for every $1 of assets, in aggregate, that they have sold, they have bought $1.30. Although Carlyle is being more cautious than the other two firms, overall these figures indicate that the industry thinks the good times will roll on.

That suggests that if there is any restraining force in the industry it is the ultimate investors. Some are hedging risks. Australia’s Future Fund is rebalancing its real-asset portfolio towards “defensive” assets, such as housing blocks with a diverse set of tenants that it can “build and hold for ever”, says Wendy Norris, its deputy investment chief. But few investors think there is an alternative to alternatives. All of those canvassed by The Economist said their allocations would continue to edge up. Some have sour memories from the financial crisis, when they rushed to dump private assets at a loss, instead of snapping up bargains. This time, even if the music stops, they will keep dancing.

The economics of a new China-Laos train line