How an embargo will reverberate 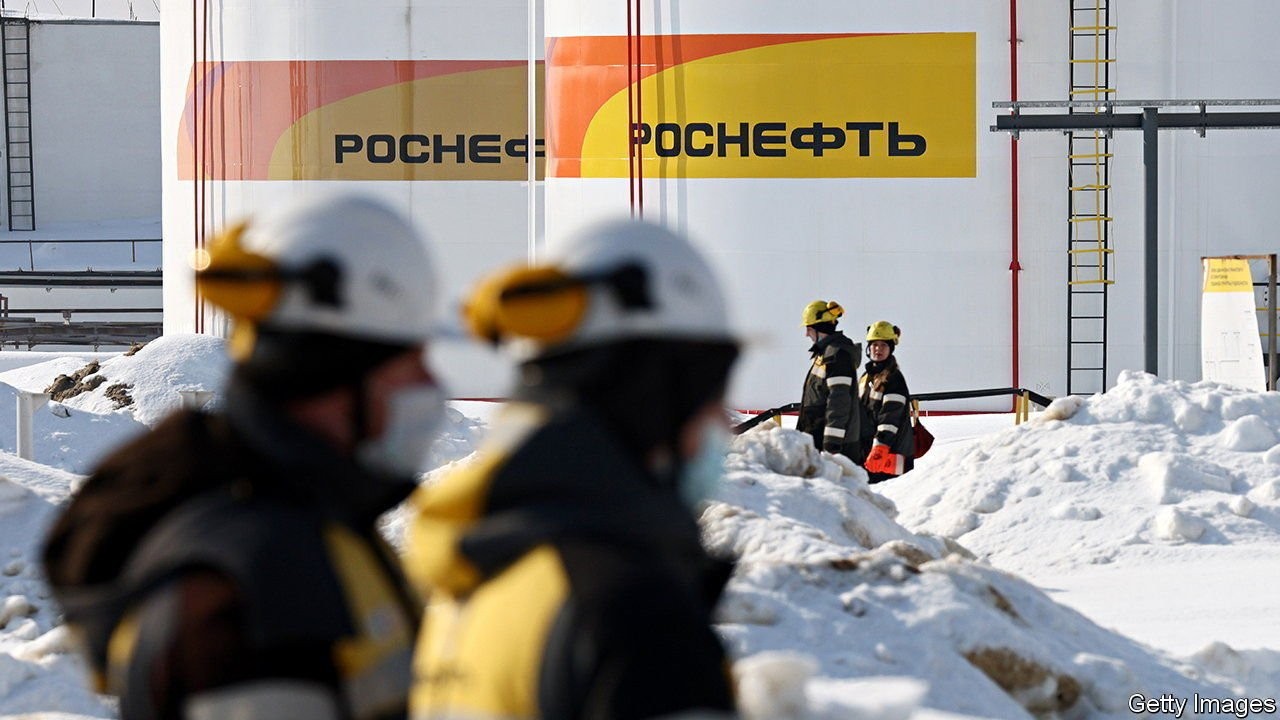 “WE ARE NOW talking to our European partners and allies to look in a co-ordinated way at the prospect of banning the import of Russian oil.” With that bombshell announcement on March 6th, Antony Blinken, America’s secretary of state, set global oil markets ablaze. In the hours that followed, the price of West Texas Intermediate (WTI), the American benchmark crude, shot up by more than 9%. Brent crude soared to nearly $140 a barrel, double the price on December 1st, before dropping to $123 on March 7th. There is now speculation that oil could touch $200 a barrel if the war in Ukraine gets uglier.

That is the volatile backdrop to the oil industry’s most important gathering of the year. Thousands of energy executives and other grandees, including the bosses of Saudi Aramco and Exxon, the secretary-general of the Organisation of the Petroleum Exporting Countries (OPEC) and America’s energy secretary, have come to Houston for CERAWeek, an annual conference put on by S&P Global, a financial-information firm. This week’s programme encompasses long-term issues like climate change and the energy transition but recent events ensure that geopolitics will dominate the gabfest.

Oil markets are on a knife edge for three reasons. First, worries are growing that supply may be inadequate to cover disruptions. The balance between demand and supply was already tight last year. Fossil-fuel consumption rebounded strongly from the covid-induced slump in 2021. The International Energy Agency (IEA), an official forecaster, even expects global oil demand to return to pre-pandemic levels by year-end. With covid in retreat for now, Americans are getting their gas-guzzlers ready for the summer “driving season”. 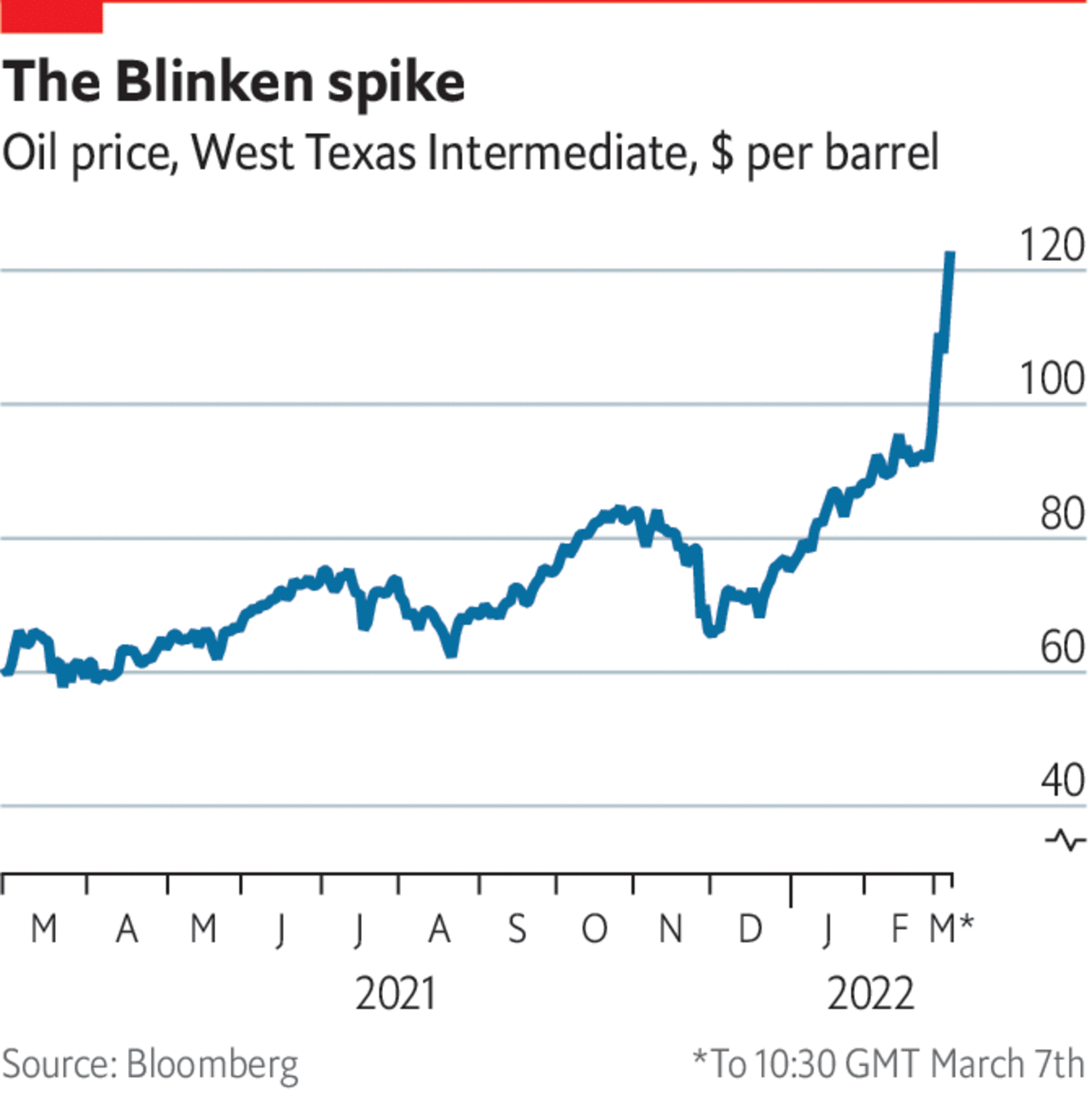 That, says Abhi Rajendran of Energy Intelligence, an industry publisher, means firms should be building inventories now but they are not. The snag is that oil supply has remained constrained as the result of under-investment and covid-related factors. The OPEC cartel has not been able to meet its own production quotas. Mr Rajendran reckons the market was undersupplied by some 1m barrels per day (bpd) before the war in Ukraine. That had pushed prices towards $100 a barrel.

The second reason for prices surging in response to Mr Blinken’s statement is the fact that Russia, with its 4.5m bpd of crude exports and additional 2.5m bpd of oil-product exports, is the world’s second-biggest exporter of petroleum. If all those exports were cut off, as the result of an American-led energy embargo or through Vladimir Putin using export curbs as an economic weapon, the world economy would be dealt a severe blow.

To soften it, the West has turned to buffer stocks. The IEA announced on March 1st that its member countries will co-ordinate the release of some 60m barrels of oil from their strategic reserves. The only times the IEA has previously done this were during the Iraq-Kuwait war in 1990, Hurricane Katrina in 2005 and the Libyan civil war in 2011. But Damien Courvalin of Goldman Sachs, a bank, argues that this one-off release of strategic stocks is “dwarfed by the potential magnitude of Russia’s export disruptions”. He reckons it would not offset the loss of Russian seaborne exports for long.

Moreover, no other supplier, nor any combination of them, could produce sufficient incremental volumes of oil quickly enough to replace the loss of all Russian exports. James West of Evercore, an investment bank, reckons that even mighty Saudi Arabia can manage at most an extra 1m bpd of production within a few months. Total OPEC spare capacity is not much more than 2m bpd. Oil output is growing in Canada, Brazil and Guyana, but even taken together their growth will be far less than 1m bpd this year.

That is why America’s energy diplomats are working overtime to find other sources of oil to make up for any Russian shortfall. One territory they are exploring is their own shale country. Top federal officials from several different cabinet ministries have landed at CERAWeek, hoping to woo American oilmen into cranking out more black gold. The petroleum lobby is not happy with the Biden administration, which it sees as climate-obsessed and vindictive towards fossil fuels, so these overtures are likely to prove awkward. What is more, American shale output is already set to expand by 1m bpd this year. Serious supply-chain stresses (one oilman complains that the price of sand, a vital component in the shale process, has tripled of late) stand in the way of doubling that—which could not happen in less than a year, in any case.

One development that would be helpful is a lifting of sanctions on Iran. That could potentially increase exports by around half a million bpd within six months and double that within a year. Last week it appeared as though a sanctions-easing deal between Iran, America and other world powers was close. However, it was dealt a setback by sudden demands by Russia for guarantees from America that any sanctions over Ukraine would not affect Russian trade with Iran. American negotiators are also reportedly negotiating now with Venezuela, another country with oil exports restricted by sanctions, but Mr Courvalin reckons this could produce only about half a million bpd in extra exports within a year.

The emergence of “self-sanctions” is the third reason energy traders are worried. Strikingly, Russian petroleum exports have become toxic even before America has imposed any overt ban on them. The sanctions imposed thus far on Russia have explicitly avoided targeting its energy sector, but Fatih Birol, head of the IEA, notes that this has not prevented them from curtailing its petroleum exports. “There is confusion in many parts of the world about whether buying Russian oil is affected by sanctions or not,” he says. As a result, many counterparties are steering clear of anything Russian.

That has sent Russian oil exports into a dive. David Fyfe of Argus, an energy publisher, reckons that some 2m bpd of Russian petroleum is “already off the market one way or another”. Western oil majors have come under intense pressure to limit their use of Russian crude and refined products. Even firms in China and India, normally relaxed about circumventing American sanctions, are avoiding doing business with Russian-owned, operated or flagged vessels or Russian ports. When news surfaced that Shell stood to make a $20m profit trading a discounted cargo of Russian crude after piously withdrawing from several joint ventures in the country, the firm suffered a backlash, prompting it to announce it would place any profits from Russian oil into a Ukraine aid fund.

A slippery predicament
The prospect of a Russian oil embargo poses a dilemma for America. On one hand, Western leaders want to punish Russia for its aggression without putting troops on the ground in Ukraine, and energy is the most powerful of the tools they have not yet used; Russia’s biggest remaining vulnerability is its massive energy exports. On the other hand, precisely because its exports are so big, cutting them off all at once would risk destabilising the world economy. The IMF warned on March 5th that the consequences of the war and the economic sanctions are already “very serious”, and if things escalate could become “more devastating”.

That is why Mr Blinken went on in his statement on March 6th to say that America would only impose a ban on Russian exports (with allies or, if necessary, on its own) if it can ensure that “there’s still an appropriate supply of oil on world markets.” Allies’ reluctance to join in may be understandable, given that America imports little Russian oil whereas Europe is Russia’s biggest customer: it imports 2.7m bpd of crude and 1m bpd of oil feedstocks and products from Russia, according to Richard Joswick of S&P Global Commodity Insights.

Is Mr Blinken serious? A “shock and awe” ban risks pushing America and Europe into recession. That may tempt them into another, less dramatic option. They could finesse things with graduated sanctions, as America did with Iran. Imposing energy sanctions that ratchet down Russia’s permitted exports every few months would give it an incentive to curb its bad behaviour. But the creative ambiguity and clumsiness involved in any attempt to finesse an embargo might lead to an oil shock all the same.