Why the Canon EOS 650 was the iPhone moment for cameras 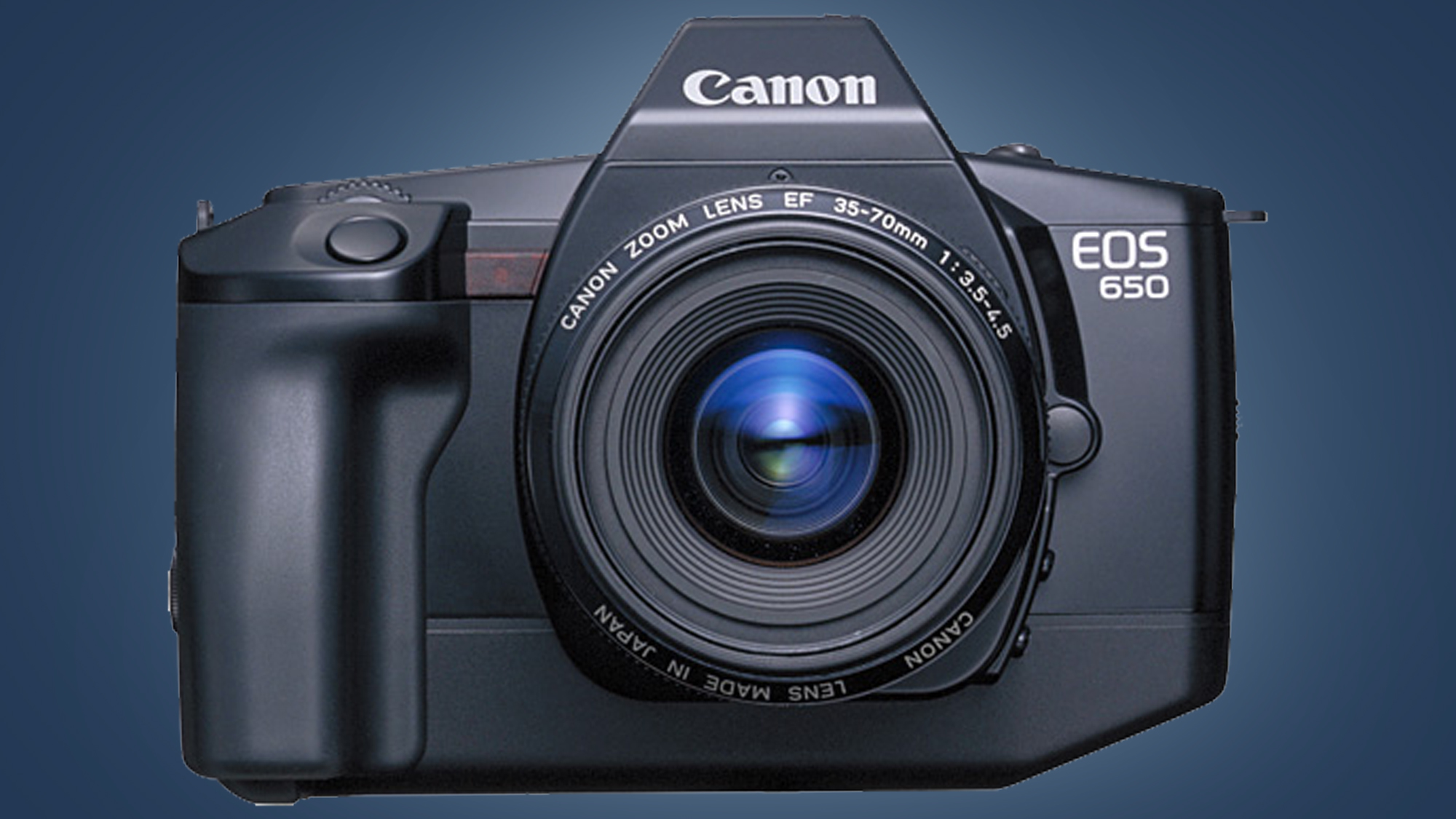 Thirty-five years ago today, the Canon EOS 650 arrived and changed the face of photography. It was Canon’s first ever EOS camera, and while it might not look like a relative of the iPhone, it has a surprising amount in common with Apple’s game-changer – it was a bold break from the past whose new twist on existing tech took its industry into a new era.

To really understand how important the EOS 650 was, we need to travel back to March 2, 1987. Interestingly, on the exact same day, Apple was preparing to reveal the Macintosh II, while later that year Nokia would introduce its first handheld phone, the Cityman 1320. But the camera world was also in the midst of a tech revolution.

Like phones and capacitive touchscreens in 2007, cameras in the mid-80s were dabbling with an exciting new tech called ‘autofocus’. Leica got the ball rolling in the late 1970s, but Minolta shocked the photography world by launching the first SLR with in-body autofocus (the 7000AF) in 1985.

That camera is the LG Prada phone in this story, though, because it’s a largely forgotten trailblazer. Just like Apple 20 years later, Canon sensed an opportunity to forge ahead – and it grabbed it, producing a camera system that’s the reason why it’s still on top of the photographic world today.

Canon did have autofocus cameras and lenses in the early 1980s, but the tech had hit a ceiling. As Canon developer Yasuo Suda explains, “before the EOS series was launched, our cameras featured the FD lens mount. However, a fully-electronic mount was essential in order to achieve a high level of AF technology”.

That meant one thing – dropping the mount that its existing SLR fans had bought lenses for, and creating a brand new one to take a leap ahead in autofocus. It would be a bold step, not least because autofocus wasn’t considered the holy grail by everyone. Nikon, the clear leader in pro cameras at the time, saw the tech as something of a gimmick for professionals, confident that most serious photographers would want to focus manually. 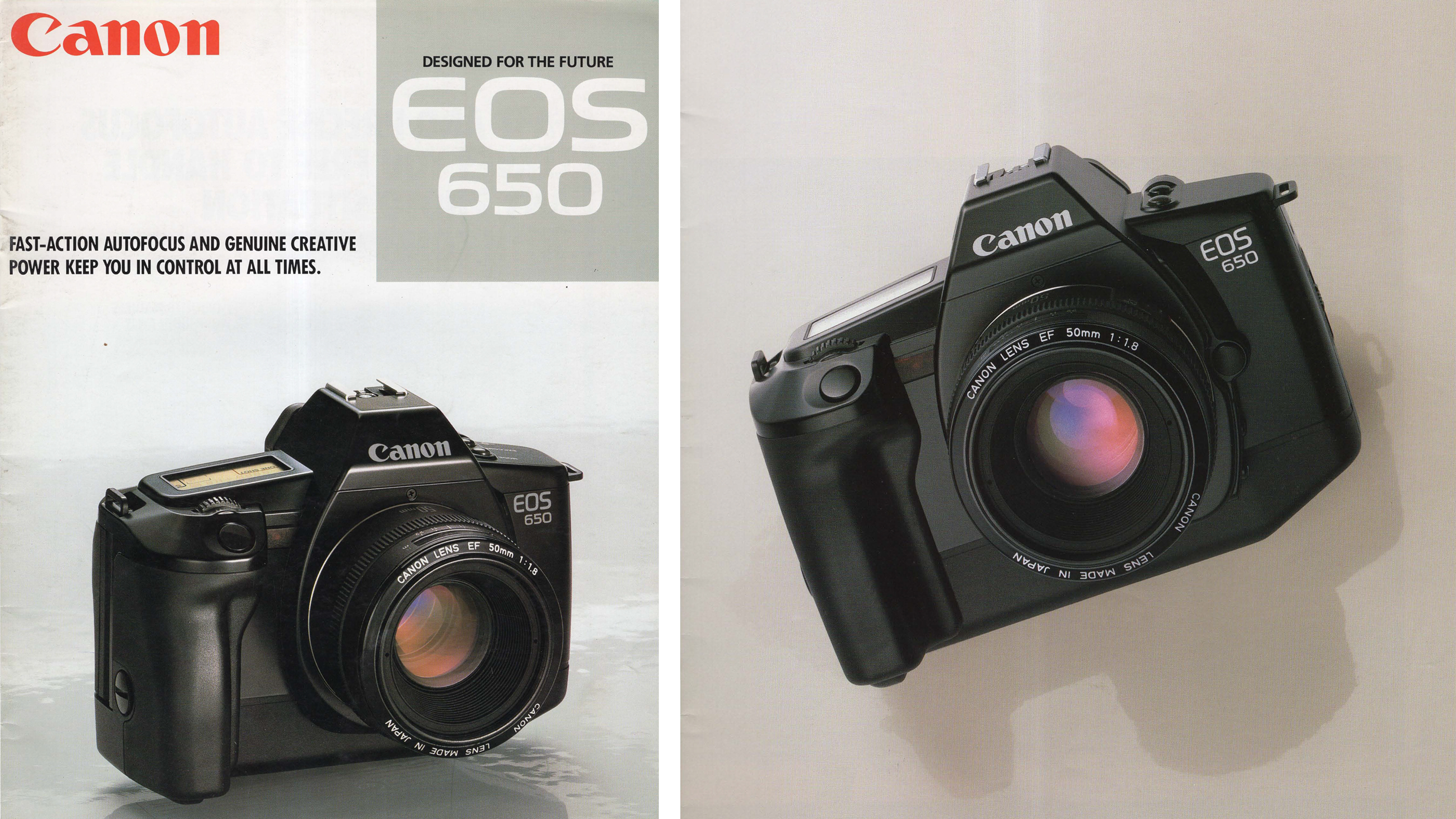 But Canon decided to take the plunge in 1985, and two years later its ‘Electro Optical System’ (or EOS) was born with an advanced amateur camera called the Canon EOS 650. It was a big deal for two reasons. Firstly, EOS was the first system to create a fully electronic connection between an SLR cameras and its lenses, which ultimately took autofocus beyond the slow, clunky experience of the time. And it also heralded the dawn of the EF-Mount, which is still in use on Canon’s DSLRs today – and uses exactly the same physical design.

Just like the original iPhone, the Canon EOS 650 was a futuristic-looking gadget built on a proprietary platform that’d set the tone in its field for decades to come. But it was also, similarly, far from the finished product when it launched in 1987.

What did people say about the Canon EOS 650 at the time? In a 1987 review titled “Camera; a new experience in simplicity”, the New York Times’ Andy Grunberg said that while “it took a few days to get relaxed with my high-tech companion”, he found that it performed “a remarkable number of feats without any intervention or input from the person holding it”.

He praised the single-point autofocus system, marveling that “all I needed to do was to press the button the rest of the way down and the picture was taken”, but was less impressed with the overly-sensitive shutter button. Still, the conclusion was that “using the Canon EOS 650 has improved my opinion of auto-focusing, electronic SLRs” and that “certain aspects of their whirring, blinking performance are actually fun”. 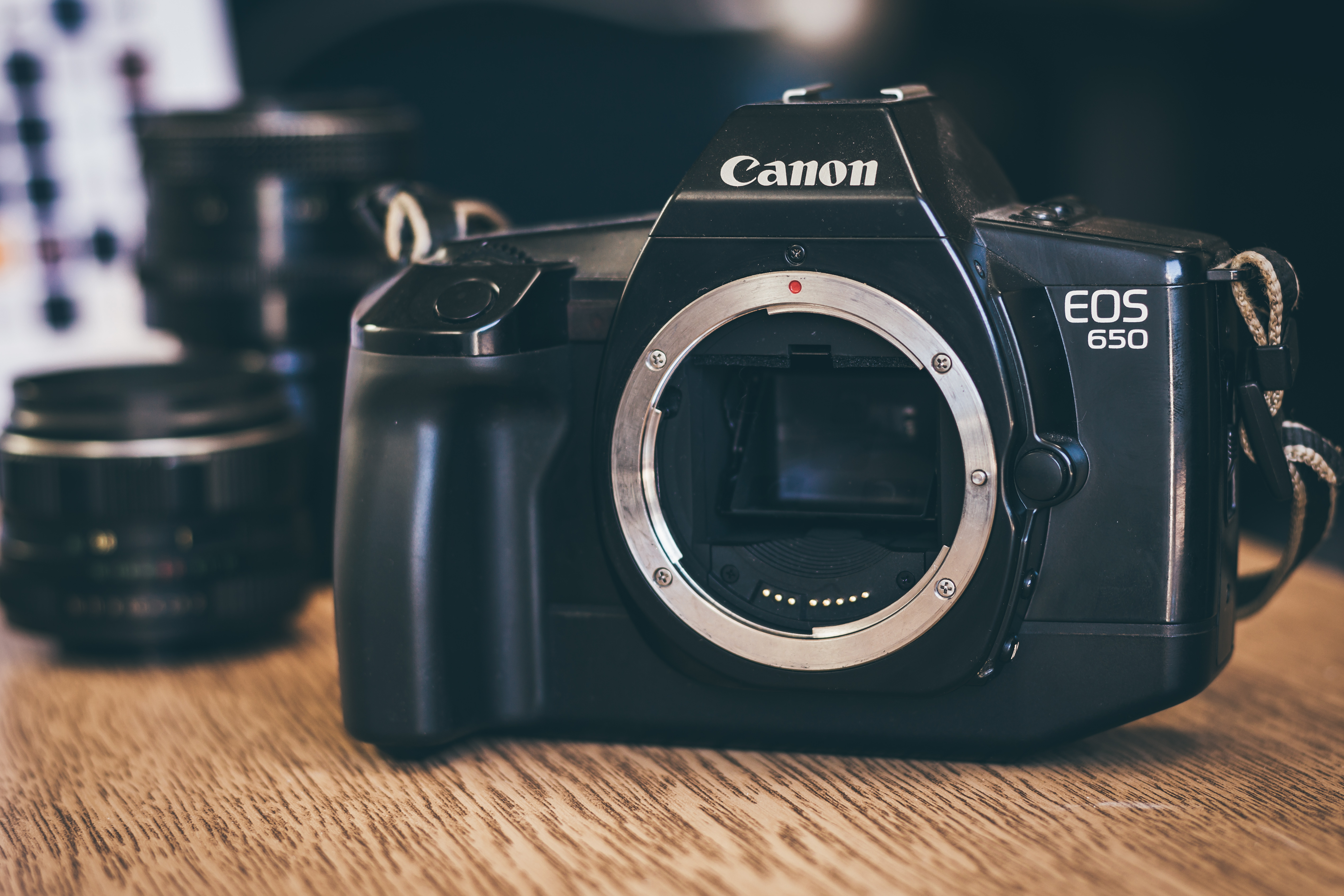 The Canon EOS 650 was the first camera with the EF mount, which would later become the most popular in the world. (Image credit: Marko Duca / Shutterstock)

While the EOS 650 was a film camera, it was the dawn of the modern, electronic shooting experience – one that became so widespread that using a Canon EOS 650 today is still pretty intuitive. But like the original iPhone (which didn’t have an App Store at launch), it was really the EOS 650’s successors that established Canon as the biggest name in photography. 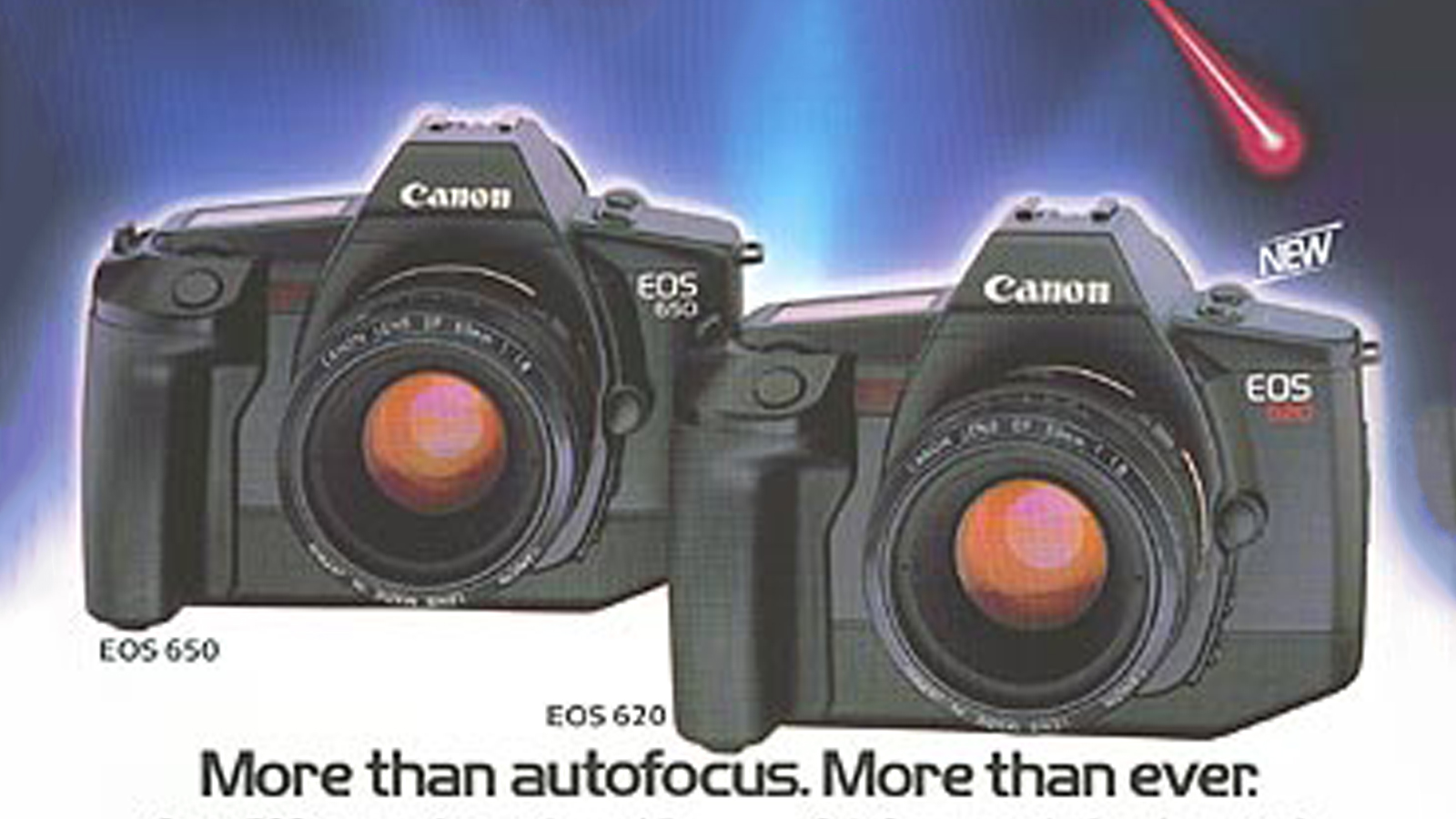 The first crucial USM (UltraSonic Motor) lenses only started to arrive from November 1987, with the EF 300mm f/2.8L USM. These importantly put a small, quiet autofocus motor inside the lens, rather than the camera. Steve Jobs exclaimed at the iPhone launch that Apple had “patented the hell out of it”, and Canon did the same with its new tech.

This led to genuine pro revolutionaries like the Canon EOS 1 and EOS 1N, which are regarded by many as two of the most influential cameras of the last half a century. So much so, we’re eagerly awaiting their spiritual mirrorless successor in the rumored Canon EOS R1.

What’s fascinating about the Canon EOS 650, in another parallel to smartphone cameras, is how it was advertised and marketed back in 1987.

The tagline of one US TV advert was “now you don’t have to be a pro to shoot like one”. Another said “one of these guys is a pro photographer, one’s a dentist – with the autofocus Canon EOS, it’s tough to tell them apart”. And the advert below introduces the EOS 650 as a new point-and-shoot king.

While that didn’t quite turn out to the case, the Canon EOS 650 certainly laid down a blueprint for a new, modern SLR camera. Like the earlier Canon T90, it removed buttons, stripped down the shooting experience and prioritized usability – sound familiar? Who’d have guessed that Apple, which in 1987 was struggling away with the Macintosh, would become one of Canon’s big point-and-shoot successors during the 2010s.

The EOS 650’s design, which is so painfully 80s it must share the same genes as Knightrider’s KITT car, perhaps explains why it’s often overlooked by those looking to pick up a film camera today. Classic, fully mechanical bodies like the original Olympus OM-1 tend to draw the eye of retro camera shoppers, but the EOS 650 remains well worthy of investigation – particularly if you already have EF lenses and don’t need the old-school, manual-only film experience.