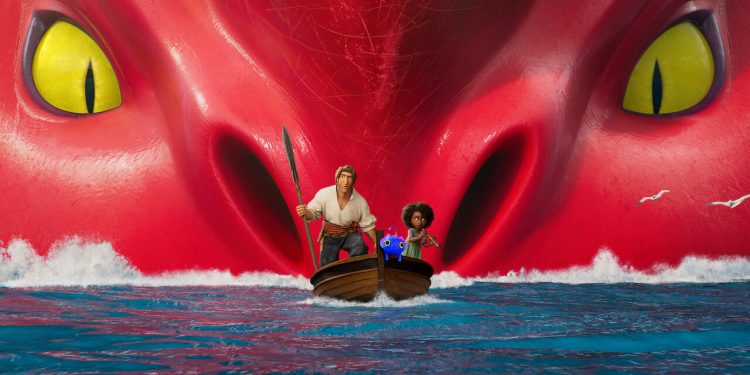 It’s been a mega few weeks for streaming services. In the past month alone, we’ve been treated to new seasons of Stranger Things, The Umbrella Academy, The Boys and Peaky Blinders (if you’re in the US, at least), shows that returned in tandem with the arrival of several new headline-grabbing series, like Obi-Wan Kenobi and Ms. Marvel on Disney Plus.

You may or may not be pleased to hear, then, that this week’s streaming picks are a refreshingly understated bunch. The big budget franchises, follow-up seasons and unnecessary spin-offs have been replaced by a handful of truly original productions, marking a welcome reprieve from the onslaught of Twitter-breaking content we’ve enjoyed (or endured) of late.

Below, we’ve rounded up seven new movies and TV shows available to stream on the likes of Netflix, Prime Video and HBO Max this weekend.

This week’s biggest arrival is The Sea Beast, a Netflix-produced animated adventure that proves Disney doesn’t have a monopoly on layered, kid-friendly storytelling.

Charming, action-packed and beautifully-rendered, the movie has been praised by audiences and critics alike, serving as proof that Netflix was wrong to scale back its animation department in response to recent subscriber losses.

The Apple TV Plus hype train continues this weekend with Black Bird, whose first two episodes are available to stream now.

This six-part psychological thriller – an adaptation of James Keene’s celebrated prison memoir, In With the Devil, by Mystic River screenwriter Dennis Lehane – stars Taron Edgerton as a convicted drug dealer tasked with soliciting a confession from an alleged serial killer in exchange for a reduced sentence. Greg Kinnear and Ray Liotta (in what proved to be his final TV role) also feature in the show’s cast.

Critics have been raving about this “exquisitely pitched true-crime series”, which looks perfect for fans of David Fincher-style dramas. Black Bird’s remaining four episodes are due to arrive in weekly instalments every Friday.

Now available to stream on Apple TV Plus.

In the mood for a new easy-to-watch sitcom? Maggie may be for you.

This 13-episode romantic comedy series stars Rebecca Rittenhouse (Once Upon a Time in Hollywood) as the titular Maggie, a talented psychic whose life is thrown into turmoil when she gets an unexpected (and surprising) glimpse of her own future relationship.

The show, which has so far received a lukewarm reception from critics, was originally ordered by ABC before being picked up by Hulu. Audiences outside of the US can stream Maggie in its entirety on Disney Plus.

Now available to stream on Hulu in the US and Disney Plus in the UK.

Save for new seasons of The Expanse and For All Mankind, it’s been a relatively quiet year for space-set sci-fi series. Enter AMC’s Moonhaven.

This six-episode show, set 100 years in the future, centers on a utopian lunar colony that may hold the key to the survival of life on a now-uninhabitable Earth. Moonhaven comes from Lodge 49 writer-producer Peter Ocko and stars The Lord of the Rings’ Dominic Monaghan, Spider-Man’s Joe Manganiello (remember Flash?) and newcomer Emma McDonald.

Critics seem to be in agreement over this “smart, surprisingly fun and sometimes overstuffed” show, which has earned plaudits for its stellar visuals and ambitious storytelling. Moonhaven’s first two episodes are available to stream now on AMC Plus, with the remaining four instalments due to land every Thursday. No UK release date has been set for the series as yet.

Now available to stream on AMC Plus in the US.

Having been released on UK network ITV back in January, Trigger Point now comes to Peacock for global audiences to enjoy.

Line of Duty and The Bodyguard creator Jed Mercurio serves as executive producer on the series, which was praised for being an “utterly preposterous blast” at the time of its UK premiere earlier this year. Expect twists, turns and plenty of explosions from this one.

Now available to stream on Peacock.

The first of two documentary picks in this week’s roundup, The Anarchists, is now streaming on HBO Max.

This six-part docuseries follows an eclectic group of anarchy-promoting activists – containing everyone from fugitives to crypto enthusiasts – who gather each year for a conference in Acapulco, Mexico. But when an attendee at the rule-free event is mysteriously murdered, the anarchists begin to realize that their safety is far from guaranteed.

HBO has a strong track record of producing stylish, eye-opening documentaries, and its latest true-but-hard-to-believe tale looks set to continue that trend. We’re yet to learn when The Anarchists will release in the UK, but we’d expect it to arrive on Sky and Now TV in the coming weeks.

Now available to stream on HBO Max from Sunday.

Warriors on the Field (Prime Video)

Sports documentary fans, this one’s for you.

Directed by award-winning Australian filmmaker Larissa Behrendt, Warriors on the Field shines a light on the deeply personal and poignant stories of three Indigenous Australian Football League (AFL) players – Michael O’Loughlin, Michael ‘Sonny’ Walters and Tarryn Thoma – and highlights the importance of Aboriginal Australia to the sport as a whole.

Even if you’re not familiar with Aussie rules football, this easily digestible documentary (it’s only 50 minutes long) is sure to get pulses racing – and it can’t be any worse than Prime Video’s recent Paul Pogba documentary.

Web3 projects have already lost billions to hackers this year