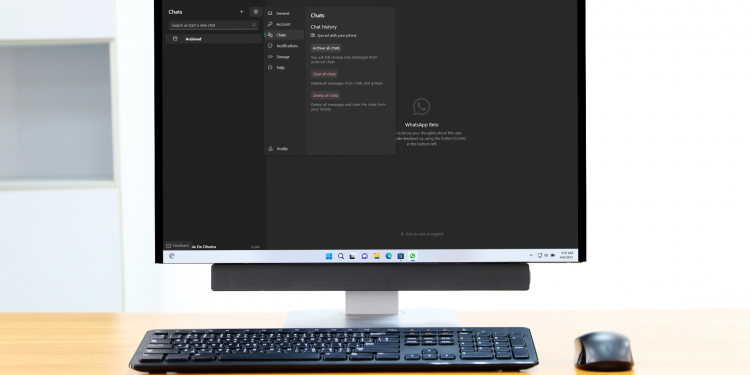 While 2021 brought the WhatsApp Desktop app to Windows 11, alongside a new look in January, there’s new features about to appear in the beta version.

The new update of the beta version, that’s been available on the Microsoft Store for Windows 10 and Windows 11 since November, showcases message reactions and the ability to permanently archive chats.

These are two features that users had been long-requesting, and while they arrived in the iOS and Android versions, they were yet to arrive for Windows 11, until recently.

However, with video calling in the desktop app, and GIFs having just arrived after the web version has had the ability for the last year, it makes us wonder if there’s any point in using WhatsApp in our web browsers anymore.

Analysis: Time to move on from WhatsApp Web

Using WhatsApp on the web on your PC or Mac has been the norm for years now. Using a tab in your web browser to quickly reply to messages, instead of reaching for your phone, is very useful.

However, there’s times when you can discover its limits, such as missing reactions and video calling.

This is where the desktop app has already superseded the web version on Windows and Mac. Calling your contacts through audio or video will be a big benefit to many, and while GIFS are already on the web version, they feel faster and display in a higher quality compared to how they show on the web browser.

It’s at the point where we’re already making sure that the app starts up alongside Steam, Chrome, and more when we switch on our PCs.

Reactions and the method to keep archived chats, archived, are only going to spur users to move away from the web version as well, and as far as we’re concerned, any way to reduce the tabs in our web browser is a benefit regardless to make them more manageable.