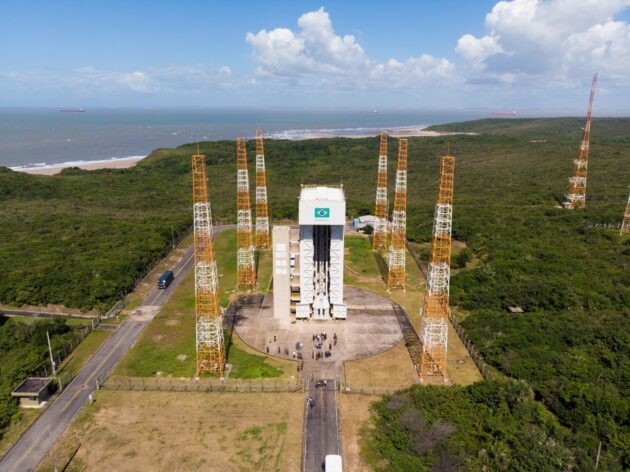 The statement of strategic intent and cooperation, signed by AWS and the space agency (known in Portuguese as the Agência Espacial Brasileira, or AEB), follows similar agreements that Amazon has made with Greece and Singapore.

But Brazil is a higher-profile case: Last year, Brazilian space and defense officials announced that Virgin Orbit would conduct orbital launches from the country’s Alcântara Space Center. Brazil is also a participant in the International Space Station program, and it has signed onto NASA’s Artemis Accords for moon exploration.

“The Brazilian government is on the hook to help provide capability for Artemis,” Peter Marquez, AWS’ head of space policy, told GeekWire. “We would love to help in those traditional areas, but in addition to that, the journey of getting to the moon, as well as building up other capabilities in Brazil, presents the opportunity to further grow the Brazilian space community commercially.”

AWS will offer space industry stakeholders access to data-processing credits, technical training and business support through a program called the Brazil/AWS Space Collaboration for the Economy and Development, or B/ASCEnD, Another initiative will create a centralized repository for space data. The third initiative will bring together representatives from AWS and Brazil’s space agency to discuss policy and regulatory strategies in support of Brazil’s space goals. 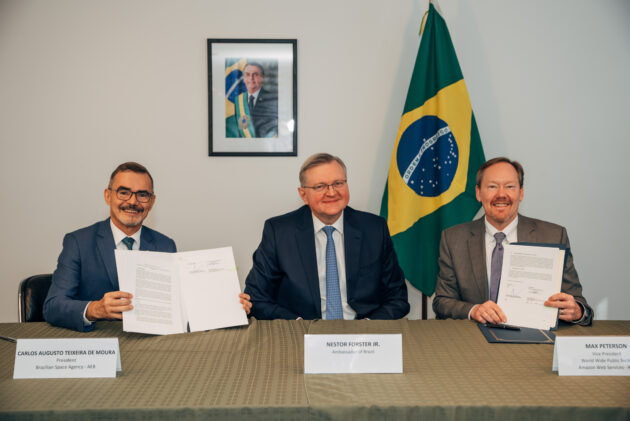 Marquez said education is a big part of the partnership: “We are committed to providing education to students, education to people in industry, education for the government on how you use AWS tools — in general, the capabilities that cloud compute and storage and AI and ML [machine learning] and all those things provide,” he said.

Brazil’s ambassador to the U.S., Nestor Forster Jr., said in a blog posting that the initiatives will bring about “greater integration of the Brazilian private sector and our aerospace industry with the American innovation ecosystem, the most advanced in the world in the space area.”

Carlos Augusto Texeira de Moura, president of the Brazilian Space Agency, called the agreement with AWS “an important step towards promoting our space industry, at a time when Brazil aims to enter more strongly in the space market, such as, for example, in the space access segment, with the Alcântara spaceport.”

As far as AWS is concerned, Marquez essentially said the sky’s the limit.

“There’s software and hardware that the government needs,” he said. “And as you’ve heard many times before, Amazon as a whole is customer-obsessed. So if the Brazilian government needs support in those areas, whether it be ground station capabilities or support to develop a launch program, those are things that we will talk to them about, and pursue those opportunities. We are at the very beginning phases of this.”