How much would they hurt? 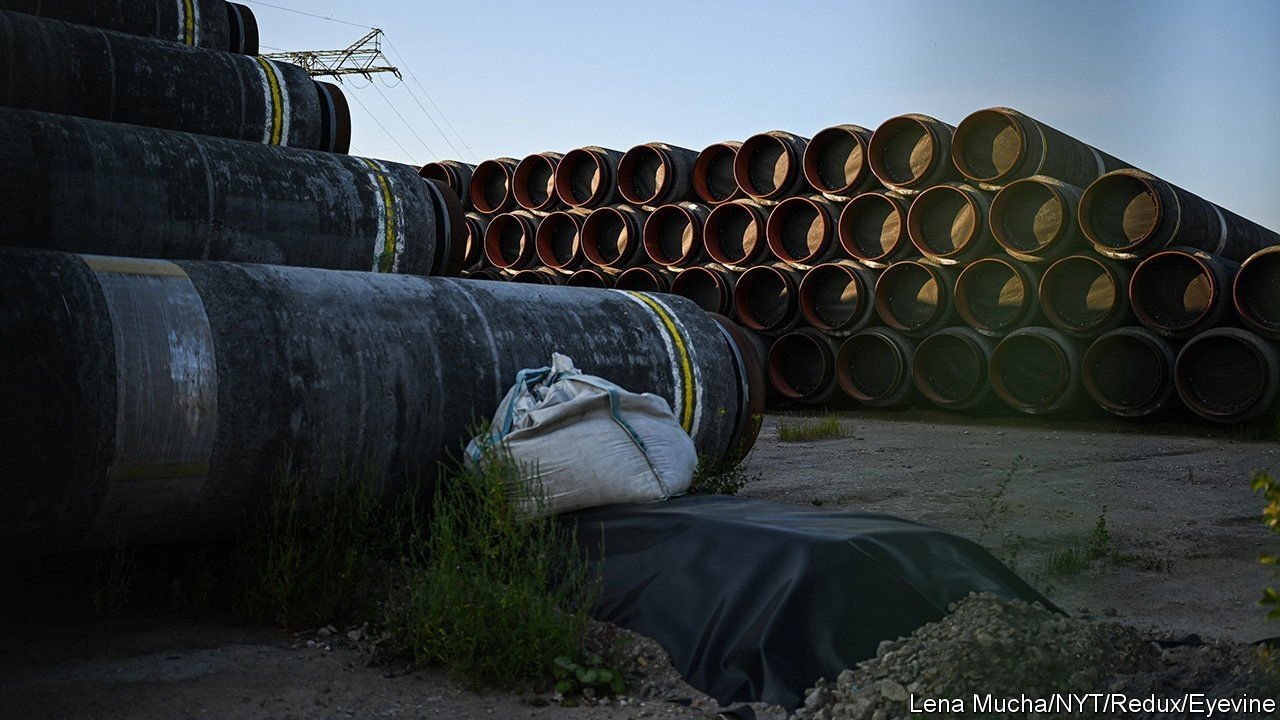 HAVING ALL but ruled out engaging militarily with Russia, directly at least, were it to invade Ukraine, the West’s main weapons are economic. This week America and Britain vowed measures on a scale that has never been seen before. “The mother of all sanctions”, was how Bob Menendez, chairman of the US Senate’s foreign-relations committee, described the package assembled by the chamber. President Joe Biden says Vladimir Putin, his Russian counterpart, has “never seen sanctions like the ones I promised”. For sanctions to work, though, Western allies will need to show unity, and be willing to shoulder economic pain themselves. History suggests that this may be their greatest challenge.

The expectation is that America’s Senate will approve its package in the coming days, after Mr Menendez said at the weekend that negotiators were “on the one-yard line”. He and colleagues say some of the sanctions being drafted could be implemented before any invasion, in response to activities Russia has already undertaken, such as cyber-attacks and “false flag” operations designed to destabilise Ukraine from within.

According to American officials, the administration’s sanctions would target figures and companies in or close to Mr Putin’s inner circle as well as the relatives they sometimes use as proxies for owning assets—though the officials have declined to name any. This group is said to be wider, and closer to Mr Putin, than that targeted after Russia annexed Crimea in 2014. The aim would be to cut targets off from the international financial system and go after money they have parked in the West, greatly complicating their business dealings.

Britain is working most closely with America. On January 31st its foreign secretary, Liz Truss, officially announced a new sanctions law, which she hopes to have in place by February 10th. The goal is to widen the group of oligarchs and other Putin cronies who can be penalised. Since 2015 Britian has sanctioned 180 Russian individuals and 48 entities, mostly for interfering in Ukraine after the annexation. The new lot, Ms Truss promised, can be slapped on anyone “providing strategic support” to Mr Putin’s regime. Not naming potential targets was, she said, designed to maximise unease among the president’s backers.

Britain’s stance is closely watched because rich Russians have strong financial and social ties to the country, owning mansions and football clubs and sending their children to the country’s elite schools. London is a key capital-raising centre for oligarchs and their companies. A spokesman for Mr Putin suggested that Ms Truss’s announcement “demonstrate[s] London’s great unpredictability” and would undermine its “investment attractiveness”.

The measures against Russia’s economic upper class are expected to form part of a broader package of sanctions and export controls focused on finance, energy and technology, should conflict erupt. America is looking at targeting big Russian state-linked banks, including Sberbank, a savings giant, and the development bank VEB, which Mr Putin has used to finance some of his favourite projects. The Biden administration also wants to keep open the option, resisted by some European countries, of excluding Russian banks from SWIFT, the interbank messaging system used to make cross-border transfers. Restrictions on the secondary trading of Russian sovereign debt are on the table, too.

In energy, the talk in Washington is of broadening sanctions to target not just production but investment, too. One way would be to restrict capital-raising by Russian oil-and-gas giants in centres like New York and London. America has also threatened to prevent the opening of Nord Stream 2, a new pipeline that would send Russian gas to western Europe.

Technology is arguably America’s most powerful lever. It has already restricted exports of various cutting-edge technologies and devices that fall under the State Department’s “munitions list”, which covers the arms trade. It could go further and block more exports of high-tech gear on the Commerce Department’s “entity list”. This would restrict Russia’s access not only to microchips and other items used by its defence and aviation sectors, but also to parts used in many phones and appliances, inconveniencing Russia’s consumers as much as its weapons-makers.

The last economy of any size to be hit with broad sanctions was Iran, which was targeted by America and its allies with “maximum-pressure” sanctions in 2018 over its nuclear programme. Punishing Russia poses a far more daunting challenge, because its economy is more internationally connected than the Islamic Republic’s. For sanctions to be effective, they will have to cause pain to the West itself.

The most obvious blowback would be in energy. Europe relies on Russia for more than a third of its imported natural gas. America and some of its European allies are reportedly talking to Qatar and other suppliers of liquefied natural gas about how they can help make up any shortfall, should Russia cut supplies. Some large European lenders also have close ties to Russia. Among the most exposed are Société Générale of France, UniCredit of Italy and Raiffeisen of Austria. The European Central Bank has reportedly asked the most heavily exposed of the 115 large euro-zone banks it supervises to provide details of how they would navigate various sanctions scenarios.

Another concern is “asymmetric” retaliation from Russia, namely cyber-attacks. Cyber-experts in the American government recently warned those tasked with defending the country’s critical infrastructure, from energy networks to water-supply and transport systems, to “adopt a heightened state of awareness” against Russian state-sponsored attacks.

These risks leave some of America’s European allies feeling queasy. Germany has closer economic ties to Russia than any other Western power, and therefore more to lose from tough penalties. It gets over half of its imported gas from Russia and has wobbled on sanctioning Nord Stream 2 (though many think it will end up agreeing to do so). It is also cool on the idea of cutting Russia out of SWIFT.

Even Britain’s commitment is uncertain. Its governments have a history of failing to match rhetoric with action when it comes to financial sanctions and curbing dirty money. Campaigners have called on it for years to use its leverage as a major financial centre more effectively. Its Crimea-related sanctions of 2014-15 contained scant restrictions on Russian firms and tycoons raising capital through London-based banks and markets. And it declined to follow America’s lead in sanctioning some of the most powerful commercial and financial figures in Mr Putin’s circle, such as Igor Sechin, the CEO of Rosneft, a Russian oil-and-gas firm.

The other big question is how much even severe sanctions would hurt the Russian economy. Mr Putin’s officials have gone to great lengths to sanction-proof it. Central-bank reserves have been beefed up to more than $600bn; the share in dollars has fallen steadily in recent years, to 16%. Only a fifth of Russia’s sovereign bonds are held by foreigners, following a drive to domesticate ownership. The National Wealth Fund, which collects surplus oil and gas revenue, has been squirrelling away money and now holds around $180bn, more than double what it had five years ago.

Nevertheless, insulating the economy fully is impossible. Russian officials have boasted of riding out the Crimea-related sanctions relatively comfortably. Yet a study by Anders Aslund and Maria Snegovaya of the Atlantic Council suggests the sanctions may have taken more than 2.5 percentage points off average annual Russian GDP growth since they were imposed. The sanctions Mr Biden is contemplating could therefore cause intense pain, if he can get his allies on board.

All of our recent coverage of the Ukraine crisis can be found here.

The reasons behind the stockmarket turmoil