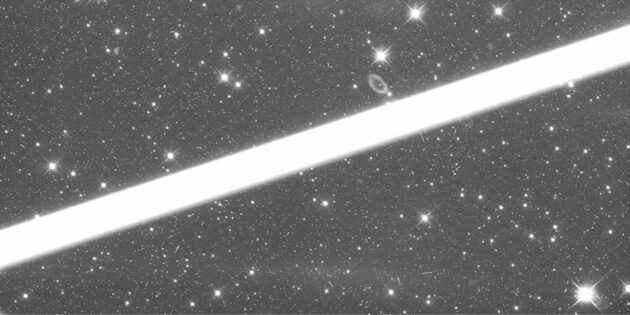 Astronomers say this streak in a Hubble Space Telescope image is likely to have been created by a Starlink satellite flying just a few miles above Hubble. (MAST Image via Nature Astronomy / Simon Porter)

Astronomers have issued an Earth Day call for environmentalism to be extended more fully to the final frontier, and for companies such as SpaceX and Amazon to dial back their plans for mega-constellations.

Among the authors of today’s commentary in the journal Nature Astronomy is Meredith Rawls of the University of Washington.

Astronomers have been raising concerns about the impact of having thousands of satellites in low Earth orbit for years, starting with SpaceX’s launch of the first operational satellites for its Starlink broadband constellation in 2019. Rawls and the other authors of today’s commentary stress that they aren’t just worried about interference with their astronomical observations, but are also concerned about the broader impact on appreciation of the night sky.

“We need all hands on deck to address the rapidly changing satellite situation if we can hope to co-create a future with dark and quiet skies for everyone,” Rawls, a research scientist with the Vera C. Rubin Observatory and UW’s DIRAC Institute, said in a news release.

“Rubin Observatory will be one of the most severely impacted astronomy facilities by large numbers of bright satellites due to its large mirror and wide field of view — the same characteristics that make it such a remarkable engine for discovery,” Rawls said. “I care a lot about how satellite streaks affect science, but the case for dark and quiet skies is much larger than that.”

The commentary cites other threats to the space environment, ranging from on-orbit collision threats and orbital debris to the pollution caused by rocket launches. But it focuses primarily on projects including Starlink and Amazon’s Project Kuiper, which aim to put thousands of satellites into low Earth orbit, or LEO, to provide global broadband internet access from above.

Starlink and Project Kuiper are both headquartered in Redmond, Wash. SpaceX is building scores of satellites per month and is already offering limited internet service. Just this wee, JSX, a Texas-based “hop-on” airline, said it would use Starlink for its in-flight Wi-Fi. Project Kuiper, meanwhile, is still under development.

Previously: Radio astronomers look to the future as satellite mega-constellations light up the sky

Lots of other companies — including OneWeb, Telesat and Boeing — have their own plans for broadband satellite constellations. If all those plans pan out, there could be tens of thousands of satellites spinning through the skies within a decade. For the purposes of their commentary, the authors of the Nature Astronomy commentary assume 100,000 satellites will be orbiting at altitudes in the range of 600 kilometers (373 miles) by 2030.

SpaceX and other companies have been working with astronomers on ways to minimize the impact of their satellites on night sky observations, but the authors of today’s commentary say that’s not enough. “None of these mitigations can fully avoid LEO satellite constellations harming astronomical science; launching significantly fewer satellites is the only mitigation that could do this,” they write.

Among the researchers’ recommendations:

Can’t get a Ryzen 7 5800X3D? The Alienware Aurora Ryzen Edition has you covered

The incubator state: Xi Jinping’s bold plan for China’s next phase of innovation

Globalisation and autocracy are awkwardly locked together. For how much longer?