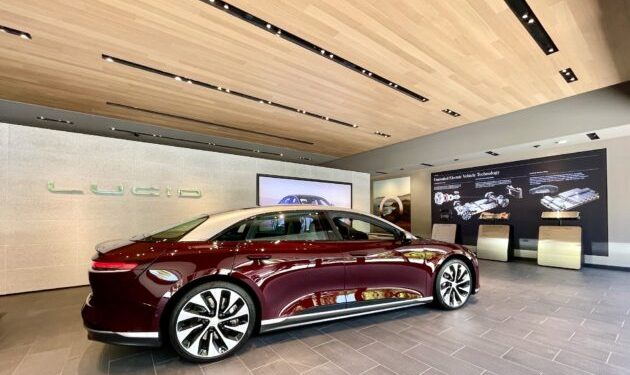 If $6-a-gallon gas has got you down, maybe you’re considering joining the rush of drivers making the switch to electric vehicles. A new showroom opening Saturday in Seattle’s University Village will show what you can get for $154,000.

If you don’t blink twice at that price tag, maybe $6 gas isn’t really your problem. Silicon Valley-based Lucid is making that money’s-not-an-object bet with a slick new space to tout its Air Grand Touring luxury sedan.

Lucid has been building out its showroom for more than a year in what used to be a Microsoft Store at the high-end mall. On Thursday, GeekWire got a preview of the space, a virtual reality car experience, and a real live test drive.

The location is the 28th for the company, which also has a service and delivery center on Airport Way South in Seattle.

“In Seattle there’s a very high adoption rate of EVs, but also there’s a really strong focus here on technology,” said Dave Buchko, the company’s PR manager, explaining the attraction to the market. “We see ourselves as a technology company as much as car company.”

Located about 20 feet from an Apple Store, the Lucid space borrows heavily from the minimalist design of the tech giant’s retail locations. There are two cars in the showroom; a display which shows off its electric technology (motor, charger, battery); a display for interior finishes and fabrics; small models for exterior color options; a two-seat virtual reality experience for seeing the car in different settings; and lounge areas.

“Since we’ll never have a lot full of cars for folks to walk around, part of the exploration here is the ability to see different material and finishes, interior options, exterior colors. This is an opportunity for folks to see it, touch it, feel it.” Buchko said.

Because Lucid is not licensed to sell cars in Washington state, the point of the studio is to educate potential buyers about the brand, the models and the options. Direct-to-consumer sales — and all talk of pricing — is facilitated via the company’s Newark, Calif., headquarters and delivery happens at the facility south of downtown Seattle.

Lucid, founded in 2007 as battery maker Atieva, bills itself as “the quickest, longest range, fastest charging electric car in the world.” The Air GT boasts a range of 520 miles per charge with an approximate charging time of 20 minutes to reach 300 miles.

The company, which is led by CEO Peter Rawlinson, a former top engineer at Tesla, went public last year, raising $4.5 billion in a SPAC deal.

It’s going up against a heavily entrenched Tesla, which has no shortage of its vehicles on the road in the Seattle region — and a showroom of its own just across University Village.

“We’re playing a long game here,” Buchko said. “Obviously, Tesla took a decade to get to where they are today. We’re just starting out. We’re ramping up slowly, we’ll expand the model range.”

The VR experience is part of a partnership with ZeroLight, designed to “reflect the needs of the evolving luxury buyer,” according to a 2020 news release. Standing in the showroom wearing a Vive headset, I was suddenly standing on the San Francisco waterfront with a stunning view of the Golden Gate Bridge. I watched as a Lucid car pulled up alongside me.

Chad Flores, a studio advisor visiting from the company’s San Jose location, guided me around the car and changed the visuals with a tablet he controlled, showing me the car in different colors. He opened the doors and told me to get in and I took a seat in a “cockpit” with a steering wheel. Holding the wheel felt like sitting in a real car as Flores adjusted the lighting themes, trim packages and more.

After my experience ended down the coast in Monterey, Flores said the objective was to change the car buying experience for the 21st century.

Across the showroom I revisited actual reality and sat in a real Lucid vehicle. Flores sat in the passenger seat and showed off the car’s control system while regional sales manager Stacy Paoa took a seat in the back.

The Lucid design and finishes are very much influenced by the natural landscapes of California. (GeekWire Photo / Kurt Schlosser)

Flores called up a massage setting on the dashboard screen and cycled through the options: rolling, unwind, wave, stretch and deep.

“It gives you a 20-minute timer so you don’t get too comfortable while you’re driving,” Flores said as the seat undulated beneath my back and rear.

The cars will also come with the option to have Amazon’s Alexa do the cycling through various controls with voice integration.

Determined to test whether I’d actually fall asleep during a 20-minute massage drive, I took a test drive in the Air GT on the streets surrounding the mall.

On a (finally) sunny afternoon in Seattle, the car’s massive windshield and glass roof provided an exceptional way to take in the blue-sky day. The car’s controls were easy to use and cycle through and an impressive array of cameras and LiDAR tech on the vehicle provided more views than I could possibly use.

The view from the back seat of a Lucid Air during a test ride in Seattle. (GeekWire Photo / Kurt Schlosser)

Acceleration was impressive, even in short bursts on city streets where the speed limit was 30 mph. The car goes 0 to 60 in 2.5 seconds, but it would take a drive far from the University District to test the top speed of 164 mph. The car felt quiet and sturdy and handled like a luxury sedan.

Lucid’s interior designs are each inspired by a time of day in a particular California location, such as a Mojave blackish grey package modeled after the desert at night. Sustainable interior materials include vegan leather, alpaca cloth that is blended with threads made from recycled plastic bottles, and wood finishes from groves of trees dedicated to automotive materials.

The cars are made at a production facility in Casa Grande, Ariz., which is targeting 12,000 to 14,000 deliveries this year. Eventually the auto plant will have a capacity of 365,000 cars a year, Buchko said.

“It shows that we have ambitions to be a significant player in the EV space, but we recognize it’s gonna take some time,” he added. Production challenges due to supply chain issues were noted in a recent Business Insider story.

The U. Village studio will employ about 15 people, and another five will work at the service and delivery facility. Hours at the studio are 10 a.m. to 8 p.m. Monday through Saturday and 11 to 6 on Sunday.