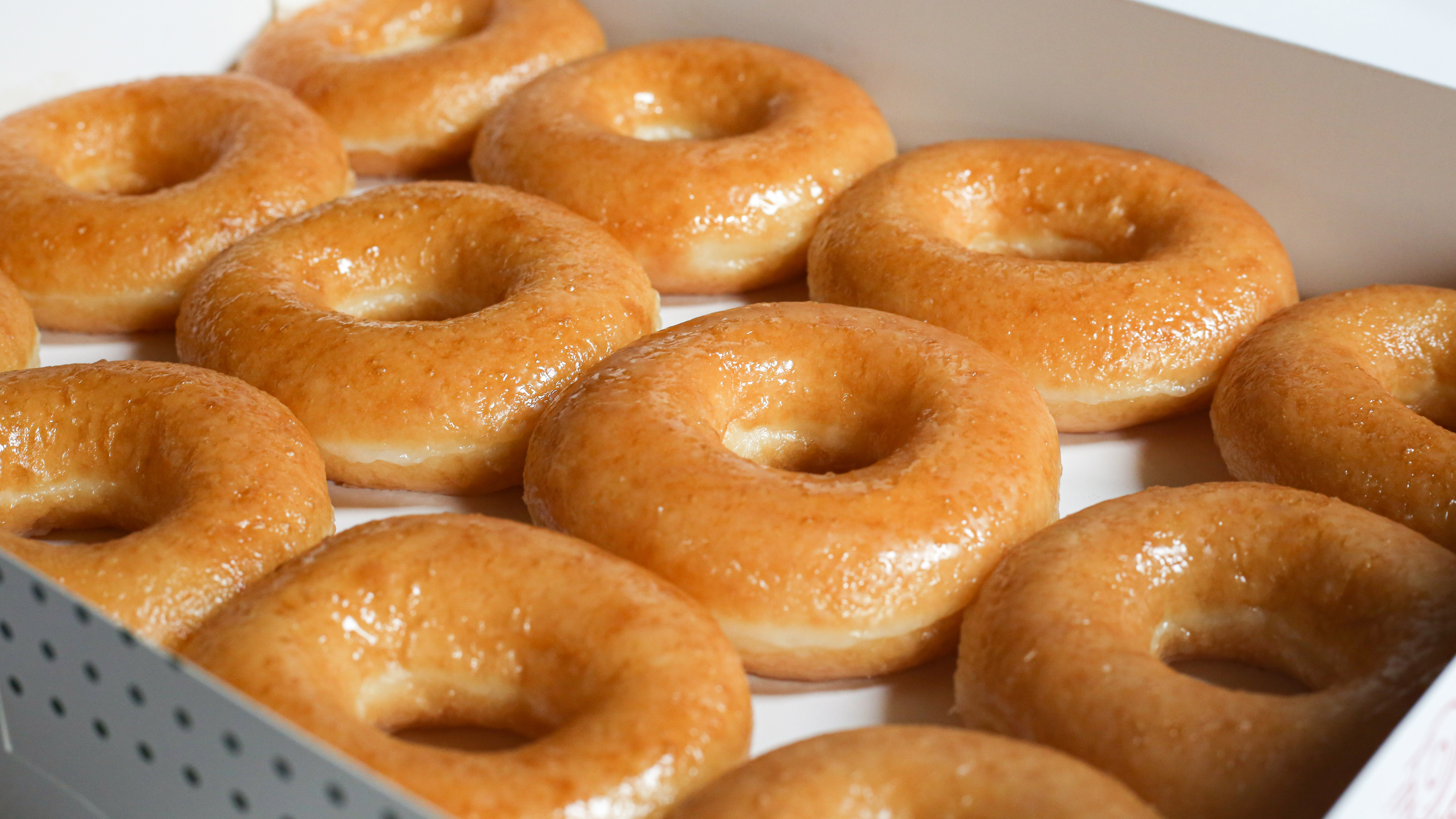 Fries and chicken wings are the first treats that spring to mind when you think of deep-fried foods. But what about donuts? For me, Homer Simpson’s favorite food is one of the most delicious treats you can indulge in.

Whether you prefer Krispy Kreme, Dunkin’ Donuts, or another bakery’s offering, the problem with these sweet bread-based snacks that are made with enriched dough (which contains fat and egg), is that they are fried in gallons of oil. Not only does that make them unsuitable for anyone trying to reduce their calorie intake, it also leaves the strong aroma of deep-fried food in your kitchen.

I’ve made baked donuts in the past, in a bid to create a healthier version of these snacks I love so much, but an oven can never achieve the perfect combination of an evenly browned shell and a pillowy-soft centre.

So I got to thinking: if air fryers can produce crisp, crunchy fries without the level of oil usually required when deep-frying – can they be used to create a healthier alternative to donuts at home without leaving your property smelling like a fish and chip shop?

Read on to discover what happened when we attempted to make Krispy Kreme style donuts in an air fryer – or, if you’ve already decided you want to invest in this handy kitchen appliance, check out the best prices on the best air fryers we like right now:

When it comes to recipes for bread-based snacks, I’m a big fan of the recipes from the Great British Baking Show (or The Great British Bake-Off as it’s known to those in the UK) judge Paul Hollywood. A baker since his teens, many of his recipes are featured as the show’s Technical Challenge each week, including this recipe for ring donuts.

While I’m sure Hollywood’s glaze of powdered sugar and lemon juice creates a zingy finish that complements the donuts perfectly, I prefer the creamy topping of Krispy Kreme’s original glazed donuts.

The brand has never published the exact recipe for its glaze, but I found this copycat version from Baking Mad tasted very similar and opted to finish my donuts with this instead.

I combined the dough ingredients, and then kneaded the dough until it was smooth and elastic. You can do this by hand, which will take around ten minutes, although I opted to use my KitchenAid stand mixer with the dough hook attached to give my arms a break.

I tipped the kneaded dough into a clean bowl that had been lightly oiled (to stop the dough sticking), covered it with a damp kitchen cloth, and left it to proof in a warm room for two hours. Then I rolled the dough out on a lightly floured surface to about ½ inch / 1cm thick and used a donut cutter to stamp out  3.5-inch / 8.89 cm wide discs with a 1.2-inch /  3 cm hole in the center.

A donut cutter is simply two dough cutters, one of which creates the main shape of the donut and marks the center so you can use the second cutter to make the hole. However, if you don’t have a donut cutter you can just use two circular cookie cutters, although it will be more time-consuming ensuring the hole is in the center of the donut.

I then placed the donuts on an oiled tray and covered them loosely with plastic wrap and returned them to the warm room to proof again. After that, there was nothing left to do than get cooking. 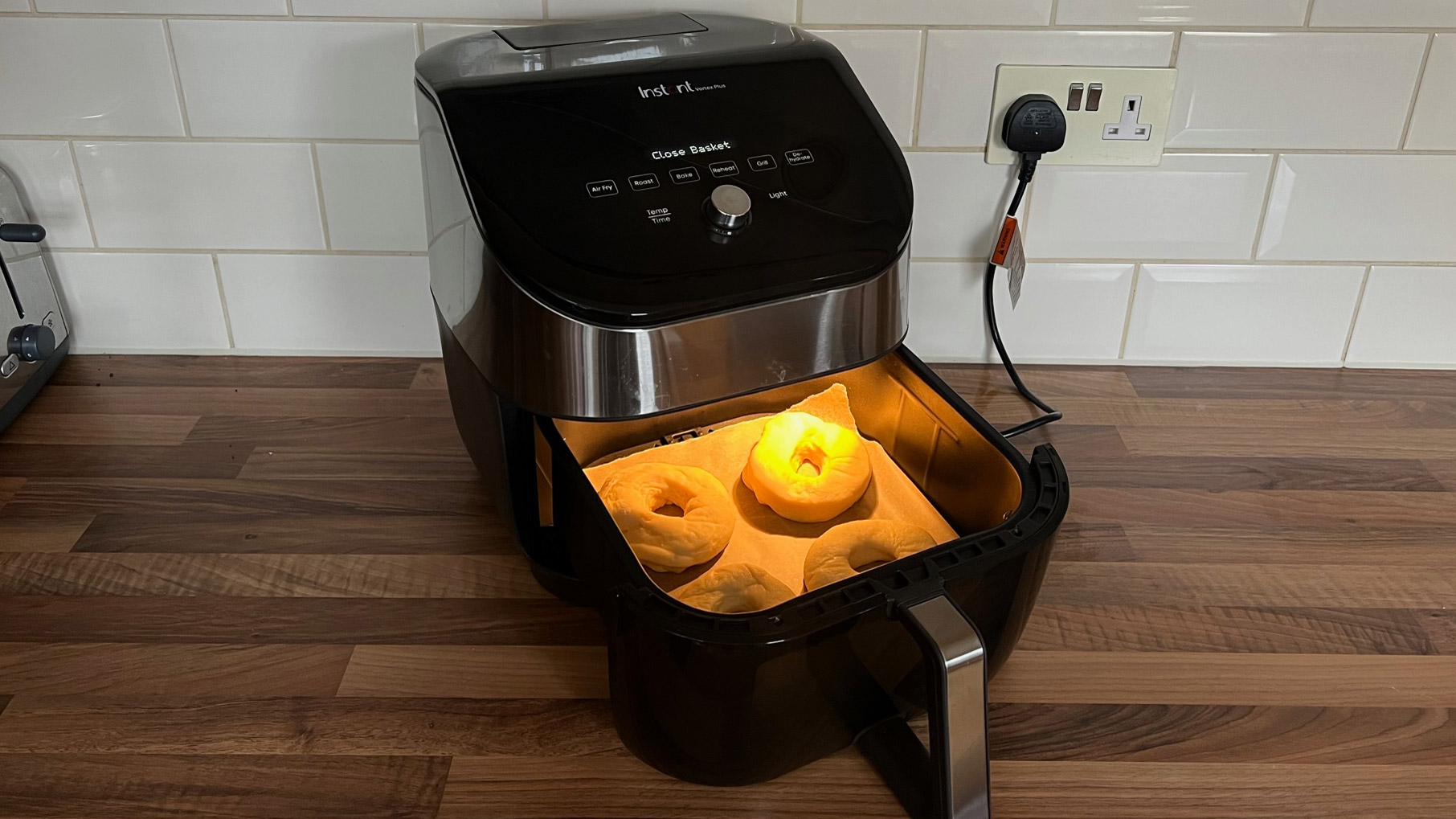 While I’ve plenty of experience of cooking in the appliance – I’ve previously discovered an air fryer is the secret to crisp, crunchy skin when cooking pork belly and that French Toast in an air fryer is far easier than on a stove, I was unsure what temperature and cooking duration to use.

As I’ve mentioned, I’ve attempted baked donuts in the past, but they require a cake batter rather than a dough, so that experience wasn’t useful here. Instead, I turned to the internet and did some research on air fryer donut recipes – I settled on a cooking temperature of 374 F / 190 C degrees and a duration of six minutes.

I dialled in the temperature and cooking duration on the Instant Vortex Plus air fryer (currently our top-rated air fryer), which saw the appliance preheat for three minutes before alerting me it had reached the required temperature. As the dough was a little sticky, I placed four donuts (all that would comfortably fit in the frying basket) on a sheet of greaseproof paper the same size as the air fryer’s crisper plate to stop them sticking. I then added this to the air fryer and cooking commenced.

Part way through cooking the air fryer alerted me that it’s time to turn the contents of the basket, so the hot air can reach every inch of the food to ensure a crisp finish. As I wanted a crisp, evenly browned finish on both sides of the donuts, I opened the air fryer drawer and turned the donuts over, before closing it and letting the cooking continue.

Once I got to the end of the cooking time, I opened the air fryer drawer and the donuts had clearly risen. The grease proof paper I used on the bottom to prevent the donuts from sticking to the crisper plate meant the bottoms (which were now the tops as I’d flipped the donuts part way through cooking) weren’t as browned as I’d have hoped. However the sides that had originally been facing upwards when cooking started were a deep brown color.

I removed the donuts and cut into one. While the middle was pillowy soft, the crust was extremely crisp, and that’s not something traditional associated with the indulgent treat. So I decided to rethink the cooking temperature and time. 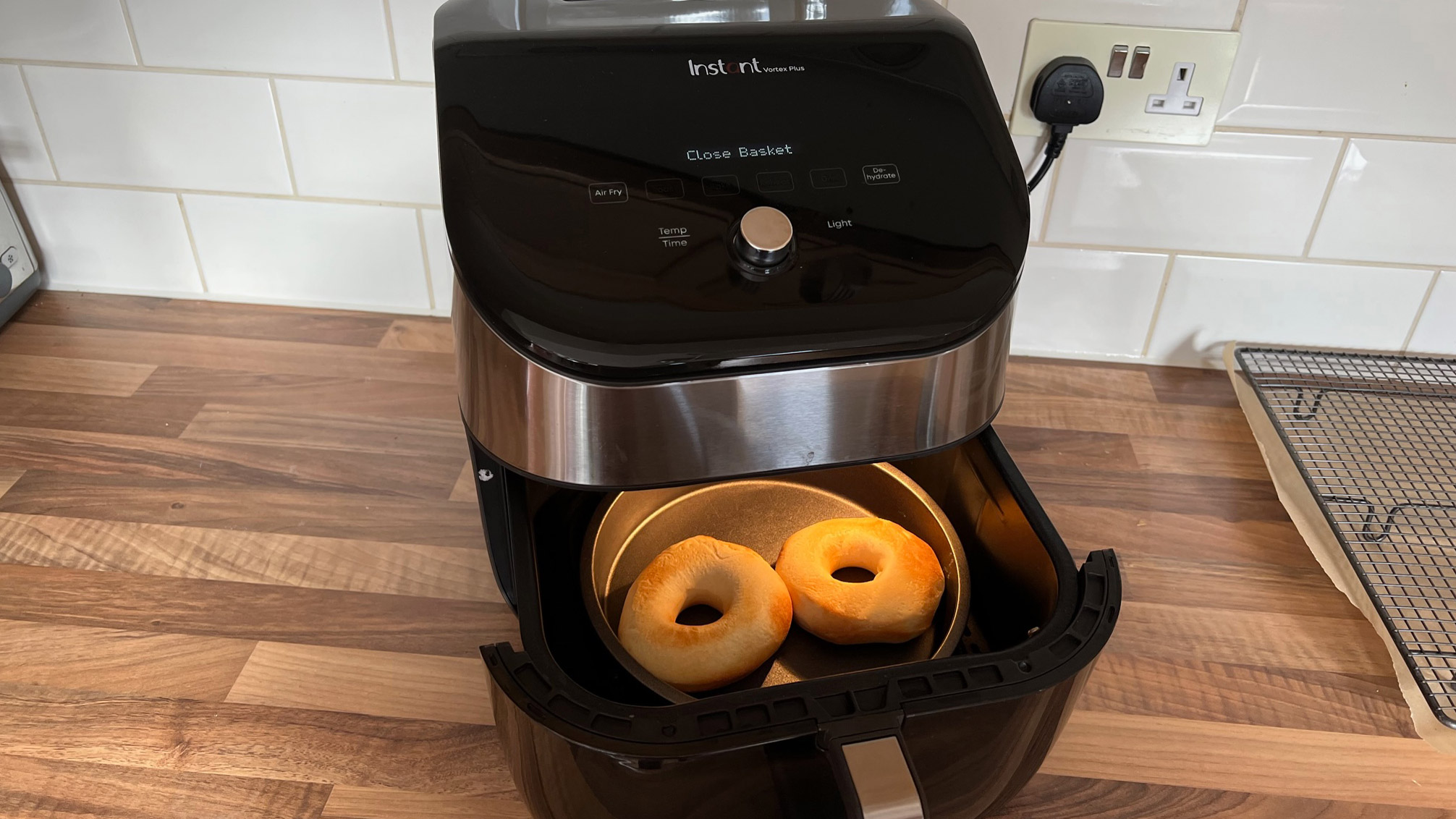 When deep frying donuts, the majority of recipes recommend the oil should be at a temperature of 356 F / 180 C, so I decided to reduce the air fryer to this temperature, and drop the cooking time to five minutes.

I also decided to place the donuts in a metal baking tin rather than place them on greaseproof paper on the crisper plate. This worked well when making cinnamon rolls in an air fryer to reflect the heat, which would help ensure an even color over all sides of the donut. Although, I did make sure to grease the tin with oil first to stop the donuts from sticking.

When this batch finished cooking, it was clear I’d cracked it. The donuts were a soft golden color on the outside, and soft and fluffy on the inside. The edge wasn’t so crispy it made a crack when I bit into either.

There was nothing left for me to do other than whip up a batch of Krispy Kreme glaze and dunk the donuts into it. When my partner tried one, he was convinced I’d cheated and bought a dozen donuts from the local shop rather than having actually made them at home.

I’m thrilled that I’ve found a way to indulge in one of my favorite treats without having to compromise on calorie counting. If you’re a Krispy Kreme fan, then definitely give these air-fried donuts a go. 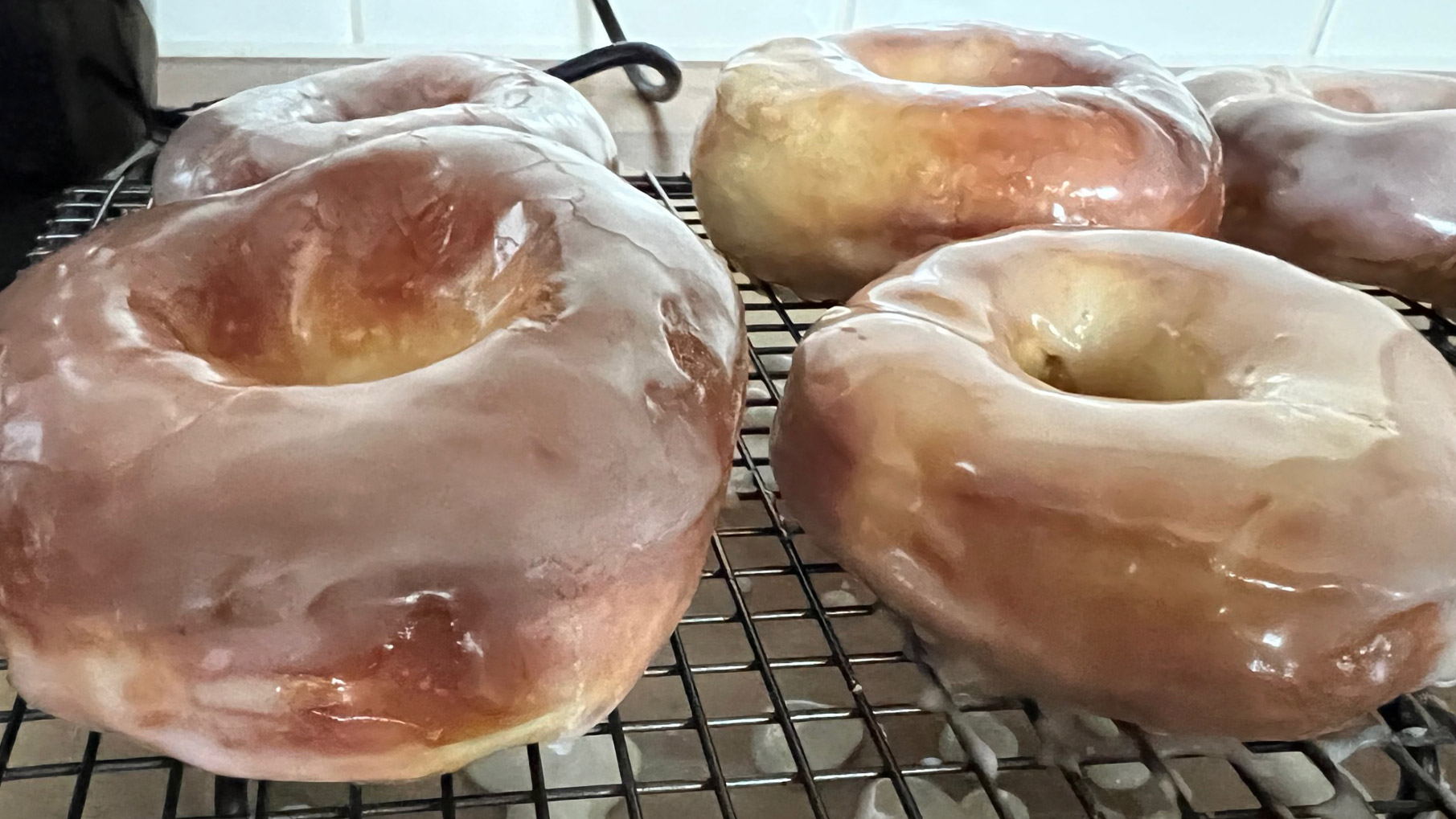 Microsoft brings Amazon’s Twitch back to the Xbox dashboard