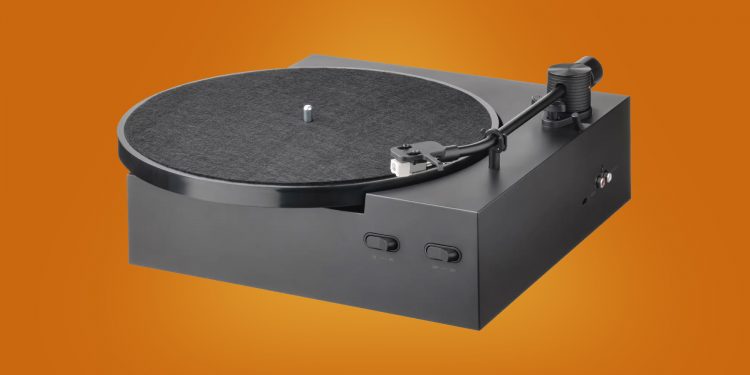 Ikea is all set to join the vinyl revival. The flat-pack furniture maker just launched a new record player as part of a collaboration with electronic music stars Swedish House Mafia.

Unveiled at 2022 Milan Design Week, the turntable forms part of a new collection called OBEGRÄNSAD that also includes a desk for music production plus an armchair, with all three products sharing a sleek black aesthetic.

There’s little in the way of technical details so far available for the record player, so it’s hard to say if it’ll challenge the best turntables our there, but from the promo shots released so far of the striking minimalist box design, it looks far removed from the flimsy excuses for decks you tend to associate with a mainstream retailer.

While not mentioned in Ikea’s press release, eagle-eyed readers may have noticed Audio-Technica’s logo on the stylus, which reassuringly suggests this deck could be a contender.

And you won’t need to fill your room with hi-fi separates; the turntable also has a preamp built in, with the decks powered by a simple USB cable.

While Ikea makes the point of saying the decks team up seamlessly with its own Eneby Bluetooth speakers, it doesn’t look like the decks actually feature wireless connectivity, with the turntable seeming to connect via the speaker’s aux input.

According to Swedish House Mafia, the range’s design “supports creating, playing, enjoying and even just setting the mood.” Commenting on the record player, Ikea designer Friso Wiersma says: “The solid, chunky design gives the player a presence in the room – it transmits the physicality of music in the collection, making it really claim space with the attitude of music woven into it – rather than making it blend”.

While this may be the first Ikea-branded turntable to hit the market since the 1970’s, it’s not the first time the company has dabbled with the idea of releasing a set of 21st-century wheels of steel.

Another collab with uber-cool Swedish consumer electronics brand Teenage Engineering was set to include a record playing device in 2019 but it sadly never saw the light of day.

Ikea’s OBEGRÄNSAD desk will likely be a hit with musos and gamers (Image credit: Ikea)

The OBEGRÄNSAD desk, meanwhile, looks like bit could be a big hit with creative, techy types and gamers. Primarily aimed at home studio music producers, with its pull-out shelf allowing for space for a midi keyboard, it also features two ear-height monitor speaker stands which could endear it to video editors.

No prices are currently available for the new OBEGRÄNSAD range, but all three products are set to drop in stores this autumn.

While there’s no indication at this point whether or not the OBEGRÄNSAD decks will be limited edition, record shop owners will no doubt be keeping everything crossed that they reach as many homes as Ikea’s venerable Kallax shelves.

The vinyl resurgence shows no signs of waning, and an affordable, entry-level record player being offered by one of the world’s biggest retailers would be certain to draw in more music lovers to the record-buying bug.

We’d love to have seen some wireless connectivity onboard, and the ability to pair up with Ikea’s Sonos-friendly SYMFONISK speakers, but that’s perhaps asking too much from a device that probably won’t cost too much more than a family meal of meatballs.

Surveying the coming wreckage: A divergence in consumer surveys adds to recession worries for America

Globalisation and autocracy are awkwardly locked together. For how much longer?