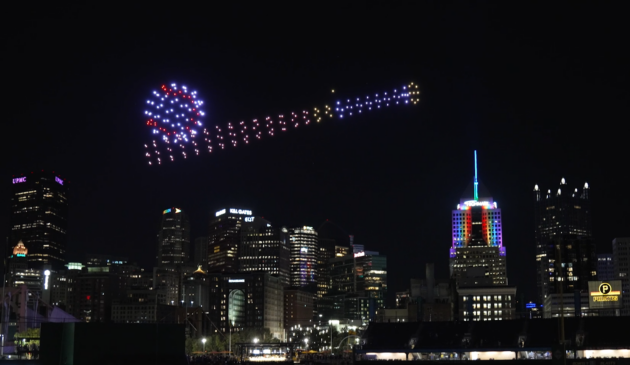 Lighted drones fly in the shape of a baseball and bat over PNC Park, home of the Pittsburgh Pirates, during a show put on by Sky Elements. (Sky Elements Photo)

The Seattle Mariners are the best show in town these days thanks to the winning baseball the team has been playing. Next week, things will even get exciting after a game when T-Mobile Park plays host to a drone light show for the first time.

As part of a July 22 celebration kicking off the countdown to Seattle hosting the 2023 All-Star Game, the Mariners are unveiling a new logo for the Midsummer Classic and putting on a fireworks and drone light show after taking on the rival Houston Astros.

The drone component will utilize 250 drones and T-Mobile says its 5G network will transmit “critical flight information” such as flight paths and telemetry data, to and from the drone command center.

The show promises “signature Seattle baseball-themed visuals” and will be handled by Sky Elements, a Fort Worth, Texas-based company that has put on shows at other Major League ballparks and assorted events around the country.

Rick Boss, head of Sky Elements, grew up in Seattle.

“The Mariners have a special spot for me,” Boss said this week. “So I’m always glad to come back home.”

Boss has been in the pyrotechnic business for about 15 years. He was first attracted to drones when they were featured in a Lady Gaga performance at Super Bowl LI in 2017. Now he works with a team of about 12 employees designing and putting on holiday shows, marketing campaigns and post-game displays for such teams as the Oakland A’s and Pittsburgh Pirates.

His team met with Mariners and T-Mobile Park reps to discuss what they want to see in the show and walk through a storyboard process. The show is designed with 3D animation software in which every done is animated 24 frames a second all the way through the full show.

GeekWire caught up with Boss to discuss whether “fireworks are out,” what goes into creating a drone show and what fans can expect next week at T-Mobile Park. Our Q&A has been edited for clarity and brevity.

GeekWire: As someone who does both, do you think fireworks are here to stay and drones are just a compliment?

Boss: I think fireworks are here to stay. They do things that drones can’t and drones do things that the fireworks can’t, so, like we’re doing for the Mariners, the melding of both fireworks and drones is fantastic. The noise, the bright colors of the fireworks, there’s something about that that just can’t be replaced with the drones. And yet, I can still tell a story more than fireworks can. I can put those iconic images up there that everybody recognizes. It’s just different.

How do you program the show?

We purchase the software that we fly the shows with. It takes a network engineer to really make sure everything is working every time — somebody who understands all the menus and the depths of what’s happening with the software.

Does a show run with the push of a button or is there a person making adjustments as it’s happening?

When we get out to the field, we actually use T-Mobile hotspots. It makes it super easy for us to be able to download information from our home base in the cloud to the drone. Then we synchronize all of the clocks and tell them to go and they take off and they perform the show. They’re sending back real-time telemetry to us through the internet, and we can see all of the information — the performance of the drone, the battery life, if it’s in the right position.

Can you can you give us a little tease on what the Mariners were looking for? There’s a baseball theme, obviously.

I can’t share anything specific. But it’ll definitely be iconic Seattle Mariners imagery, for sure.

You must have stuff in your tool bag. Bat, ball … bat hitting ball.

Every one of our shows is custom designed. Rarely do we clip out pieces from other shows because it’s animated frame by frame. Some of our Fourth of July ones have a little bit of clipping, but it’s actually pretty tough to clip in the animation software, unlike audio or video, because each one of those drones is flying a specific path. And so when you click on an image from a different show, all the drones may be coming from a different direction because the animation before it was different.

This show will have 250 drones. How’s that compare to a typical show?

Most of the Major League Baseball shows that you’ll see are 250 drones. There’s some larger ones, but this is a nice-sized show.

What types of drones are these?

They’re custom-made drones just for light shows, called Uvify. There’s no camera on them, there’s no extra sensory information that you would have on a consumer drone, just to keep the weight to a minimum. And we have RTK (Real Time Kinematic) GPS in there which is not on consumer drones. And we have multiple redundant radio frequencies for safety.

What elevation do the drones reach above the ballpark?

Up to 400 feet is a typical flight pattern. Every time we fly a show, we take a look at [the location] in 3D and we say, OK, here’s an ideal viewing angle, and our designer adjusts for that height. For most of our shows and for FAA regulations we don’t go above 400.

What is the lighting mechanism?

Our LEDs put out about 1,100 lumens, so it’s very bright light on the bottom. All you do is turn on the lights to varying levels and you can create up to 15 million different colors.

How long is a typical show?

Typical show is 10 to 12 minutes. The drones can fly longer than that but we reserve battery life for windy conditions or if there’s a [game] delay, things of that nature.

Have there been advances in the short time you’ve been in this space either with the drone tech or choreography? Or have you got it all figured out?

We’re definitely in the infancy of the drone light show space. The very first drone light show only happened six or seven years ago. There’s been about 400 or 450 drone light shows in the United States, ever, and more than half of those have happened in the last 12 months. The technology is advancing every day. My team is constantly looking for ways to improve the technology, ways to have flights last longer, ways to be safer.

BookWatch: Facebook can change its name to Meta Platforms or anything else, but its current leadership cannot be trusted

: Facebook’s acquisitions of Instagram and WhatsApp are antitrust targets, but its metaverse mergers may be the victims

Chrome 100 could break your website – but Google is on it