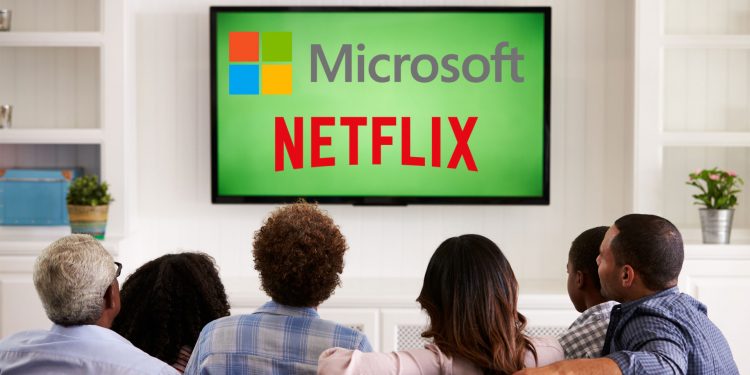 Netflix needs a buyer. Flying solo while content costs and competition skyrocket and subscription levels stagnate or fall is not sustainable. But is Microsoft the right rescuer?

A new rumor suggests that Netflix and Microsoft, which recently climbed on the couch together to binge billions of dollars in ad revenue on Netflix’s upcoming ad-tie-supported service, might become more than just friends. Speaking to Yahoo Finance, Needham Senior Analysis Laura Martin contends this deal is simply Phase One of a wooing process that could bring Microsoft inside until it decides to bring Netflix all the way inside.

“Netflix is trying to get closer to Microsoft in hopes that, after Microsoft digests its Activision acquisition, it turns and buys Netflix next,” said Martin, referencing the still under regulatory scrutiny $68B Activision acquisition. As Martin rightly assumes, Microsoft is unlikely to make any other company buys – at least of this size – until that deal is done. And, oh yes, a Netflix acquisition would be big, massive even. The company is estimated to be worth around $176 billion. A small number of companies only as big as Microsoft, or maybe Apple could afford it.

My immediate reaction to this idea was, “No. Belch. Why? No synergy.” Granted, this was a gut reaction, and not well considered.

The reality is that this could be either an awful or brilliant acquisition for the  47-year-old company.

The why of such a potential acquisition is obvious. Netflix needs a larger company to help shield it from the vagaries of the market while it deals with the ebbs and flows of subscribers and fights and spends to create audience- and award-winning content.

For Microsoft, it’s a chance to compete – again – with Apple, which launched its own original content streaming service in 2019 and has since won a Best Picture Oscar in the process.

That might seem like a slam-dunk idea, but Microsoft has succeeded as of late by realizing that it does not have to be Apple. It’s no longer concerned about having its productivity products only on Windows, with its new strategy being, “put Office on whatever screen you want.” It’s not tied directly to Intel anymore, happily building Windows for ARM systems. Microsoft has a lovely Surface line but doesn’t generate the kind of buzz Apple does for MacBooks and iPhones.

Thoughts of Azure, though, remind me of the obvious synergies.

Netflix, which is hosted on Amazon’s AWS, could move to Microsoft’s Azure cloud infrastructure. I’m sure they’ll get a nice test drive through the ad-server system.

There is a clear entertainment cross-over from Microsoft’s gaming business that includes Xbox, through which many people already watch Netflix, Gamepass, and myriad game studios, some of which are now spawning streaming content of their own (though not on Netflix).

On the awful side: It’s just another tech giant buying another huge company, further consolidating our choices.

Microsoft could force through some awful co-branding ideas, like bundling Office 365 with Netflix (though a Netflix Ad-Tier in Gamepass might name sense). It could start peppering LinkedIn with Netflix promos.

Surely there’ll be some oddball tie-ins with underdog search engine Bing, speaking of which, it just occurred to me that “Bing” is only one letter away from “Binge.”

The reality is, this is just one analysis guessing at what this, to be fair, very important partnership could mean. Microsoft may not feel that way about Netflix. Bingeing ad-supported content is cool, but chilling is a little too much.

Even NASA is an Elder Scrolls Oblivion fan

YouTube’s Snapchat sharing feature sounds cool – but is it just a gimmick?